By now, you should have heard about tweets. Not the sound of birds, but the widely known social media app Twitter. First launched in 2006, Twitter is used today to share ideas, news, and memes as well as to follow the daily-life of celebrities and their opinions.

And that’s just one side of the story. Twitter statistics in the UK show that the platform also brings recognition to millions of brands and businesses around the world, helping them target their audience more easily and thus expand their markets.

Let’s take a look at the numbers behind Twitter. 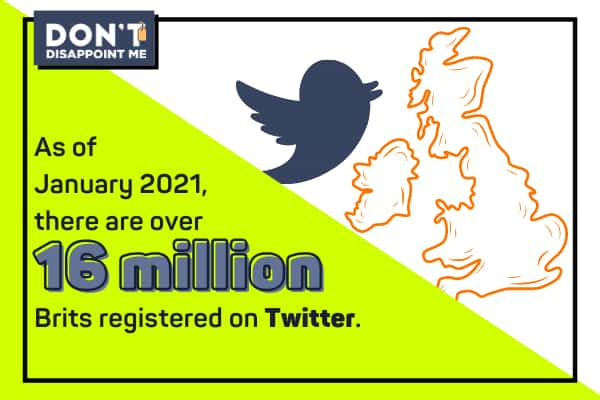 1. How many Twitter users are there in the UK?

As of January 2021, there are 16.45 million Brits registered on the social media platform. This number puts the UK in the fourth position among the world’s leading countries by Twitter users, right behind the US, Japan, and India. In 2020, Twitter had 16.65 million users in Britain or 2.95 million more than in 2019.

What percentage of the UK is on Twitter? According to statistics, nearly half of Brits between the ages of 16-64 went on this social media platform in the last 30 days. Twitter’s usage was higher than Snapchat and LinkedIn, which had penetration rates of 25% and 28%, respectively.

As of 2021, Twitter holds a 25.45% share of all visits to social networking websites. Even more impressive, Twitter trends indicate that this social media site’s share increased from a humble 4.53 per cent recorded in January 2017.

More than 40% of the Brits surveyed on their Twitter usage answered that they visit the site several times per day. Interestingly, only 15% of them accessed the social media platform a couple of times per week.

If you want to reach as many Twitter active users as possible, you should post your tweets during your lunch break or between 12 pm and 1 pm. Moreover, some of the accounts that shared posts between 4 pm and 6 pm also gained decent engagement levels.

When it comes to news, Twitter is ranked fourth as the most used social networking platform, positioned behind Facebook, YouTube, and WhatsApp. It’s still ahead of Instagram, although the Facebook-owned site is catching up quickly. Instagram use grew in 2020, particularly among 18 to 24-year-olds, who prefer the simple stories and captivating visuals on this photo-sharing platform. 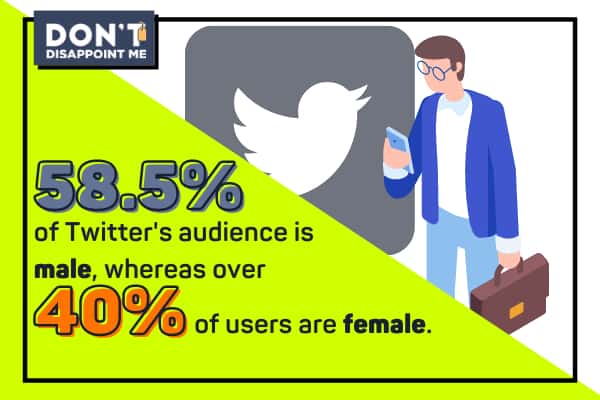 7. Twitter is more popular with men than women in the UK.

According to Twitter, 58.5% of its audience is male as opposed to 41.5% of users, who are female. In fact, YouTube and Twitter are two of the rare social media sites in the UK dominated by men since others, including Facebook, Instagram, and TikTok, have a higher percentage of female users.

69% of UK internet users aged between 25 and 34 use this platform, more than any other age group. Unsurprisingly, Twitter age demographics reveal that the site is the least popular among seniors—only 11% of online adults over 75 and 22% of those in the 65-75 age group use it.

9. 60% of UK internet users living in households with an annual income of over £48k are on Twitter.

Like other social media in the UK, Twitters is more popular among the more affluent households. Thus, Twitter user statistics report that more than half of households with a yearly income of at least £48k access the platform. The same is true for 54% of individuals living in families that earn between £34 and £48 thousand a year.

Who uses Twitter more, big towns and cities or rural areas? Data shows that over half of online adults living in urban areas use this social network. By contrast, only 37% of UK internet users who live in smaller towns and villages across the UK  log on to Twitter. 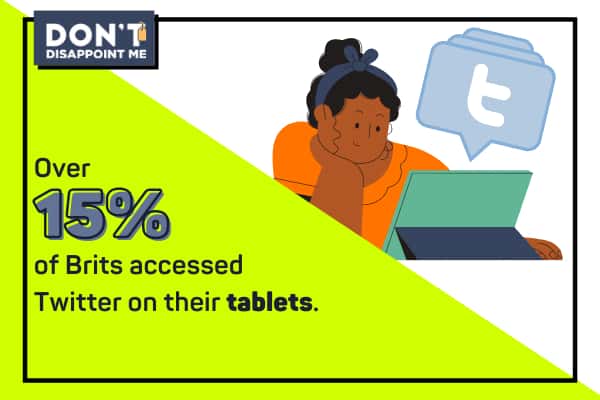 12. Twitter is one of the most downloaded apps on Android and iOS.

These numbers clearly show that Twitter is more popular on iPhones than Android devices.

13. Twitter has more desktop users in the UK than other social media sites.

Desktop computers are the most popular device to log onto this platform. Based on January 2021 Twitter stats from the UK, nearly half (43.7%) of users access the site through desktops. This percentage is much higher than Facebook’s desktop market share, which is close to 26.06%.

Tablets aren’t as popular when it comes to visiting Twitter as desktops and mobiles are. In fact, they are the least used devices to get on this social media site. In contrast, Pinterest and Facebook have a higher percentage of tablet usage, with 20.83% and 60.76%, respectively. 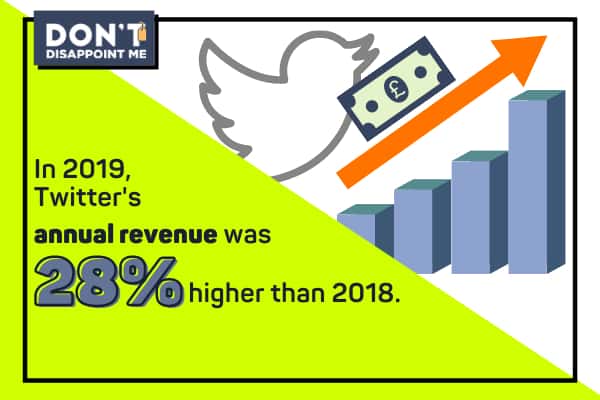 Being the second-largest social media platform can contribute a lot to revenue. In 2019, Twitter’s annual revenue amounted to more than £130 million, or 28% higher than in 2018. Gross profit, however, declined from £3.5 million in 2018 to £2.8 million, which Twitter attributed to extra share-based expenses.

Twitter’s UK branch paid a total of £1.15 million in taxes to the British government, the latest Twitter stats on revenue show. This sum is a drastic increase compared to 2018, when the social media giant only paid £41,000 in taxes.

17. Twitter can reach 29% of the adult population in the UK with ads.

Based on official Twitter data, the number of people the site can reach with ads increased by 0.7%, going up to 16.70 million in 2020. The growth in the number of users at the start and end of 2020 has contributed to a rise of 31% in advertising revenue for this microblogging platform. Furthermore, the company’s Q4 net income amounted to £160 million, much higher than the projected £85 million earlier in the year.

18. Harry Styles is the most popular UK celebrity on Twitter.

The ex-One Direction singer topped the list of the most popular accounts in the United Kingdom, reaching 35.73 million followers as of November 2020. With such a vast number of fans, Harry has surpassed his other five band members, three of whom are also mentioned among the five top UK accounts on Twitter.

Styles is the most popular celebrity, but his account ranks second on the list of the most followed Twitter accounts. The number one position belongs to BBC Breaking News, whose Twitter account has 47.54 million followers. On the other hand, the Premier League, BBC News World, and the Manchester United football club have some of the fastest-growing profiles on Twitter in Britain.

According to the company’s official report, the announcement of the shocking and unfortunate death of Chadwick Boseman became the most retweeted and liked Twitter post in the UK for 2020. Funnily enough, the tweet about free hospital parking for NHS employees from the famous Love Island star Dr Alex George gained a significant number of retweets and likes.

22. British Airways and Nando’s have over 1 million followers on Twitter.

Brits are showing domestic food and service brands a lot of love on Twitter. As of March 2020, British Airways was the most followed airline brand in the UK, gaining a total of 1,272,567 followers.

Nando’s UK was the most followed retail food brand during the same period, attracting over 1.3 million followers. The clear winner is Transport for London, though, leading in the category of most popular service brands on Twitter with 2,422,578 followers.

Twitter Trends in the UK During the COVID-19 Pandemic 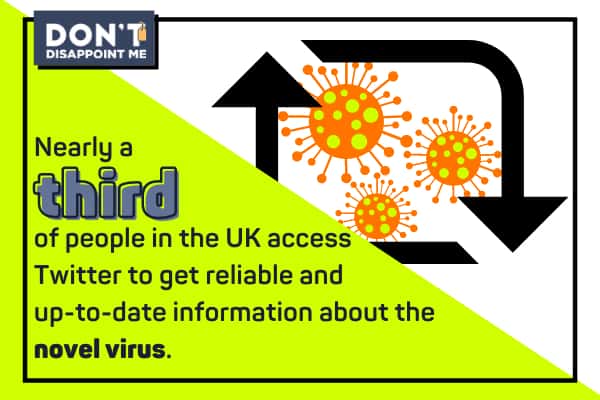 23. 27% of Brits trust Twitter as a source of information about the coronavirus.

According to Ofcom, 27% of people in the UK access the site to get reliable and up-to-date information about the novel virus. On the other hand, a fourth of the British respondents do not see Twitter as a trustworthy source.

24. Abusive tweets toward MPs in the UK have declined during the lockdown.

Politicians in Great Britain have always been the subject of verbal abuse on Twitter, especially when it comes to controversial events like Brexit or the global pandemic. However, facts and Twitter stats in the UK suggest that the coronavirus outbreak has toned down the aggressive language in some of the replies to MPs posts. For instance, when PM Boris Johnson posted that he is COVID-19 positive, only 2.3% of abuse was found as opposed to the usual 5%.

25. Two prominent British conspiracy theorists have been banned from Twitter for posting false information about the COVID-19 virus.

Even though Twitter does not ban the posting of misinformation, in July 2020, the company stated that they would not allow “demonstrably” harmful, fake, and misleading information being posted. This new rule resulted in known conspiracy theorists such as David Icke and Kate Shemirani being banned from the platform, facts and Twitter stats show.

Twitter is more than just a platform allowing you to keep up to date with news and enjoying witty commentaries on current events. Counting over 16 million users in the UK alone, it is also a powerful tool for marketers and business owners.

Even though its leading position might be in jeopardy from other social media sites, one thing from these Twitter statistics in the UK is certain—the popularity of this microblogging platform has no intention of declining any time soon.