When it comes to keeping in touch with our loved ones, especially during the pandemic, messaging apps have been indispensable. Among them, WhatsApp has emerged as the foremost service among British users, leaving its competitors in the dust.

But what exactly is behind this app’s popularity? To answer this query, we’ve compiled some handy statistics. Let’s explore the facts and figures on its usage and see if we can crack the code.

All You Need To Know About WhatsApp In 2021

How UK People Use Whatsapp 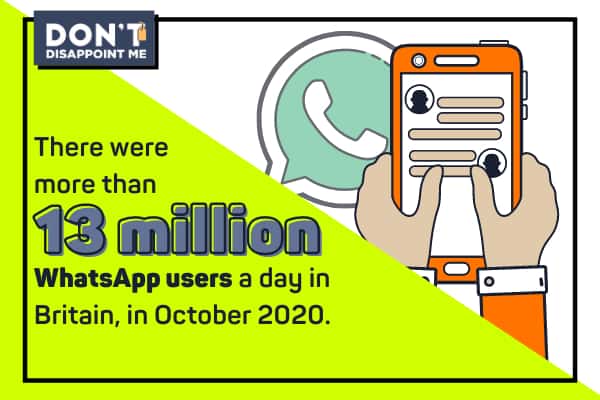 The number of the app’s average monthly active users in Great Britain accounted for 40.41 million in 2020, the third-highest in Europe and seventh in the world. However, whatsapp usage statistics are bound to change, as it’s projected to gradually decrease to 38.35 million by 2025, shedding over 2 million users.

2. WhatsApp had the third-highest reach of all social media sites in Britain in 2019.

Reaching 60% of all online adults, this messaging app was essentially tied in 2019 with fellow Facebook-owned social network Instagram when it comes to user penetration in the UK. Their parent company’s flagship platform Facebook and its Messenger, however, had a whopping 95% share of the online population as users.

When it comes to how many WhatsApp users there were among young people aged 18-24, it was the fourth most popular social media site, with a 66% reach.

3. Three-quarters of online over-15s in the UK used it for messaging during the 2020 lockdowns.

Of British internet users over 15 years of age, 75% reported using WhatsApp during the initial Covid-19 lockdowns in early 2020, making it the most popular messaging service at that time, soundly beating Facebook Messenger’s 58% usage rate.

4. In October 2020 alone, WhatsApp Messenger had over 13 million users a day in Britain.

In October 2020, the most used communication and messaging service in the iOS App Store was WhatsApp Messenger, with nearly 10.1 million iPhone daily active users. At that same time, it was likewise the number one messaging app in the Google Play Store, with approximately 3.25 million Android users per day.

5. How often do people in the UK use WhatsApp?

Recent research shows that in Q3 2020, 73% of WhatsApp users in Great Britain admitted to using this service every day, 94% every week, while practically all of them or 99% reported opening it at least once a month.

6. 30% of internet users view WhatsApp as their most essential social media platform.

A Statista survey suggests that in Q3 of 2020, almost a third of users in the UK considered WhatsApp to be the social media platform they could do the least without. Facebook and YouTube were behind it with 23% and 13% of social media users, respectively.

7. In Great Britain, adult WhatsApp users spend an average of 3hrs 45mins on the app per month.

From December 2019, users aged 25-34 spent the most time per month on this service, namely 4 hours and 27 minutes on average, a 37% increase year-over-year. Next were users aged 35-44, who spent a monthly average of 4 hours and 6 minutes on it. The average time spent was much lower among those aged 55 and older, i.e. 3 hours and 7 minutes.

In September 2020, in turn, Ofcom put the daily time spent per adult user on this app at 7 minutes and 36 seconds, a 29-second increase from November 2019.

8. WhatsApp is the fourth most popular digital service in the UK.

The latest whatsapp stats inform us that the messaging platform got a 76% positive rating from respondents in an early 2021 survey in the UK. The more interesting bit is that 98%, or pretty much all of the surveyed individuals, had heard of the app.

Furthermore, this platform is viewed most positively by millennials (82%), followed by Gen-Xers (79%) and baby boomers (70%).

9. Nearly two-thirds of Brits would recommend WhatsApp to a friend or colleague.

In 2019, about 62.5% of surveyed WhatsApp users said that they were likely to recommend this online brand to people close to them, more than any other. This high percentage put this messaging service in the lead in the UK, trailed by Opera and Amazon, both with close to 55%.

What Demographics Use Whatsapp? 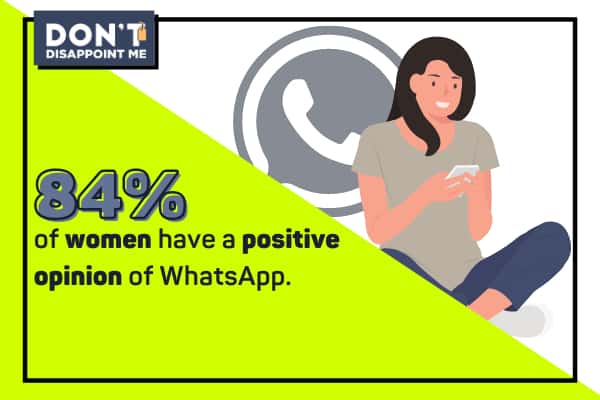 10. Even 8-year-olds are using WhatsApp.

Who uses WhatsApp the most? 79% of Britain’s 15-25-year-olds reported being on it in Q3 2020, making it the third most popular social media site among teens and young adults, behind YouTube with 82% and Facebook with 80%.

However, the ranking of these platforms was reversed in the demo that included those aged 26-35, among whom WhatsApp reigned supreme, ahead of FB’s 80% and YT’s 73%.

According to a 2021 survey, 84% of women have a positive opinion of WhatsApp, making it the second most popular platform in this group. Men weren’t too far behind, with 70% ranking it favourably, but it was only their ninth most preferred app.

13. Urbanites are more likely to use this app.

From January 2018, this messaging service is more popular among city dwellers. Namely, just 46% of adult Brits residing in rural areas used this platform, whereas as many as 61% of those living in urban ones were on it.

Why Do Brits Use WhatsApp? 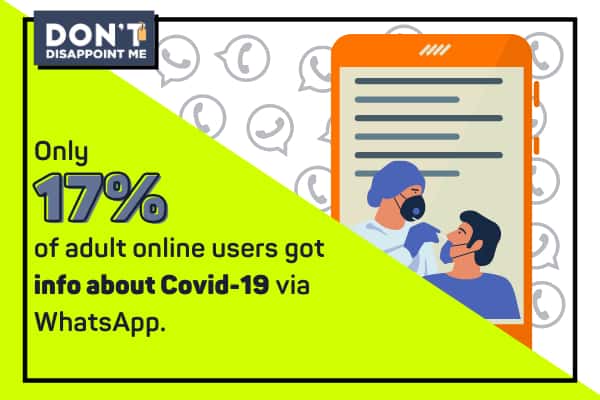 December 31, 2019, is considered the highest-traffic day in WhatsApp’s decade-long history, with approximately 100 billion WhatsApp messages being sent worldwide, more than 900 million of which by users in Great Britain alone.

Why do people use WhatsApp? The answer is: mostly to make voice calls.

With a market share of 72%, it topped all internet voice call service providers among over-16s in the UK in Q1 2021. It even surpassed pandemic must-have Zoom, which 56% of households reported using to make online calls, while FaceTime came in third with 43%.

Looking at how many Whatsapp users there were by age group, it was the most popular app for this purpose across almost all of them, with 78% of those aged 25-34, 76% of those 35-54, and 69% of those over 55 years of age using it. However, younger Brits (16-24) more or less equally used WhatsApp, Zoom and FaceTime for calls.

16. Early in the pandemic, only 17% of adult online users got info about Covid-19 via WhatsApp.

However, two months into the lockdowns, that percentage had practically halved to just 9%. Moreover, during that period, 31% of Brits didn’t find one of the best uses of WhatsApp to be as a trustworthy source of information about the coronavirus, as opposed to 28% who did.

According to Ofcom’s app usage statistics, the most used services for online video calls in the year to February 2020 were WhatsApp and Facebook Messenger with 20% and 18%, respectively.

The proportion of the use of other platforms was:

How Many Times Was Whatsapp Downloaded? 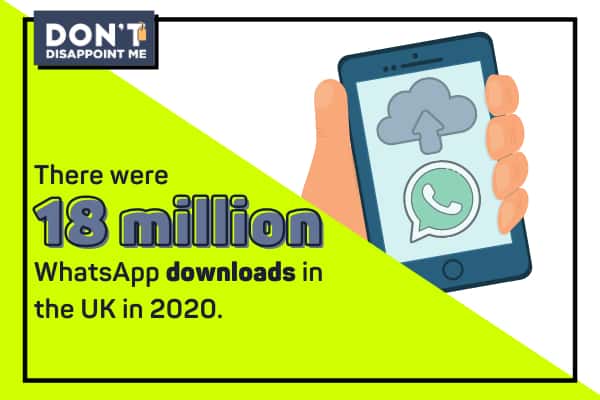 18. WhatsApp was Great Britain’s fourth most downloaded app in 2020.

There were 18 million WhatsApp downloads in the UK in 2020. TikTok, the NHS Covid-19 app and Zoom came out ahead with 22 million, 20 million, and 19 million installs, respectively. Instagram followed with 16 million, while Snapchat and Facebook were far behind them, with 10 million downloads each.

19. WhatsApp Messenger was the second most downloaded iOS app in the UK in April 2021.

Among iPhone users, WhatsApp Messenger was outpaced by the second-hand shopping app Vinted in terms of the number of downloads with nearly 705,000 vs its 693,000. TikTok came in third with just over half a million installations.

When it comes to communication applications, Whatsapp led the pack with approximately 292,000 installs. The following two most installed communication Android apps were Discord and Telegram, with about 271,000 and 254,000 downloads, accordingly.

WhatsApp vs Other Messaging Services 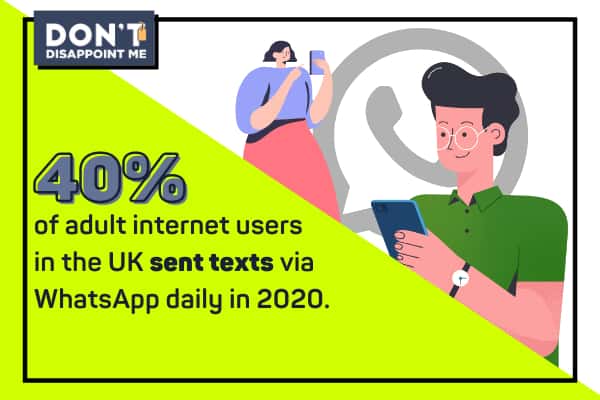 21. WhatsApp Messenger tops the list of most popular messaging apps in Britain.

A 2020 survey of 18-64-year-old instant messaging users showed that 81% of them preferred WhatsApp Messenger over other platforms, using it regularly, followed closely by Facebook Messenger with 76%.

Snapchat was far behind with only 25%, whereas Telegram was among the least used chat services in the UK, with just 3%. When it comes to WeChat vs WhatsApp, in turn, the latter blew the former’s 2% usage rate out of the water.

22. Four out of ten adult internet users in the UK sent texts via WhatsApp daily in 2020.

While the daily use rate of WhatsApp for texting (40%) was similar to that of SMS (41%), the overwhelming majority of adult British internet users used texts for communicating throughout 2020. Specifically, 94% of them had sent texts, whereas 71% had used WhatsApp to message people at least once in the preceding year. However, only 57% used it on a weekly basis, in contrast to the 73% who sent SMS.

Facebook Messenger, in turn, was used by 44% of the UK’s online adults weekly for this type of communication, while the percentages of people using other services for texting were as follows:

23. Among communication services, WhatsApp is the most trusted by Brits.

54% of adult British consumers in 2020 believed that it protected their personal data and used it responsibly, as opposed to 16% who felt the opposite. The second most trusted communication service was Google Hangouts with 53%, followed by Skype with 52% and Instagram with 47%.

On the opposite end of the spectrum, respondents felt that TikTok was the least trustworthy of them all, with 32% expressing suspicion of its ability to safeguard their data. 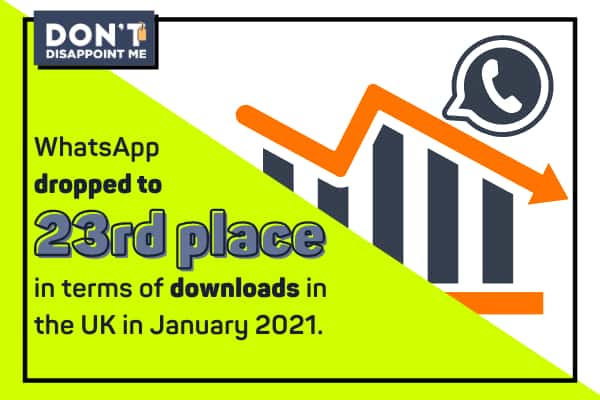 24. In 2020, changes to WhatsApp messages were made to curtail the spread of fake news.

Amid concerns that it was at the nexus of viral disinformation about Covid-19, in April 2020, the app imposed a limit on forwarding messages that had been copied and pasted upwards of five times, now allowing users to only share them with a single contact or WhatsApp group chat at a time. It resulted in a 70% reduction of such communications.

Further, in August that year, it introduced a search button that indicates that a message has exceeded the above number of forwards, allowing recipients to quickly check the veracity of the claims it’s making by searching the web about the topic.

The WhatsApp growth data show that in early January, WhatsApp was the eighth most downloaded app in the UK, but dropped to 23rd by January 12. What happened!? Well, the company announced controversial updates to its privacy policy which drove prospective users away. This caused Signal, which on January 6 hadn’t even been in the top 1,000, to become Britain’s most downloaded app by January 9.

26. WhatsApp has some exciting new features in the works for 2021.

The popular app has a few novelties in the pipeline, including:

Wrapping It All Up

Looking back on these stats and facts, it’s pretty clear why this messaging service has become the behemoth that it is, particularly in the past year or so. Not being able to see our friends and family safely has made everyone far more reliant on digital ways of communicating.

However, will the changes WhatsApp is making keep it on top, or cost it significant chunks of its user base? Only time will tell, but there’s always the next “hot” app ready to take its place, after all.