Have you been dreaming of becoming internet-famous? Well, the perfect app for the job is here—TikTok! This short video-sharing platform has really taken off in the last few years. It’s no surprise that people have been looking for a creative outlet, since they’ve been stuck at home most of the time. Whether you have an idea for a funny bit or want to show off your sick dance moves, the ticket to TikTok stardom is right at your fingertips.

So, if you want to learn how to go viral, let us put you onto these TikTok stats in the UK. 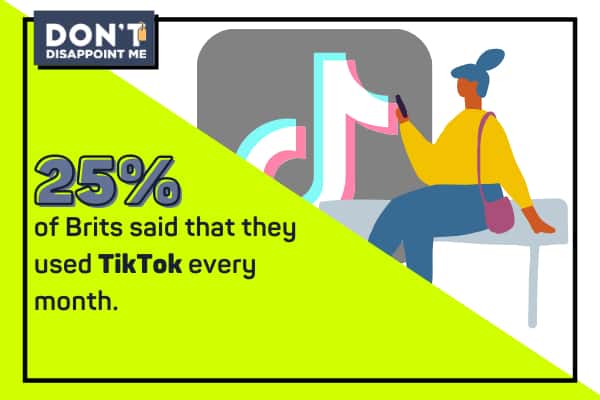 1. TikTok has 17 million monthly active users in the UK.

How many TikTok users in the UK are there? According to the company’s numbers, as of September 2020, the platform draws 17 million monthly active users. Namely, one-quarter of Brits said that they used it every month. The app’s popularity soared during lockdown, since in Q1 of that year, reports had put these figures at around 10 million.

This growth has blown past even the most optimistic projections of 8.5 million users in 2020, since no one could’ve predicted the skyrocketing demand for entertainment caused by stay-at-home orders.

TikTok penetration in the UK has snowballed since its launch in 2017, when just 1.8% of smartphone users had it installed. In late 2019 this rate was 8.7%, and that doesn’t even account for the recent pandemic-related boost. Considering how many people are on TikTok now, this percentage is easily in the double digits.

3. Brits spend over an hour a day on the TikTok app.

TikTok data from September 2020 show that the video platform’s average daily usage in the UK is 66 minutes. They also indicate that Britain’s TikTok active users open this seemingly addictive app a whopping 13 times a day. (We aren’t throwing shade if you’re one of them, though, we swear; we’re all in the same boat!) 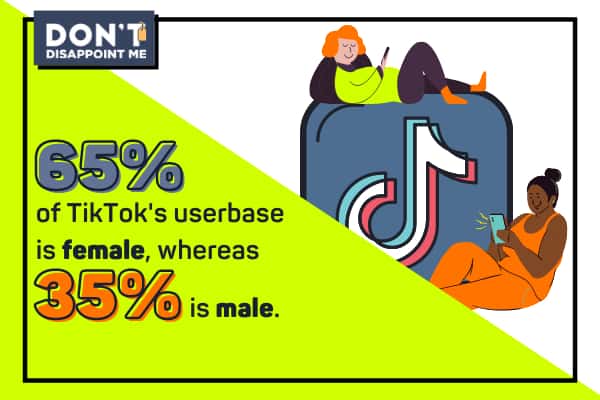 4. In 2020, about two-thirds of TikTok users in Britain were women.

According to Tik Tok user stats, the app is more popular among women in the UK than men. As of September of 2020, 65% of TikTok’s userbase is female and 35% male.

Delving further into the Tik Tok age demographic, that year, more young girls aged 8-15 reported watching videos on this platform multiple times a day than boys did (68% and 49%, respectively), while more of their male peers viewed YouTube clips at least once daily (82% vs the girls’ 77%).

6. Children spend the most time on the TikTok app.

According to TikTok stats in the UK, as of February 2020, youngsters aged 4-15 spent a daily average of 69 minutes on this app, far more than the average time they killed on Instagram—48 minutes or Snapchat—39 minutes. However, YouTube was their favourite platform to entertain themselves on, customarily taking up 75 minutes of their day.

7. British influencers have an average engagement rate of 17.22%.

8. Among influencers, abbyrartistry has the highest engagement rate in the UK.

Among British TikTokers, the account with the highest engagement rate in 2020 was that of abbyrartistry with 26.8%, followed by hollyh with 24.8% and guinnessworldrecords with 23.9%. Fourth on the list was itzshauni with 19.7%, while neffatibrothers was fifth with an engagement rate of 19.1%.

9. The top UK-based TikTok influencer in 2020 was hollyh with 16.7 million followers.

Based on their TikTok follower count, in second place was neffatibrothers with 11.3 million followers, while about 10.2 million people followed abbyrartistry, who also got the most total likes (479 million). The top five were rounded off by guinnessworldrecords with 9.3 million and ankitachhetri25 with 8.1 million follows.

10. British influencers have a higher engagement rate on Instagram than on TikTok.

There’s a considerable difference in UK-based influencers’ Tiktok vs Instagram engagement rates. They may have more followers on the former, but the number of their interactions on the latter is far and away higher.

Let’s use hollyh as an example. Her TikTok account stats tell us that in March 2020, she had 16.5 million followers on this app, but just 1.4 million on IG. However, her engagement rate on TikTok was just 0.58, yet 5.16 on Instagram. It might explain why 97% of British influencers are active on Insta, whereas just 14% are on TikTok.

11. Over a third of marketers intend to use TikTok for influencer ads in 2021.

Perhaps for the exact reasons mentioned above, the platform doesn’t rank high on the list when it comes to being used for influencer marketing, regardless of how many people have Tik Tok. Only 35% of marketers in the US, UK, and Germany reported intending to use it for this purpose, compared to the 58% who planned to use Youtube and the 55% who preferred Instagram.

When it comes to deciding where to place advertisements in order to get the best return on investment, in the same study, marketers generally were in favour of online ads, since over one in five (21%) cited them as their preferred channel, ahead of both Instagram and Youtube (18%) or TV (10%), whereas TikTok by comparison was almost an afterthought with just 6%.

TikTok Revenue Statistics in the UK 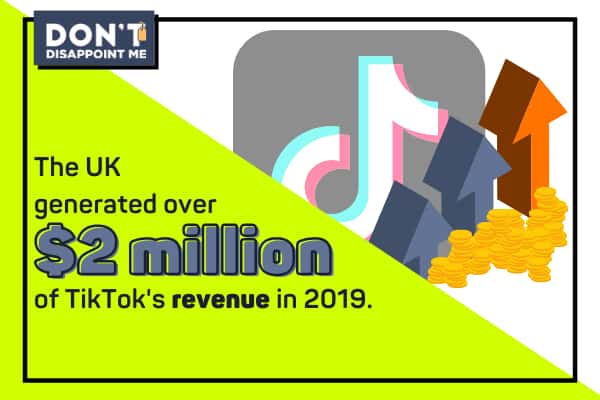 Given its meteoric rise, you might ask, “how much is TikTok worth”? Investors in its parent company ByteDance who were looking to acquire it in mid-2020 put its worth at 50 times the forecasted TikTok revenue for that year of $1 billion.

Storytime: TikTok’s sales and marketing expenses amounted to $109 million, whereas its sales garnered $20 million. It seems that monetisation is proving to be a #challenge for this platform.

Understandably, its home country of China yielded this app’s biggest chunk of revenue in 2019 with 69%, or $122.9 million on iOS devices alone. Behind it was the USA with 20% of the TikTok revenue that year, or $36 million. The UK came in third, contributing 2% of the total TikTok earnings, or $2.4 million. 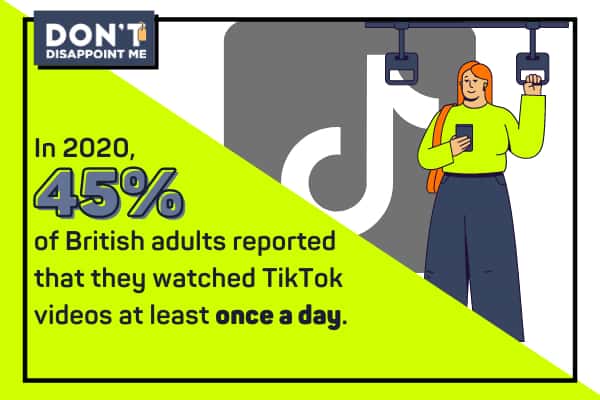 16. TikTok exceeded 1 million page views per day back in January 2019.

How many videos are on TikTok? It’s tough to say, since new ones are uploaded by the second. However, by early 2019, it’d already reached 1 million daily page views.

It isn’t surprising, then, that in 2020, 45% of British adults reported that they watched TikTok videos at least once a day, while a staggering three-quarters of children between the ages of 8 and 15 said the same. Moreover, 28% of adult TikTokers in the UK stated that they uploaded videos weekly, while as many as half of those in the 8-15 age bracket did the same.

17. 55% of TikTok users had uploaded their own, while 68% had watched others’ videos in a given month.

TikTok stats in the UK and US from November 2018 on engagers between the ages of 16 and 64 showed that more than half of them had posted a video that month, while over two-thirds had viewed another user’s clip. Further, 63% had liked someone’s video, whereas 54% had commented on one. Half of the respondents had also shared a TikTok video on some other social media platform.

As of the writing of this article, influencer Bella Poarch’s “M to the B” video posted in August 2020 had garnered nearly 50 million hearts, making it the most liked video on TikTok.

The “Lion at Safari” video, which currently has over 22 million likes, was posted by user emma.cxmpbell and quickly took off, becoming 2020’s most-viewed TikTok clip in the UK. 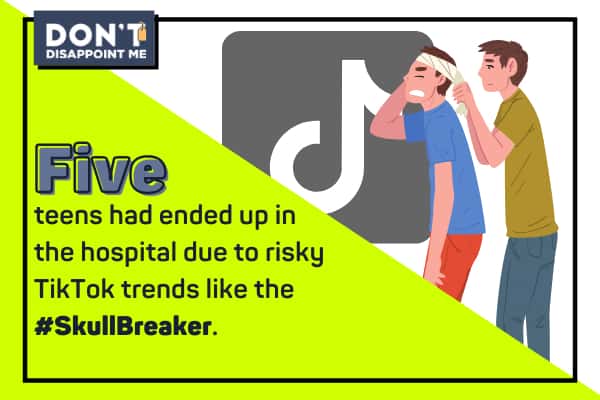 20. Ed Sheeran’s #BeautifulPeopleChallenge was one of Britain’s most popular in 2019.

The #RaindropChallenge, one of the top challenges on TikTok that year with 995 million views worldwide, was likewise a hit in the UK. Another popular one was the #BeautifulPeopleChallenge, started by singer Ed Sheeran.

Of the music/dance challenges, #HitTheWoah and the #YeeHawJuiceChallenge also took the UK by storm, while the #YummyDanceChallenge got 1.4 billion views in the first quarter of 2020 alone.

As the app’s popularity exploded in 2020, risky trends like #SkullBreaker and #PennyChallenge had to be banned in March of that year, since five teens had ended up in hospital, two in court, and one was even killed while participating in them. 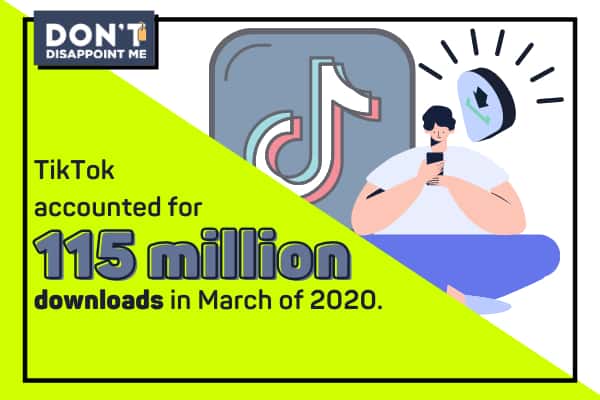 How many downloads does TikTok have? Well, as of December 2020, it boasts 6 billion lifetime downloads around the world. 115 million of those, expectedly, were in March 2020 alone.

23. TikTok is downloaded more often in the winter.

In the UK, the latest stats by device type show that TikTok downloads exceeded 442,000 on Android devices in February 2020 and reached nearly 411,000 on iPhones in September 2019. Whether we look at the Apple Store or Google Play numbers, a similar trend emerges—people are more likely to install it during the colder months.

Tiktok Trends in the UK 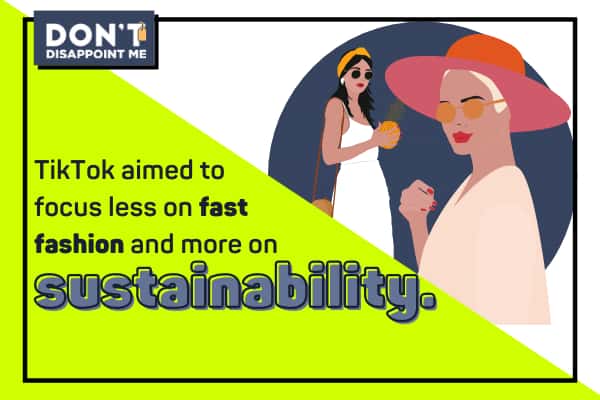 24. TikTok was used to disseminate health information about Covid-19.

Being the third most downloaded free iOS app in the UK in 2020, TikTok has played a role both in informing and entertaining people during the pandemic. The fun bit saw the #blindinglights trend blow up during the first lockdown, with NHS workers and their loved ones dancing to the Weeknd’s hit.

The WHO found a different way to utilize the video platform’s popularity—it live-streamed health-related Q&A sessions with its experts. Scientists working on vaccines also created TikTok content to explain the science behind them and battle misinformation online.

25. TikTok plans to focus more on glamour and shoppable content in 2021.

The company will be cooperating with brands to help monetise their posts, as well as promoting TikTokers who stand for inclusivity, making better purchasing choices and gaining DIY skills. It sounds exciting! We guess the Tiktok stats from 2021 will show how successful the platform was in this endeavour.

And that’s on TikTok stats in the UK. As you can see, this app has really taken the social media world by storm. And it isn’t just for those under 21 either—we’re sure you’d pass the vibe check if you’re a bit older as well—you’re reading this website after all. For that fact alone, we’re positive you’re a total Heather. And now that you’re armed with all this helpful info, you have everything it takes to become a TikTok phenomenon!

So, what are you waiting for? Grab your phone and show the world that you’re a main character!