Mobile phones have become a necessity in the 21st century and play a vital role in our everyday lives, resulting in more people in the UK using mobiles today than ever before.

That said, have you ever wondered how many people use smartphones or how many mobile phones are there in the UK?

Answers to these questions and many more can be found in our smartphone usage statistics in the UK, so make sure you keep reading. 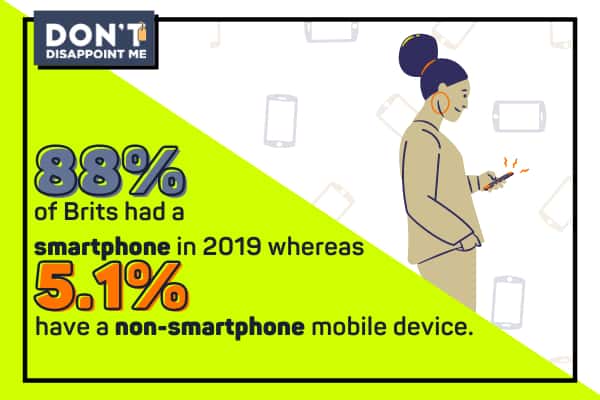 1. How many people own a smartphone in the UK?

With this in mind, the following mobile statistics and forecasts should come as no surprise:

According to the latest mobile phone usage trends in the UK, the majority of UK households, or 40% of them to be precise, have two mobile phones. Furthermore, research shows that 25% have just one phone, 15% have four or more, and only 4% don’t have a phone in their household.

3. The UK ranks 10th in the world in terms of smartphone users.

When it comes to smartphone and phone usage worldwide, China leads the pack as the country with the most smartphone users (851.15 million in 2020). In addition, mobile phone statistics tell us that India, with 345.92 million, and the US, with 260.24 million, round off the top three countries with the biggest number of smartphone users.

From the European countries on the list, the UK is preceded only by Germany, which has over 60 million smartphone users.

4. 95% of smartphone owners use their mobile every day.

Smartphones are not just the most common mobile device; they are also the most frequently used. While 95% of smartphone owners used their mobile daily, the same was true for 67% of laptop users and 64% of desktop owners. Given the high adoption rate of smartphones, there is no doubt that mobile phone usage statistics for 2021 will show an even greater disparity between smartphones and the usage of other devices.

5. Brits spent an average of 3 hours and 23 minutes a day on their phones.

In other words, people in the UK spend around 50 days a year staring at their phones. Time spent on mobile phones is even higher among younger generations. In fact, 16 to 24-year-olds spend about four hours a day on their mobiles. For this generation, the average time spent on their phone translates to about 60 days a year.

6. 32% turn the sound off in an effort to manage their smartphone usage.

Another 31% switch their phone off, and 25% turn off notifications in an attempt to control their smartphone usage. 29%, however, admit to not doing anything to manage smartphone behaviour, even though almost 40% of phone users believe they are overusing their mobiles.

According to a survey on mobile phone usage statistics, 29% paid the average price of £20 per month for their mobile phone contract. However, 22% of respondents said they paid only £10, and another 11% paid up to £40 per month. 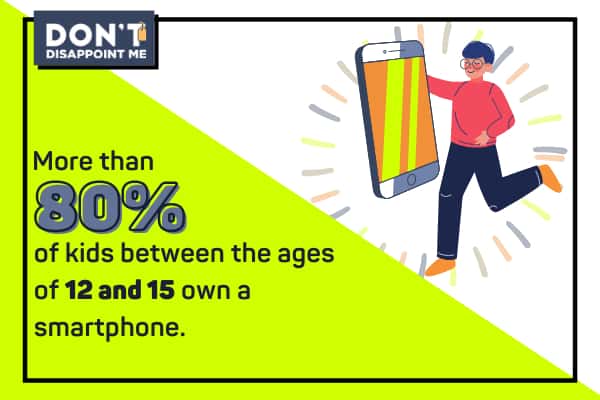 Smartphones are popular among children as well as adults in the UK. Ofcom’s report shows that 83% of kids between the ages of 12 and 15 own a smartphone. Mobile user statistics further indicate that 37% of 8 to 11-year-olds have a phone, as do 5% of 5 to 7-year-old kids.

Although all age groups in the UK use smartphones, data on mobile phone ownership by age in the UK reveals that those between 18 and 24, and 25 to 34 years olds have the strongest adoption rate of these devices — 99% and 98%, respectively.

10. The smartphone adoption rate has nearly doubled for 55 to 75-years old in the past six years.

The biggest change in smartphone adoption in the past six years was noted among older adults. Namely, the number of smartphone users in the 45-54 age group increased from 60% in 2013 to 90% in 2019. Smartphone penetration in the UK in the 55 to 77 age group, on the other hand, doubled in the same period, going up from 40 to 80%.

It’s not just social media. Female mobile phone users spend 67% more time on retail sites and apps on their phones than their male counterparts do. They also spend 71% more time looking at photos and 29% more time on health and well-being services than men.

According to a survey conducted between January and March of 2021, 97% of women stated that they personally use a mobile phone, compared to men who were at 96%.

13. Students in the UK check their phone every 8.6 minutes.

Even though smartphones can be a helpful learning and educational tool, mobile usage among students has some negative consequences. Specifically, one study showed that for every 100 minutes that students spent on their mobiles, they dropped 6.3 places in their academic school ranking.

Mobile Phone Industry in the UK 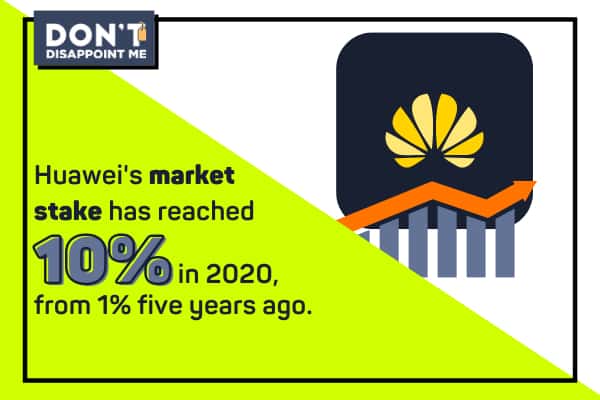 As the most popular mobile operating systems worldwide, it’s not surprising that Android and Apple control the UK market as well. Specifically, Apple has 54.45% of the mobile market share, while Android holds a slightly lower stake or 45.04%.

15. The iPhone 7 and the iPhone XR are the most popular Apple models in the UK.

Taking up an overall share of 7.24%, the iPhone 7 is still the best-selling model in the United Kingdom. This model is closely followed by the iPhone XR (6.84%) and the iPhone 11 (6.18%). The popularity of iPhones in this country is expected. In July, Apple accounted for 46.9% of the UK mobile phone market, ahead of Samsung with a 30.2% stake.

16. As of August 2022, Huawei is the third most popular smartphone manufacturer in the UK.

Data on UK mobile phone sales from the first half of 2022 indicates that Huawei has fallen significantly since Google removed its services, making Huawei sit only on 4.37% of the UK’s market share of smartphone brands, significantly falling since 2020 when it had 10.3% UK market share.

Apple and Samsung are the top 2 leading smartphone brands in the UK, holding 48.85% and 31.05% of the UK smartphone market share, respectively.

17. The majority of users buy a new smartphone every two years.

According to a survey on smartphone sales in the UK, most of the respondents said they bought a new smartphone every two years. What’s more:

18. There are four mobile network operators in the UK.

There are only four main operators in Britain. These are EE, which is owned by BT, O2, Vodafone, and Three. All the other UK mobile operators are considered mobile virtual network operators, meaning they buy the right to use the network infrastructure from one of the main network operators.

Speaking of mobile operators, EE was the most popular among UK citizens having 22% of the total market share. The other operators held a slightly lower stake —O2 had 19%, Vodafone 15%, and Three held 10% of the market.

Mobile telephony services generated over £3 billion in the second quarter of 2020, which is a 5.2% decrease from the previous year. Average monthly revenue per subscriber was £12.7, mostly generated from post-pay users. In fact, the average revenue from post-pay subscribers was £15.55 in Q2 2020, or £10 higher than that of pre-pay users.

The number of active mobile subscriptions rose to 85.3 million at the end of Q1 2022, with additional 1.9 million new subscribers since the previous year which equates to 2.3% increase.

During the same period, the number of mobile broadband subscriptions increased by 0.3 million, which is a 5.6% increase, totalling 5.0 million subscriptions. 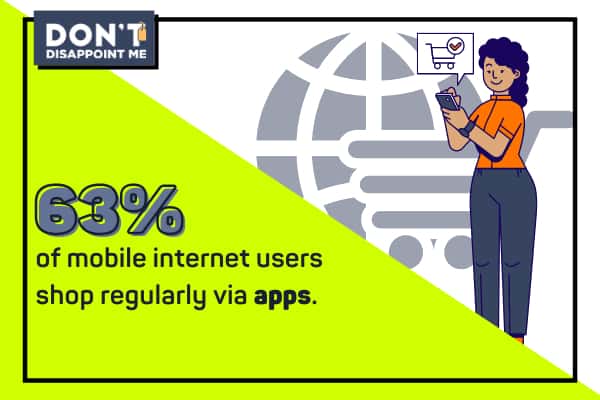 Of the 90% of internet users in the UK who visited an online store, 65% and 33% made a purchase through smartphones and tablets, respectively. Furthermore, 63% of mobile internet users regularly shop via apps, and 23% have used their mobile to scan a QR code.

Mobile commerce sales are also expected to grow in the future. Namely, by 2023, spending through mobile devices is projected to reach $116 billion, which is a considerable share of the $320 billion in total e-commerce turnover (including mobile and desktop spending).

25. Monthly mobile data usage increased by an average of 11GB during the lockdown.

Most of this mobile traffic, research shows, was used to make video calls, one of the most common ways to keep in touch with loved ones during the lockdown.27% said they used mobile data for gaming and 20% cited online exercise classes as the main reason for the spike in mobile data usage. 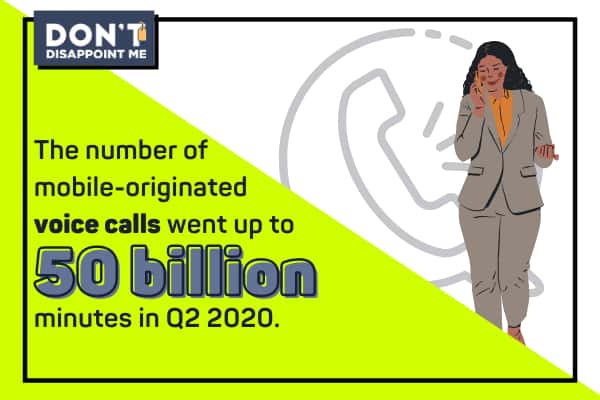 26. 48% of UK citizens use their phones to make voice calls more than once a day.

Given how the very purpose of a phone is to make calls, it makes sense that most mobile owners would use it for that exact function. Thus, the number of mobile-originated voice call minutes was at a whopping 46.9 billion minutes in Q1 2022 and calls to landlines increased to 9.4 billion minutes.

Although this number may seem high, text messaging across the UK has decreased compared to last year. Specifically, in 2019, the number of SMS and MMS sent in the UK was 15.8 billion, coming down by 34.5% to 10.8 billion in 2020. The popularity of communication apps is the main reason for the drop in the number of people using phones in the UK to send texts.

28. Phones are the device of choice for most online activities, research on UK mobile usage shows.

Across age and gender, smartphones were selected as users’ go-to-device for online searchers, watching short videos, making calls (both video and VoIP), and checking bank balances. Users also prefer to use their phones to take videos and photos, check social networks, and read news. 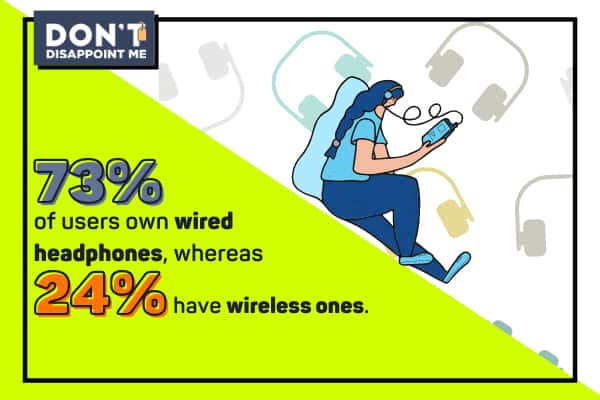 Sales of new devices may be declining, but the market for smartphone accessories is booming. More specifically, the market for hardware products was estimated at almost £2 billion in the UK alone, or an incredible £61.5 billion across the world. These estimates come as no surprise, considering that 24% of smartphone users spend up to £183 on headphones.

30. Wired headphones are one of the most popular mobile accessories— 73% of smartphone owners have a pair.

Wired smartphone accessories are more popular than wireless ones, primarily because of the lower price tag. For instance, 64% of users have wired earbuds as opposed to 17% of smartphone owners who bought the wireless alternative. The same is true for headphones—73% have wired and 24% own wireless headphones.

In addition to audio accessories, many smartphone owners also buy extra power accessories. More precisely, 30% have purchased an additional power bank, 10% have bought a wireless charger, while 15% own a separate cable charge for their smartphone.

Side Effects of Smartphone Usage 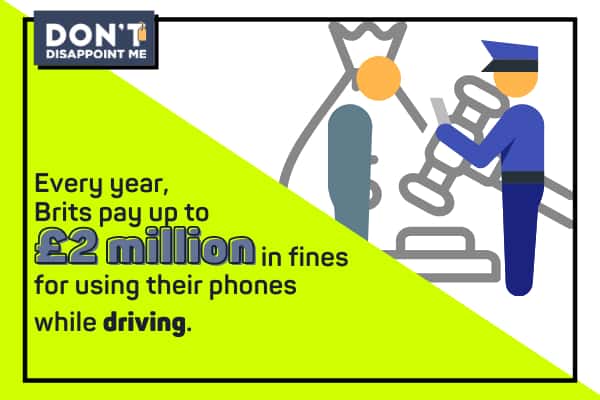 32. Accidents caused by mobile phones were responsible for 33 deaths in 2017.

When it comes to accidents caused by mobile phones, statistics in the UK paint a grim picture. The Department of Transport of the UK reports that mobile phone usage was responsible for a total of 33 deaths, as well as 90 severe injuries and 308 minor injuries.

33. 13.000 drivers are convicted of using mobile phones while driving each year.

There are many pros and cons of mobile phones, and one of the biggest disadvantages is that they can be extremely dangerous when used behind the wheel. That said, each year, there are 13.000 reckless drivers convicted for using their phones when driving, which resulted in combined fines of £2 million a year.

From browsing and shopping to communicating, there’s no denying that mobile phones play a huge role in our day-to-day lives.

Hopefully, our selection of the most important facts and smartphone usage statistics in the UK will help you better understand just how indispensable these gadgets are today and will continue to be in the future.