How Many People Use Facebook in the UK: 26 Fascinating Stats

Today when most people think of social media, they think of Facebook. It probably won’t surprise you to learn that the platform that launched social networking and reached over 2.7 billion users globally, is also quite popular in the UK.

But just how many people use Facebook in the UK every day? Is the number of users going up or down?

We’ve got the answers.

Let’s explore them together. 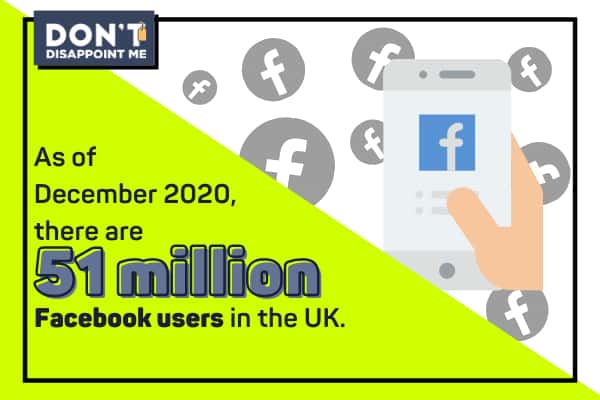 According to Statista, as of December 2020, there are 51 million Facebook users in the UK. That is over six million more compared to December 2019, when 44.86 million Brits used the platform.

Here are a few more figures and facts to demonstrate how popular Facebook is in the UK:

16% of those are Facebook-only users, with adults over 65 years of age being more likely to have accounts on Facebook only. Compared to five years ago, however, the numbers were quite different. Namely, in 2014, 97% of social media users had a Facebook profile, and for 48% of them, this was the only social media account they had.

Mobile phones remain the preferred method of accessing social media networks in the UK, which is not surprising given the country’s high smartphone penetration rate.

Facebook usage statistics for 2020 show that the majority of users log on via their mobile phone, while only 2.2% access the site through a laptop or desktop computer. What’s more, 69.1% only use their phone to log on in contrast to 28.7% who use both computers and phones.

5. Usage of Facebook’s mobile app has declined by 38% in the UK.

Mixpanel estimates that the number of interactions within the app has declined by an average of 2.6% per month, pointing to a spread of Facebook user decline that has affected not just the UK, but the rest of the world as well. Despite the fall in user interactions, Facebook remains the UK’s favourite social media site, dominating the market with a 54.2% share as of October 2020.

6. Brits spend more time on Facebook than any other social media.

According to Ofcom’s latest report, the average UK adult spends 23 minutes and 3 seconds on Facebook every day.  That’s well ahead of Instagram, where users spend an average of 4 minutes 41 seconds, Twitter (3 minutes 45 seconds), and Reddit (2 minutes 30 seconds). 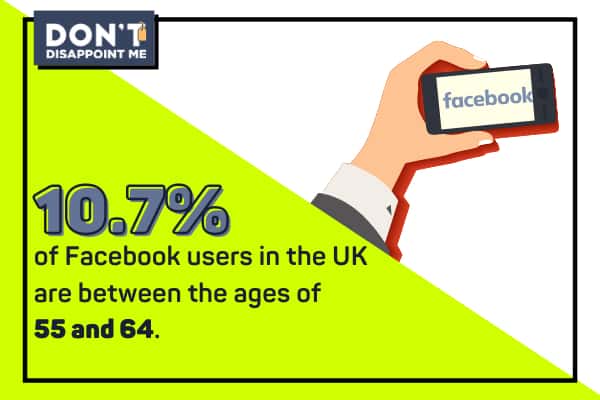 The most common group on Facebook are young adults. Data from December 2020 shows that the average age of Facebook users in the UK is between 25 and 34. On the other hand, the smallest group to use Facebook are those aged from 13 to 17.

Unsurprisingly, the share of older adults using the platform in the UK is much smaller than that of younger generations. In fact, data on Facebook users by age from December 2019 shows that 10.7% of users are aged between 55 and 64, while 8.7% are 65 years of age or above.

10. 52% of the monthly active users on Facebook in the UK are women.

When it comes to genders analysis on Facebook, it seems that women take the lead. In the UK, 52% of users on Facebook identify as female as opposed to 48% who identify as male. These figures put women as the most frequent Facebook users in the UK, which is not that surprising seeing as how the UK has more women than men as a percentage of the population.

11. Facebook users are pretty well-distributed across all income levels.

There are Facebook users in almost every household in the UK, regardless of income. That said, a 2018 survey on Facebook user demographics reveals that 82% of households with an average annual income between £14,000 and £21,000 use Facebook in the UK. 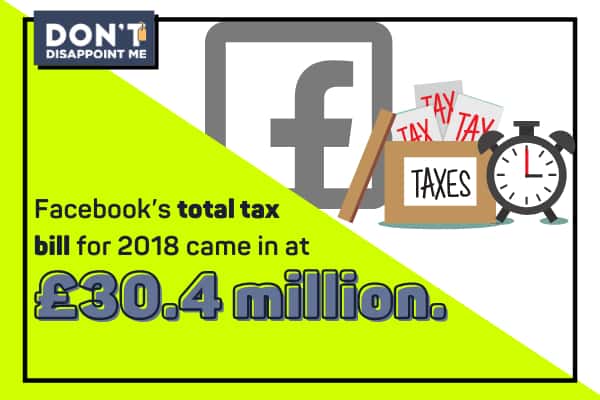 Facebook annual revenue stood at £1.65 billion in 2018, resulting in the tech giant paying £28.5 million in UK taxes. Facebook’s total tax bill for 2018 came in at £30.4 million, but this was reduced by £1.9 million due to deferred tax and the effects of changes in tax rates.

According to research by HubSpot and nanigans, Facebook’s click-through rate in the UK stands at 0.5%, in line with other European countries. The cost-per-click, on the other hand, is relatively higher than the rest of the world. At $1.04 (or  £0.76), the price of Facebook ads in the UK is higher than the global average of $0.39.

16. Facebook ads can reach 37 million people in the UK.

Facebook marketing statistics put the platform’s advertising reach at 65% of the total adult UK population (aged 13 and over). With such a massive audience, it’s no wonder marketers are paying higher costs to advertise on the platform. By contrast, ads on Twitter, one of the most popular social networking sites in the UK, can reach 16.70 million people in the UK, or 29% of the population over the age of 13.

Judging by the number of impressions, Spotify took the lead among the top-rated advertisers on Facebook. In the last quarter of 2019, the music streaming service generated one and a half billion impressions, coming ahead of retail giant Tesco. 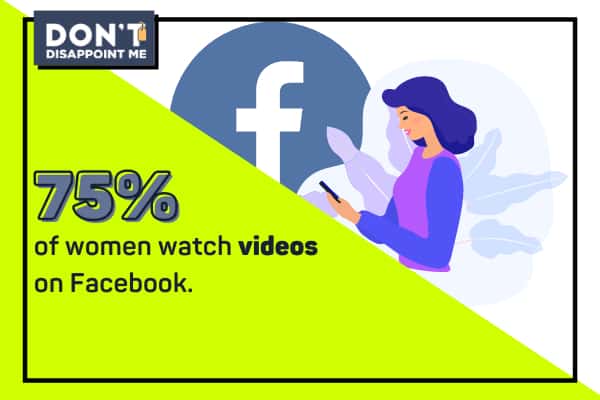 19. More women use Facebook to watch videos than men.

Even though it’s men who spend more time on video-sharing platforms in the UK, women are the biggest users when it comes to Facebook videos. Ofcom estimates that 75% of women watch videos on this social media compared to 61% of men.

20. UK-based entertainment social publisher LADBible was the most popular video creator on Facebook.

With 1.6 billion views across the world, LADSBible was Facebook‘s most popular video creator. It was closely followed by UNILAD and Viral TRND, tied in second place with 1.5 billion views each. 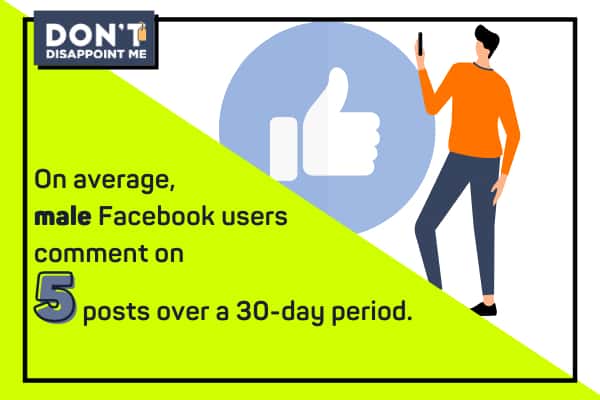 21. The average Facebook page fan engagement with posts of any kind was 3.26%.

Posts on Facebook pages had a reasonably high interaction rate at 3.26%. Still, Facebook facts and figures demonstrate that at 4.48%, video posts had the highest level of engagement from page fans, while Facebook page status posts had the lowest at 2.15%.

The average female Facebook user liked 21 posts in the last 30 days, a survey by WeAreSocial reveals. Men, on the other hand, liked an average of 11 posts in the previous month.

Women also tend to make more comments on posts. In other words, women comment on an average of 13 posts compared to men who make comments on 5 posts. On average, the Facebook user, stats show, comments on 8 posts over a 30-day period.

Despite the popularity of Facebook as a news source in the UK, the majority of Brits (56%) still relied on BBC One for updates, particularly about the coronavirus. Interestingly, people who got their news from social media, like Facebook and Instagram, did not share trending articles or videos as much as they did before the lockdown. 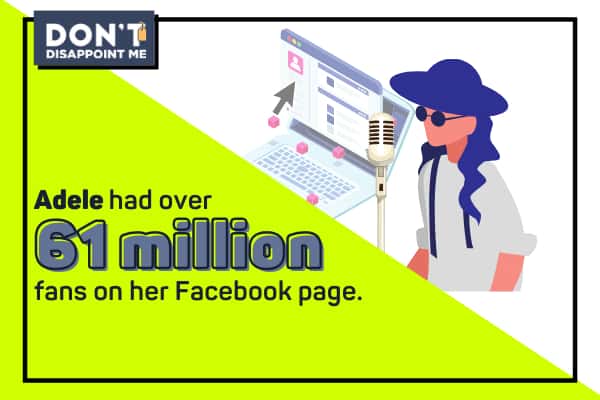 24. Amazon UK is the most popular brand page on Facebook in the UK.

The most popular brand page on Facebook in the UK for the first quarter of 2020 is Amazon UK with 5.73 million local fans. The second most popular is UNREEL, with 4.86 million fans, while The Body Coach, with 3.84 million fans, is ranked third.

25. Manchester United has one of the most popular Facebook pages in the UK.

26. Cristiano Ronaldo is the most followed person on Facebook around the world.

Facebook is the most popular social media platform in the UK and has no intention of being dethroned any time soon, especially when considering how many people use Facebook in the UK.

If you still don’t have an account, perhaps these insightful Facebook stats will inspire you to open one today.