24 Intriguing iPhone Sales Statistics from the UK and Beyond

You must have heard of Apple. After all, it is one of the most renowned companies in the world and maker of the celebrated Mac, iPad and of course, the iPhone.

Did you know that the iPhone is one of the best-selling mobile devices in the UK? And that almost half of users prefer it to Android phones?

Want to learn more about the various iPhone models in Britain?

Then, let’s jump right in these fantastic facts and iPhone UK sales statistics! 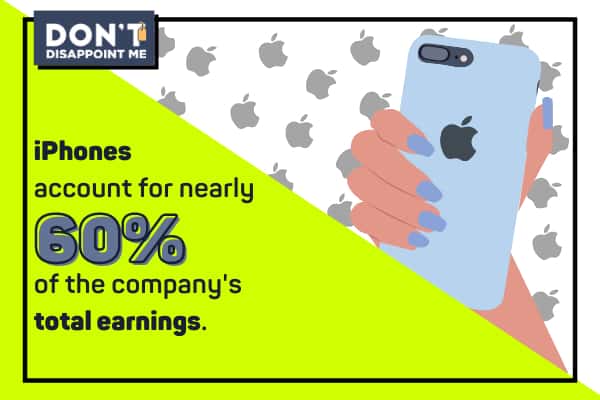 Today, iPhones bring in more than 60 billion for Apple, far more than other categories of products. A comparison of 2021 quarterly results reveals that wearables and accessories generate $12.97 billion, while sales of Mac and iPads make $8.68 billion and $8.44 billion, respectively.

So, what percentage of Apple sales is iPhone?

iPhones account for 58.9% of the company’s total earnings. iPhone revenue traditionally makes up about half of the tech giant’s income, so this is not surprising. That said, the highest share ever recorded was in the first quarter of 2018, when iPhone sales made up 69.74% of quarterly revenue.

iPhones have been growing in popularity from the first time they were released back in 2007. Since then, the company has shipped an astounding 700 million iPhones, with sales peaking in 2015. Official Apple sales data reveal that a record-breaking 231.22 million units were bought that year.

This growth is impressive in itself, but it’s doubly more so in a year of lockdowns, financial crisis and pandemic panic. Even though Apple no longer provides data on the number of phones it sells,  research firm IDC estimates the company shipped 90.1 million iPhones in the last quarter—the largest number of units shipped since IDC started keeping track.

4. How many people own iPhones in the UK?

As of March 2021, 51.16% of the mobile device vendor market in the UK belongs to Apple. 28.51% goes to Samsung, while Huawei comes in third with an 8.02% stake in the market. Motorola, Xiaomi and Google account for a much smaller share, or approximately 2% each.

6. iPhone 8 is the most popular iPhone model in the UK.

According to a YouGov survey, 49% of Brits have a favourable opinion of this iPhone, making it the best-rated in the country.

The iPhone 8 is ranked number one among women and millennials—54% of female respondents gave this phone a positive rating, as did 67% of 25 to 40-years-old.

7. The iPhone 6 is the most famous model among British users.

93% of people have heard of this model, which puts the iPhone 6 at the top of the list of most famous phones. Like the iPhone 8, this model is also slightly more popular with millennials and women. In fact, it’s the third best-rated iPhone with both these groups.

8. Judging by iPhone traffic, iPhone 7 is the most used model in the UK.

The iPhone 7, holding a 7.24% share of all iPhone traffic, is the most widely-used model in the United Kingdom, DeviceAtlas reports. Incidentally, iPhone 7 sales figures show this model to be the most popular iPhone worldwide as well.

Stats on iPhone 11 sales reveal that 37.7 million units of this model were shipped last year, more than the other best-selling phones combined. The iPhone SE 2020 (8.7 million units) was second in line, whilst the iPhone XR (8 million units) followed right after.

10. The iPhone 12 and iPhone 12 Pro are the latest models available on the market.

The newest iPhone models, released in 2020, come with a range of features that will satisfy even the biggest critics. With their A14 bionic chip, known as the fastest chip in the world, new iOS 14 version, and 5G connectivity, these new-generation models are sure to be another huge success for Apple.

Introduced on the market on June 29, 2007, this model was known only as the iPhone until 2008, when the iPhone 3G was first presented. The original Apple phone could only handle 128 MB of memory, and it had a 2.0 megapixels camera. Haven’t iPhones come a long way? 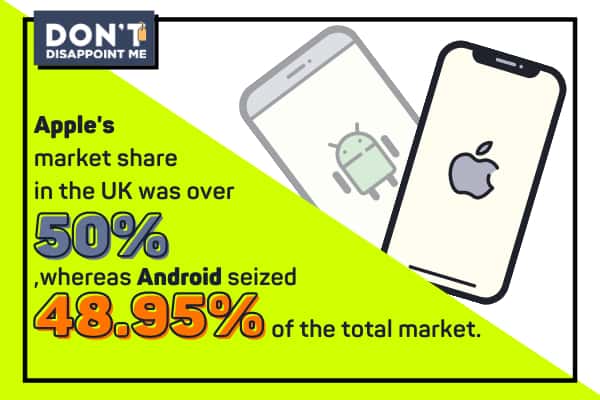 Apple iOS market share in the UK reached 50.85% in December 2020. Despite slight ups and downs, the percentage of iOS devices on the British market has remained steady throughout the years. The highest share was recorded in November 2018 when iOS took up an impressive 60.36% of the market. On the other hand, the market share of Apple’s mobile operating system was lowest, or 40.8%, in December 2011.

15. Apple’s market share was higher than Android’s in December 2020.

Apple and Android are in constant competition to take the leading position in the mobile market. However, the latest figures on the Android vs iOS market share in the UK show the latter is winning. Namely, as of December 2020, Apple’s market share in the UK was more than 50 per cent, while Android seized 48.95% of the total market. 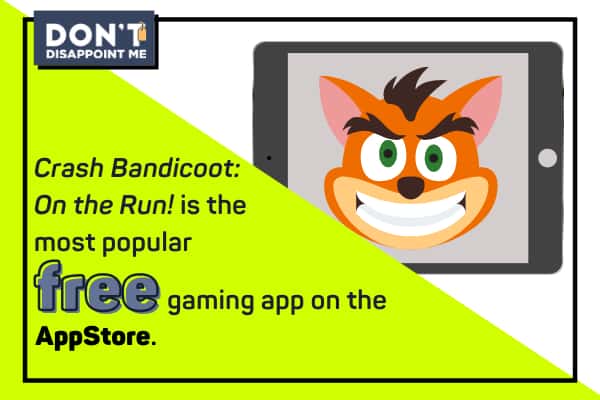 Apple’s iOS App Store revenue increased steadily throughout 2020, with gaming apps making up the lion’s share of profits. In fact, in the last quarter of 2020, the App Store made $13 billion (£9.4 billion) from games and only $8.4 billion (£6 billion) from the non-gaming sector.

Nowadays, iPhone users can choose to download from 2.1 million different apps from the iOS App Store, statistics suggest. This number is a drastic increase from the 500 apps available in 2008 when the store was first launched.

Although the number of available apps in the App Store is incredibly high, this online store comes second after the Google Play Store, which boasts 3.15 million available apps.

Gaming apps may be the most popular, but there are other widely-used mobile apps for iPhone users, such as:

Medical and reference apps are some of the least popular, each accounting for just 1.93% of active applications.

With more than ten million daily active iPhone users in the UK, WhatsApp is the leading app on the Apple App Store. Business app Microsoft Team and entertainment application TikTok are ranked second and third, respectively.

Theory Test 4 in 1 Kit 2021 is number one when it comes to paid apps, whereas dating app Tinder is the highest grossing.

Seen by category, the latest app usage statistics in the UK show the following:

Knocking WhatsApp from the throne, Zoom had the biggest number of downloads in the UK last year.

As app download statistics from the UK show, Zoom is followed by the NHS’s Covid-19 app, which quickly rose to the second position in 2020 even though it wasn’t launched until September. Entrainment platform TikTok, WhatsApp and communication app Houseparty complete the list of the top five most downloaded free apps by iPhone users in the United Kingdom.

iPhone vs Other Smartphones 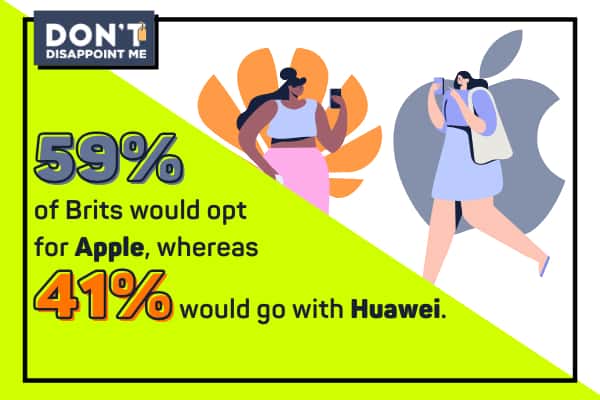 22. 59% of Britain’s smartphone users would choose Apple for their future smartphone purchases.

In August 2020, a Statista survey reported that 82% of smartphone users in the UK would select Samsung the next time they buy a phone. 59% would opt for Apple, making it the second most popular brand on the smartphone market, whereas 41% would go with Huawei.

23. What percentage of phones are iPhones?

24. Apple had five models among the top best-selling smartphones in 2020.

A 2020 report from Omdia shows that five out of the ten best-selling phones in H1 2020 are iPhones, with iPhone 11 ranking as both the highest-selling iPhone and smartphone. Next is Samsung’s A51 with 11.4 million sales and Xiaomi Redmi Note 8, which recorded 8 million sales in the first six months of 2020.

iPhones are the most popular smartphones in the United Kingdom. And with new technologies and advanced models coming out every year, it will be difficult to take the US-based company down from the number one position.

Do you have an iPhone or an Android? Have these iPhone sales statistics inspired you to go over to Apple’s camp and take your pick from the variety of options and features available?

Let us know in the comments.