Do you have a social media presence? You’re not the only one. Today, over 4 billion people around the world use social platforms, a number that is only expected to increase in the future.

To find out how popular social networks and communication apps are in the UK and how fast their user base is growing, check out the social media statistics from the UK we prepared for you.

Social Media Reach in the UK 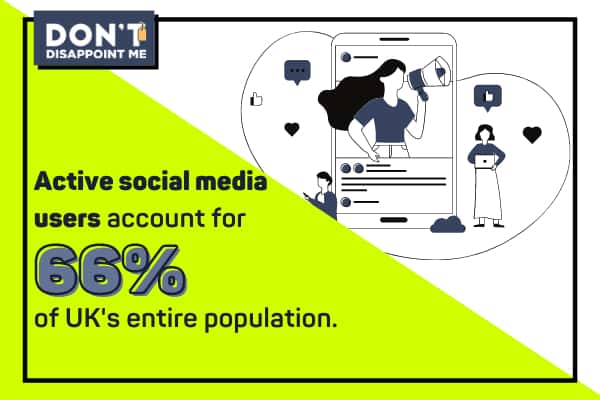 1. There are 45 million active social media users in the UK.

There are 65 million internet users in the UK, the majority of whom have a social media profile. More specifically, 2020 social media use statistics show there are 45 million active users of social networks, accounting for 66% of the UK’s entire population. In terms of social media penetration, Britain is well above the global average of 45% and ranks 18th on the worldwide list.

4. UK adults spend over an hour on social media every day.

As of September 2019, UK adults spent an average of three and a half hours online each day, the majority of which, or 1 hour and 8 minutes, is spent on social platforms. As the biggest users, 18-24 year-olds spend the most time on social networking sites, or 1 hour and 36 minutes as per the latest social media statistics in the UK.

6. More than half of social media users know that personal information can be collected through networking sites.

When it comes to privacy issues and trustworthiness, Ofcom discovered the following:

These social networking statistics prove that even though the majority of users are aware of the dangers of social media, they still exhibit quite a lot of trust in the information they find on the internet.

Today, Brits have an average of 7.1 social media accounts. Even though Facebook is the most popular site, the number of users who only have an account on this platform is decreasing. Seven years ago, 48% of social media visitors used Facebook only, which dropped to 16% in 2019.

8. 19% of internet users in the UK discover new brands through social media ads.

Despite the widespread use of social media, marketing statistics show that these sites are not that prominent regarding the introduction of new brands. In fact, they are ranked seventh on the list, preceded by search engines, ads on TV, word-of-mouth, and in-store displays.

9. The best time to post on social media is Wednesday.

Knowing the best time to post on each social network can be a superior advantage for users, but even more for marketers.

Let’s take a look at peak engagement times of each social platform, according to Sprout Social:

Now that we’ve seen how many people in the UK use social media, let’s break it down by platforms. 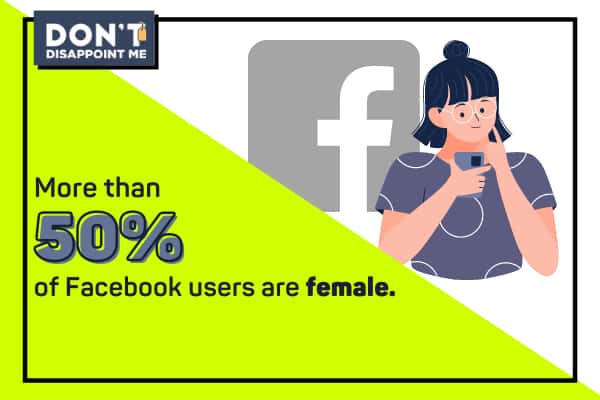 10. Facebook is the most used social media platform in the UK.

Facebook is the UK’s leading social network. As of December 2020, there are 51 million UK Facebook users, an increase of 6 million compared to December 2019. Even more impressive: Facebook holds 54% of the market, which is twice as much as Twitter.

11. Individuals aged 25 to 34 are the biggest group of Facebook users.

12. In the UK women visit Facebook more frequently than men.

Even though both women and men are represented almost equally within this demographic, female Facebook users are somewhat more frequent on the site. Namely, social media stats tell us that 52% of Facebook users are females, and 48% are men.

14. The Facebook page of Manchester United has the largest audience in the UK.

The most popular Facebook pages in the UK, with the largest number of fans, are:

As we can see, sport and music-related pages dominate with the majority of Facebook users visiting these pages. 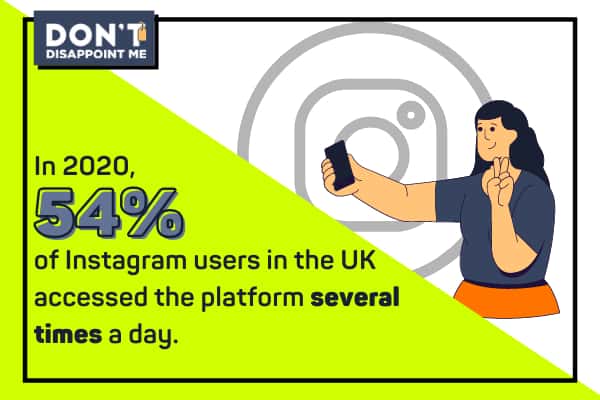 15. There are 30.6 million Instagram users in the United Kingdom.

With the growth of internet penetration in the UK, the usage of Instagram has reached record-breaking levels. Today, Instagram sits as the fourth most popular social media platform in the UK, with a whopping 30.6 million users.

An analysis of Instagram demographics in the UK shows that this is a platform favoured by younger users. As with Facebook, 25 to 34 year-olds make up the largest share of users with 30.1%, followed by the 18 to 24 age group. Those aged 65 and over account for the smallest share of users and are thus the least likely to have a profile on this platform.

More than half of Instagram users in Britain are females. More notably, 57.1% are female users, while men account for almost 43%. Moreover, the majority of visitors on this platform in the UK are women under 24 — a survey by Statista shows that 71% of women between the ages of 15 to 24 use Instagram.

Social media use in the UK is thriving, and Instagram is no exception. According to Statista, in 2020, 54% of Instagram users in the UK accessed the platform several times a day. Only 12% of them, on the other hand, reported using Instagram a few times per week.

19. David Beckham is the most popular UK influencer on Instagram.

As the fifth biggest site in the UK, in terms of reach, Instagram poses an incredible opportunity for celebs to connect with the fans. 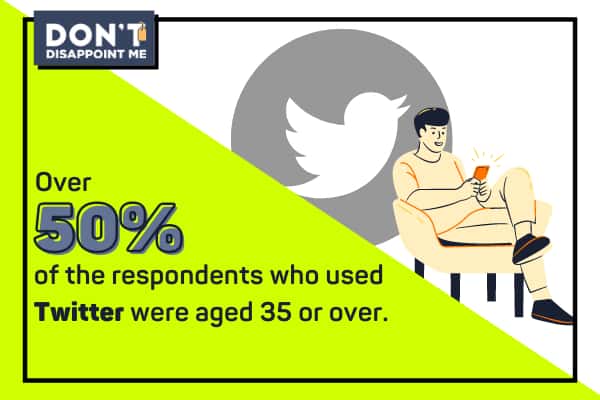 Have you ever wondered how many people in the UK use Twitter? As of October 2020, the United Kingdom is among the top five leading countries based on the number of Twitter users, with 16.65 million. Social media stats from the UK further indicate that the number has grown significantly from 2019 when there were 13.7 million Twitter users.

Data on Twitter demographics and usage reveals the following:

22. Dua Lipa’s Twitter profile was one of the fastest-growing in the UK in December 2020.

According to Social Baker’s social media stats, these are the fastest-growing Twitter accounts in the United Kingdom for December 2020.

TikTok Usage Stats in the UK 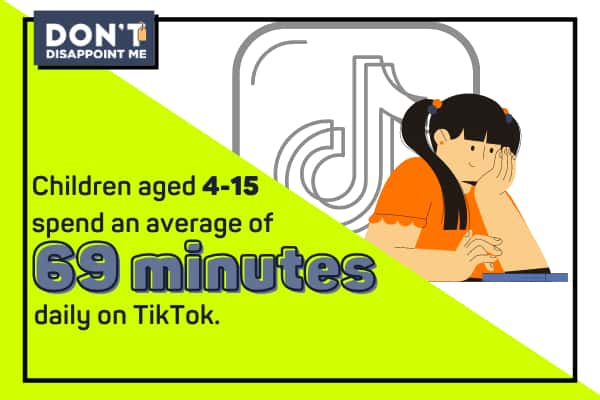 24. TikTok has more than 3.7 million users in the United Kingdom.

TikTok had its biggest success in March 2020 when the app was downloaded 115 million times, 745,000 of which were in Britain alone, social media consumption statistics in the UK reveal.

According to Airnow, this video-sharing platform had 6 million monthly active users in the UK in May 2020, a considerable growth from 2017 when TikTok was launched.

25. TikTok is most popular with Gen Z.

Who uses TikTok in the UK?

With so many of us staying at home, watching video content as well as creating it became a regular pastime. No wonder TikTok emerged as one of the biggest social media trends for 2020 in the UK and the rest of the world.

Let’s take a look at which were the most viewed and shared TikTok videos of 2020: 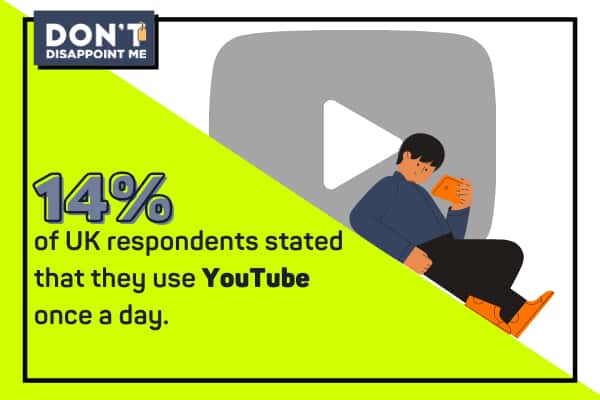 Data from Q3 2019 reveals that YouTube is the most active social media site in the UK. With over 78% of people reporting that they use the platform, YouTube has an incredibly high reach in the UK, even edging ahead of Facebook (73%) and WhatsApp (62%).

A closer look at YouTube user statistics shows that:

A Statista survey of around 2000 respondents shows that almost 20% access the platform several times a day. 14% use YouTube once a day, while 17% do so once every few days. Surprisingly, 21% of respondents reported that they never used the video-sharing platform.

Topping the list with £240,500 per video and over 34.5 million subscribers, Vlad and Nikita earn the most per video on YouTube. Next in line are Dude Perfect making an estimated £231,800 per video and Anastasia Radzinskaya, whose channel Like Nastya earns her about £198,700 per video.

30. With over 18 billion views, Ed Sheeran’s YouTube channel is the most popular in the UK.

These are the five most popular YouTube channels in the UK:

Communication Apps Usage in the UK 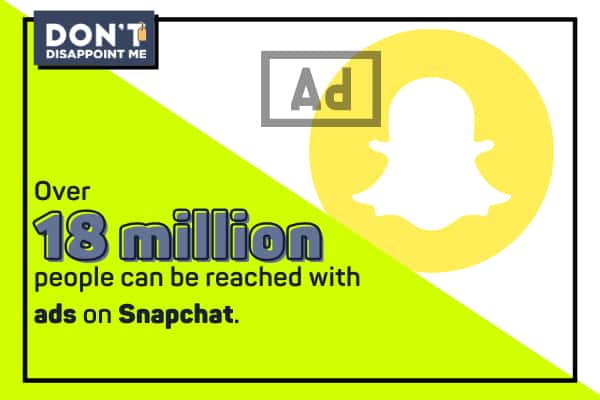 As a result of the increasing number of internet users, as well as the nationwide lockdown at the start of the year, communication apps like Whatsapp, Messenger, and Snapchat saw the number of users and downloads skyrocket in 2020.

The latest stats and facts on these apps in Great Britain look like this: 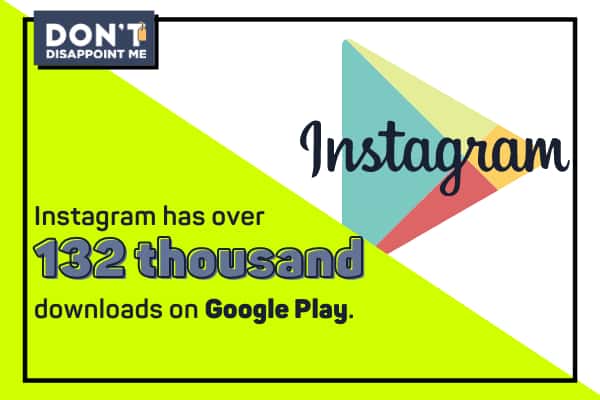 31. 98% of active social media users log on to their accounts through mobile phones.

Ofcom reports that eight in ten adults are smartphone users in the UK, while an impressive 71% of time spent online is smartphones. Keeping these stats in mind, it’s no wonder the majority of British social media users access their accounts through mobiles rather than desktop.

33. WhatsApp is among the five most downloaded apps on Apple Store.

These platforms are preceded only by ZOOM Cloud Meetings and the NHS’s COVID-19 tracing app, the popularity of which has soared as a result of the coronavirus pandemic.

Based on reach, YouTube is ranked third both on Androids and iPhones. On Android phones, it’s preceded by other Google-owned apps, Google Play and Google Search. By contrast, on iPhones, it stands behind social media sites Instagram and WhatsApp.

The Impact of Covid on Social Media Usage 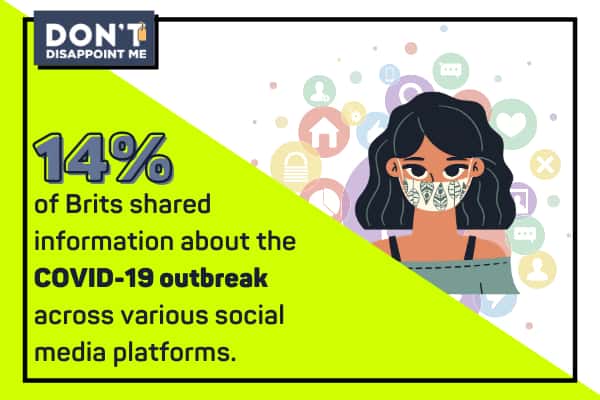 With the COVID-19 outbreak and quarantine shaping most of our existence in 2020, the role of social media and communication platforms has reached a new peak, especially when it comes to reading and sharing news about the pandemic.

The coronavirus affected not just what people read or watch, but what they post as well, media consumption statistics in the UK suggest. More specifically, YouTube sees tens of millions of search queries and billions of views related to the COVID-19 pandemic. Furthermore, Twitter reported that 13% of UK tweets are currently about the novel coronavirus.

37. The UK government is working with social media influencers to stop the spread of the coronavirus.

In a bold move to prevent the spread of the novel coronavirus, the British government has paid several media influencers, typically those with 1.5 million followers, to promote the NHS test and COVID-19 contact tracing app among the UK population.

As we can see from these social media statistics in the UK, networking sites have never been more popular. No one can tell what will happen in the future, but based on current trends, it’s highly likely that social media will only continue to grow both in popularity and usage. So the best thing we can do is go with the flow and enjoy the future benefits social media might deliver.