24 UK Credit Card Statistics That Are Right on the Money

Payment cards are nothing new—they’ve been around since the original Diners Club was established in the 1950s. However, they’ve certainly evolved a lot since, with the recent pandemic being a major catalyst for their increased uptake.

But exactly how many people use credit cards in the UK nowadays? What do they most commonly use them for, and what’s the total amount of UK credit card debt?

Let’s dive into some credit card statistics to see if we can make heads or tails of it all.

Some Quick Facts About Credit Cards in the UK 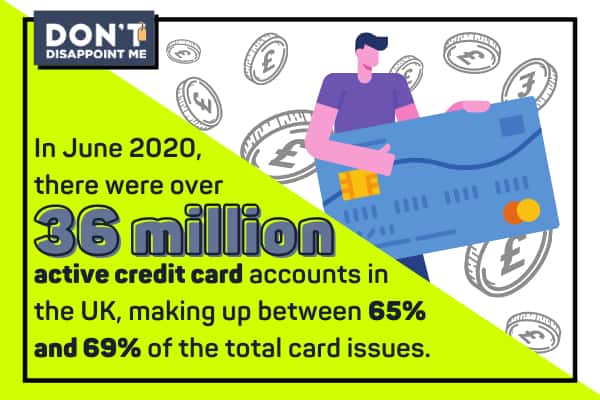 2. The number of active credit card accounts dropped in Q2 2020.

That said, the number of active credit card holders isn’t at all the same as that of total cards in issue in Britain. In June 2020, there were a little over 36 million active credit card accounts in the UK, making up between 65% and 69% of the total. That’s over two million fewer than in February of that year.

Debit cards statistics from the UK show that in 2019, the number of debit cards in use in Britain surpassed 102 million, making them the most popular method of payment in the country. In fact, 98% of the population holds this type of card and uses it to make 42% of all payments.

4. A total of 1.5 billion debit card transactions were made in November 2020.

The number of debit card transactions carried out in November 2020 was 1.6 billion, down 7% from a year prior. This resulted in an overall spend of £53.6 billion, a 3.5% annual increase.

In total, Brits’ spend on credit cards that month was £14.6 billion, a staggering 15.2% less at the annual level. These numbers include credit card activity overseas as well as in the country.

According to their ranking by BrandIndex, a brand perception tracker, the leading credit cards and payment services brands in Great Britain from July 2018 to June 2019 were:

6. Debit card use has overtaken cash in the UK.

Cash vs. card statistics in the UK tell us the latter are winning by a landslide, as the use of cash in the country has been steadily declining over the years. Driven by the convenience of contactless payments, Brits tend to use cards even for the smallest purchases nowadays. This is probably why there was a 15% drop in the use of cash over cards for payment in 2019. 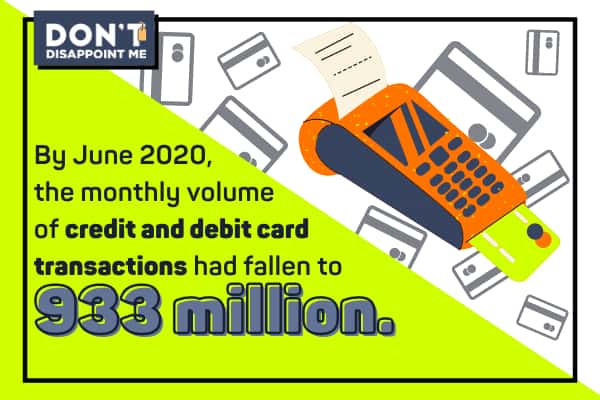 7. The number of daily card transactions is projected to rise to 60 million by 2026.

8. The average transaction spend with a credit card is around £50.

Last year, due to the pandemic, there was a significant fluctuation in credit card spending amongst Britons. In March 2020, the average value per card payment on credit was just under £48.

In addition, credit card statistics in the UK show that card payments soar in the leadup to Christmas and New Year’s Eve, only to tumble in February.

9. The number of card transactions in the UK nearly halved with the onset of the pandemic.

The monthly volume of credit and debit card transactions in the second half of 2019 was consistently over 1.6 billion, but by June 2020, it’d fallen precipitously to 933 million.

The only segment that saw an inverse trend was contactless payment, hitting a peak of 889 million monthly transactions in February 2020.

10. A third of all card purchases were made in supermarkets.

Brits who tend to pay by card spend the bulk of their money on food and drinks. They collectively forked over £114 billion for groceries and dining in 2017.

They also coughed up a pretty penny for financial services—£80 billion in all. Having fun wasn’t too far down on their list of priorities either, accounting for £57 billion in entertainment purchases, or one-fifth of card transactions. 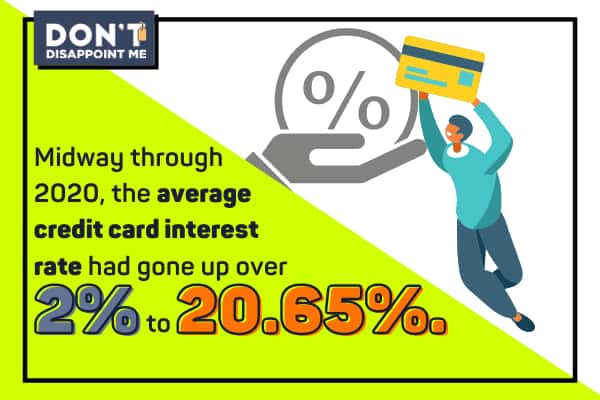 UK residents owed a hefty total of £59.4 billion in credit card debt in November 2020. Per individual household, the average credit card debt amounted to £2,133, while the average total debt, including mortgages, was £60,720, or 108% of average earnings, which means that many families are deep in the hole.

12. Millenials have the most financial debt.

People in the age group between 25 and 34 years account for the largest chunk of UK credit card debt. However, those between the ages of 45 and 54 are more likely to be feeling the pinch, seeing their financial debt as a heavy burden.

13. The average credit card interest rate has gone up.

In part, the reason why banks in the UK have such high-interest rates is that they regularly perform quarterly credit card write-offs of debts they’ve deemed uncollectible.

Write-offs peaked immediately after the Great Recession and in 2010, when banks did away with £2 billion in debt in one quarter. In Q1 2020, i.e. the early days of the pandemic, British banks took £339 million in debt off their books. 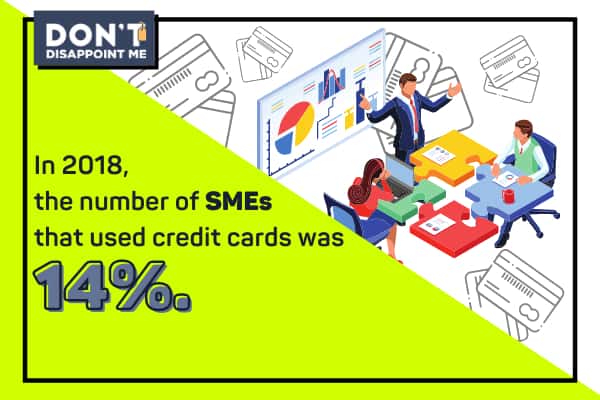 15. There are half a million business credit cards in use in the UK.

16. Just over one-third of SMEs in the UK use credit cards.

In 2019, 34% of respondents to a survey said that they used a credit card as a source of external financing, far outstripping any other source. Perhaps that’s why 14% of SMEs applied for credit cards that same year.

17. Approximately eight out of 10 SMEs get all the credit cards they apply for.

Almost all small and medium enterprises can apply for a business credit card, but how many actually get one? Credit card statistics suggest that it’s pretty straightforward—almost four-fifths of applicants surveyed in 2019 (79%) responded that they’d received all the credit cards they’d applied for. On the other hand, only 9% had been issued some of the cards, the same percentage as those that had gotten none.

18. Credit cards are the second most popular way for businesses to borrow money.

As the facts about credit cards suggest, the use of external finance has declined over the past several years. Namely, in 2012, the number of SMEs that used credit cards was 18%, whereas by 2018 that number had dropped to 14%. Bank overdrafts were only slightly more popular at 19%, while bank loans and commercial mortgages less, reaching just 9%. 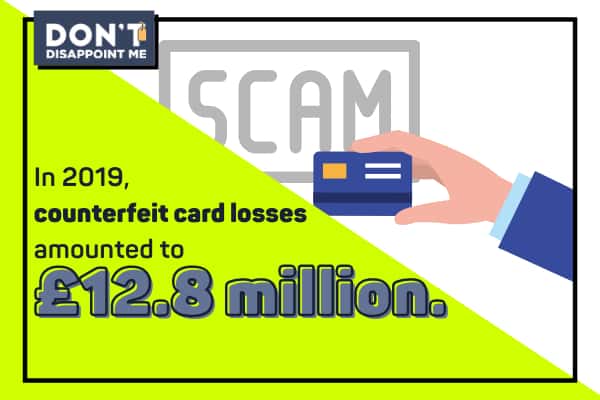 Broken down into categories, card fraud losses in 2019 were organized as follows:

Credit card theft statistics point to a significant decrease in recent years. In 2019, related losses shed 20% to reach £37.7 million. The overall number of cases also shrunk by 15%, now standing at 54,165.

It looks like those with sticky fingers have switched to keyboards—card ID data is now most often stolen online through phishing emails, scam text messages, or physical mail theft.

In 2019, the number of losses as a result of lost or stolen cards decreased to £94.8 million, but the number of incidents went up 6%.

Banks are slow at recognizing a lost or stolen card being used, so they’ve implemented two rules to protect their customers: a daily limit of £30 on contactless transactions, and an occasional request to enter the PIN as proof that the person still possesses the card. 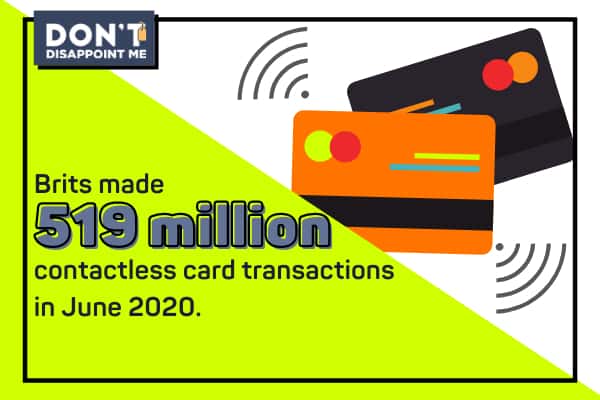 23. In July 2021, there were over a billion contactless transactions in the UK.

British residents made more than 1.2 billion contactless card transactions in July 2021, spending almost £15 billion. This may seem like a lot, but they’d shelled out more than £8.37 billion via contactless payment in February 2020.

24. Cash now accounts for less than a quarter of all UK payments.

The proliferation of digital payment methods is increasingly pushing out cash, as 79% of Britons were using contactless payments as of 2019. As expected, younger people have been driving this trend, being more likely to use Apple Pay, Google Pay or Samsung Pay than older shoppers.

Has your credit card balance been a source of stress for you recently, too? We hope that these credit card statistics have put your mind at ease and shown you just how many people have credit card debt in the UK and are in the same boat as you. Besides, as the pandemic winds down, we’ll hopefully be able to put our money woes behind us and splurge on fun activities again.