20+ Revealing ID Theft Statistics to Keep You Safe in 2021

ID theft is a serious issue in Great Britain. Your name, address, date of birth are valuable assets for criminals who can open credit cards, get state benefits, or even commit crimes in your name.

Anyone with an online presence can be a victim of online ID theft. To help you better understand this issue and how you can protect yourself, we’ve compiled a list of the most important ID theft statistics.

Before we dive in, here are a few of the most fascinating stats: 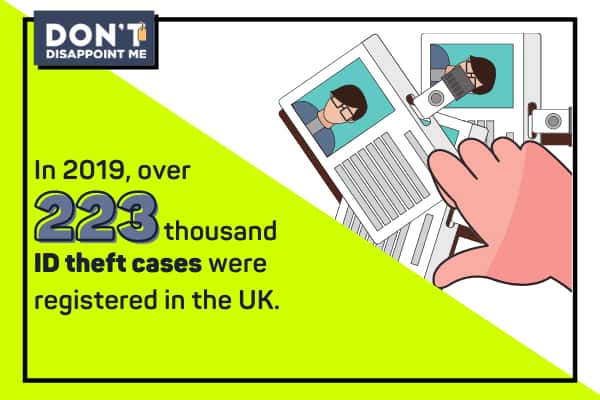 1. How common is identity theft in the UK?

According to Cifas, nearly 500 identities are stolen every day in the UK. ID theft peaked in 2019 when 223,163 cases were registered. This number also represents an increase of 18%— the highest growth recorded in the CIfas database.

Identity theft statistics further indicate that 87% of people have at some point left their info exposed, making them vulnerable to data theft.

This translates to about £3,000 per capita, a report from Cifas estimates. While fraud against individuals reached £9.7 billion, business fraud was estimated at a staggering £144 billion.

3. Almost half of Brits are worried about being a victim of identity theft.

Research shows that 40% of the people in the UK are concerned about being a victim of fraudsters. On the other hand, 5% don’t believe that sharing personal info online is dangerous, and 7% have given personal details to an unknown contact. In addition to that, 23% said they never change their online passwords.

According to Cifas, there was an alarming 20% rise in ID theft cases among all age groups in 2019.

A large portion of the cases involved financial products, which makes people 31+ the most targeted group, as they tend to be more financially stable. However, it was the 61+ age group that saw the largest increase in cases—a sharp 22% rise in 2019.

5. An identity theft sentence in the UK can go up to ten years in prison.

Depending on the nature of the crime, the prison sentence for identity theft in the UK can go up to a maximum of ten years (although max sentences are rare).

Penalties between six months and two years are usually given for less sophisticated crimes. For more organised identity theft operations, the sentences tend to be two to seven years.

Who Is at Risk of Identity Theft in the UK? 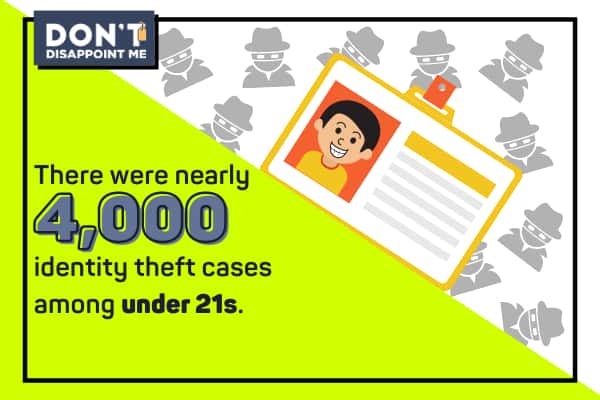 Children and young adults are increasingly the victims of ID theft, with 1.3 million child identity thefts worldwide every year. Fraudsters can use a child’s data to open bank accounts, creating a credit history for the child whose identity is stolen. This activity might go undetected until the child reaches adulthood.

7. Social media sites are increasingly being used as a “hunting ground” for ID thieves.

As social media use increases across the UK, so do chances of falling prey to an identity thief. After all, it’s estimated that over 85% of all ID thefts are carried out online.

Is identity theft from a drivers license in the UK a real risk? Well, it might surprise you to learn that driving licences are an ID thief’s holy grail. Having access to someone’s driving card means at once getting all their personal info (date of birth, address, height, eye colour, and even signature).

According to 2017 data from the DVLA, nearly one million drivers had their license lost or stolen that year.

Brits can’t cancel their lost or stolen driver’s licenses, so even after reissuing an ID, thieves can continue to use them as identification to access the victims’ money.

Different Types of Identity Theft in the UK 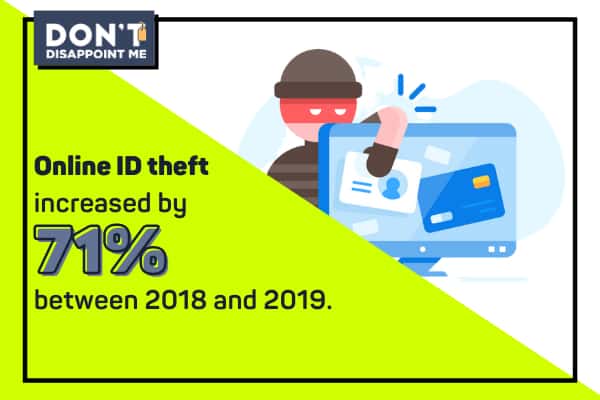 9. Credit or debit card fraud are the most common cases of ID theft in the UK.

The majority of ID theft cases in Britain, or 42%, were related to credit or debit card fraud. Second in line was fraud committed to obtain bank account details, accounting for 22% of all fraud cases in 2019.

Losses from credit card account takeover, when a scammer is using your credit or debit card account, have gone up by 13% in 2019, UK Finance estimates, bringing up the total tally to £20.3 million.

11.  Application fraud amounts to around £30 million per year.

Application fraud, i.e. when someone opens an account in your name using stolen or counterfeit documents, is one of the most common types of credit card ID theft. UK Finance estimates that in 2019, losses from application fraud reduced by 41%, going down to £17.4 million.

12. Identity theft in the UK accounts for 53% of online fraud.

Impersonating another person online to receive goods and services is one of the most common types of online fraudulent behaviour, accounting for 53% of online fraud cases in the UK. What’s more, this online ID theft increased by 71% between 2018 and 2019.

Statistics show 38% of online shopping crimes are the result of stolen identity. And with internet sales making up 34.5% of total retail sales in 2021, there is no shortage of opportunity.

One of the most common types of online shopping fraud is retail account takeover, in which thieves change the victim’s delivery address. This type of ID fraud increased by a staggering 96% in 2019.

14. Telecommunication companies witnessed a 21% increase in the number of fraud cases.

Cases where criminals claim an individual’s mobile phone upgrade to receive expensive handsets that can later sell were on the rise in 2019. This type of account takeover increased by 35%, making up almost half of all fraud incidents in the telecom industry.

15. Phishing scams are responsible for around 35% of all ID thefts.

About 400,000 phishing sites are created each month, with Google being the most frequently spoofed organisation. In addition to Google, PayPal, Amazon and Facebook are also quite popular among scammers, figures and facts about identity theft reveal.

16. Insurance ID theft is on the rise.

Insurance ID fraud has been rising by as much as 15% annually in recent years, scamming statistics report, mostly because of fraudsters pretending to be insurance brokers or by criminals using someone else’s personal info to get lower life or car insurance premiums.

It may seem high, but losses incurred from contactless fraud on cards and devices is low compared to how much consumers spend through contactless methods of payment, i.e. £80.5 billion in 2019. What’s more 44% of all card transactions two years ago were contactless, but this type of fraud only made 3.3% of over credit card fraud losses.

“Money mules” are people who allow their bank account to be used for money laundering. Even though this is a punishable offence that can get scammers over 14 years in prison, the number of “mule accounts” has rapidly increased, especially among under 21s. In 2018 alone, there were 9,636 underage “money mules” discovered in the UK.

Identity Fraud and the Dark Web 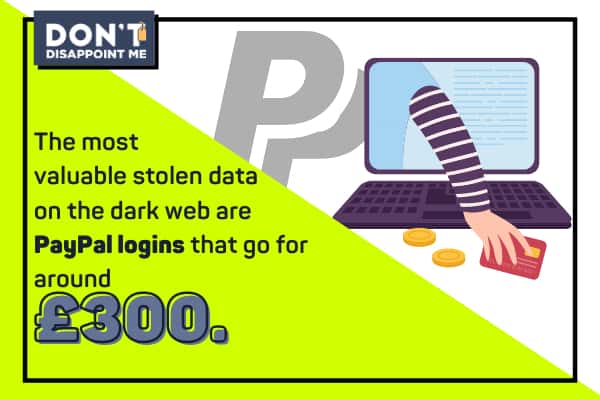 Stolen personal information and page log-ins are sold on the dark web every day. There’s even a price list for this kind of ID fraud. You can buy a new identity for as little as £10.

Some of the most valuable stolen data on the dark web are PayPal logins that go for around £300. Meanwhile, banking account info is worth £161. Last on the list with a value of just £3.74 are Deliveroo logins. 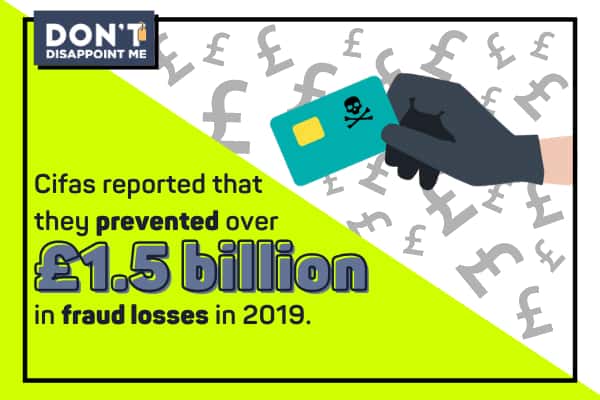 20. How many cases of ID fraud are prevented in the UK?

Cifas reported that they prevented over £1.5 billion in fraud losses in 2019.

With over 500 IDs stolen every day, ID theft statistics show that this issue is becoming a rapidly growing problem in the UK. You can never be sure it won’t happen to you.

But if you’re on the lookout for potential signs of your identity being compromised and take appropriate precautions, such as using some premium VPN services or avoiding public WiFis when banking, you can minimise both the risk and consequences of this crime. Stay alert, and remember—sharing information online is never completely secure.