How Many Small Businesses in the UK Are Defying the Odds?

Small businesses have been the cornerstone of economies around the world since the dawn of commerce. Can we imagine our lives without our local bakeries, neighbourhood pubs, or antique shops around the corner?

But how are small businesses faring at this time of seismic shifts, navigating a pandemic? Or you may be asking yourselves how many small businesses in the UK there are, driving the British economy.

To give you the answers, we’ve put together some noteworthy numbers about SMEs in the UK. 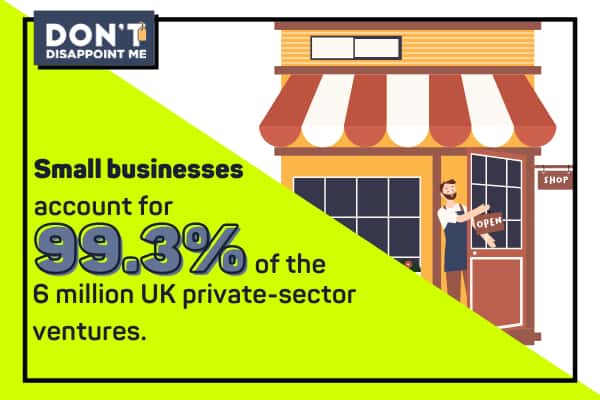 Britain’s private sector consists primarily of non-employing businesses and small companies. Namely, small businesses, i.e. ones with fewer than 50 employees, accounted for 99.3% of the 6 million private-sector ventures established in the UK as of 2020.

By contrast, there were just 7,800 large corporations or 0.1% of all private sector businesses.

2. Nearly a third of small businesses owners are aged between 45 and 54.

3. Younger generations are more interested in setting up their own business.

Research by SME Loans reveals that there’s no shortage of entrepreneurial spirit in Britain. In their survey, close to two-thirds of the workforce reported wanting to start their own company, with Gen Zers leading the pack—four in five members of this age group want to set up their own business. The same was true for just one in three baby boomers, however.

4. Small businesses in the UK have created more than 13 million jobs.

SMEs are the largest employer in the UK, providing an outstanding 16.8 million jobs. Out of these, 13.3 million, or 48%, were in the small business sector. In terms of UK businesses by employee size, large companies take up a smaller share of the total employment—39.3%, or 10.9 million jobs.

For comparison, small and large UK companies employ the most workers or a combined total of 87.3%. But just how many people are employed in the UK?

As of January 2021, around 31 million Britons had jobs, business statistics in the UK indicate. Markedly, UK employment peaked in early 2020, with approximately 31.6 million members of the workforce.

6. Why do Brits want to start small businesses?

When it comes to going into business for yourself, 36% of the workforce reported that they wanted to pursue self-employment because they disliked their current jobs. Moreover, profit, better pay and the option of working from home were significant incentives behind wanting to go it alone.

What do they think stands in their way to success, then?

Unsurprisingly, financial worries are the number one reason why Brits won’t start their own companies. Small business statistics from the UK point to other factors as well: 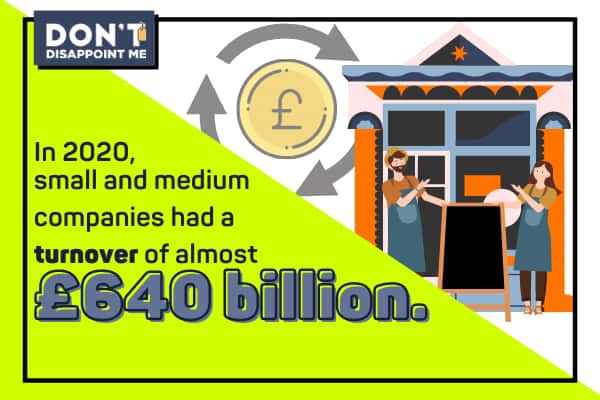 A Q2 2019 survey tells us that 72% of British SMEs reported being profitable, or 80% once those refusing to answer were excluded. 10% broke even over the same period, while only 8% were loss-making. 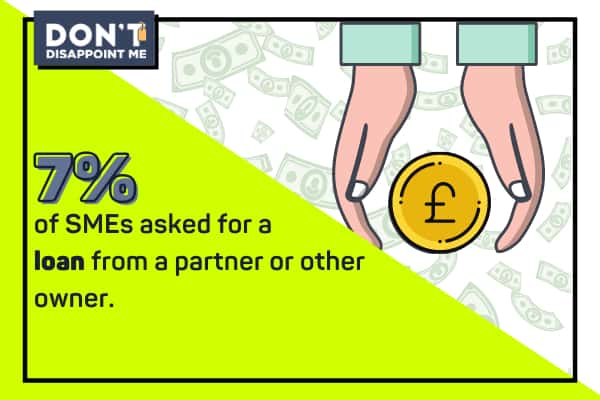 Statistics show that in 2019, over a third of SMEs applied for external finance through a bank overdraft facility. At the same time, 36% of small firms applied for loans from banks or other financial institutions. 14% applied for credit cards, while 7% asked for a loan from a partner or other owner.

10. Crowdfunders are the second most active type of investors.

From backing just eight deals in 2011, crowdfunders have grown into some of the most vital investors in small businesses. On a different note, asset finance deals grew 3% in 2018, while peer-to-peer lending went up 18%, small business statistics report.

Reports show that in 2017, VC deals to all-male teams had a nearly 90% stake, whereas just 10% were invested in mixed-gender companies. Namely, as little as 1% of such funding went to entirely female teams. 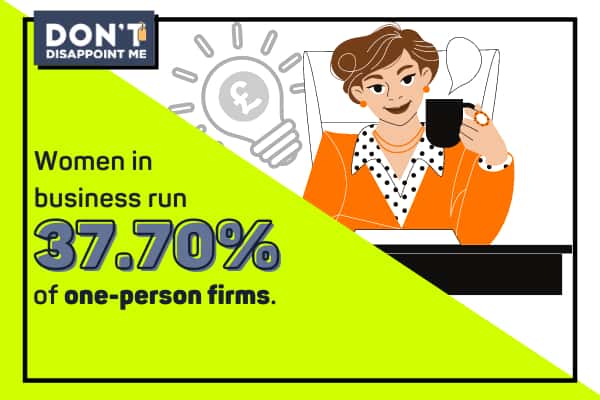 The number of companies in the UK owned by men increased by just 14% during the same period. Despite the significant rise in female entrepreneurship, men still own the majority of small businesses (71% vs 29%).

14. Northern Ireland has the lowest number of women-run businesses.

15. Small businesses led by women have been more affected by the coronavirus crisis.

While many companies are struggling to survive the effects of the Covid-19 pandemic, female-led businesses in the UK seem to have been hit the hardest. According to the latest data, 72% of small enterprises run by women reported a decrease in trading volume, as opposed to just 56% of male-owned companies. 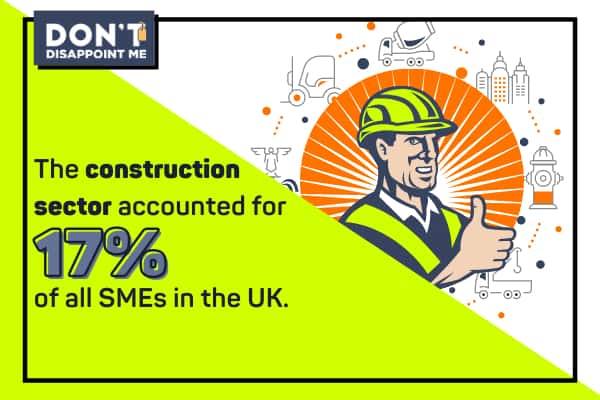 16. The most popular business sector in the UK for SMEs is construction.

Official reports state that 17% (992,000) of SMEs are in the construction industry. Also, there were 872,000 SMEs in professional, scientific and technical activities, as well as 552,000 in the wholesale and retail trade and repair industry. These two sectors accounted for 15% and 9% of all SMEs in the UK, respectively.

17. The number of small firms has grown by 30% over the last twenty years.

Overall, the number of SMEs increased substantially in the given period, going up by 30% and 35% for small and medium enterprises in the UK, respectively. While this is impressive, it was non-employers that grew the most. In the two decades between 2000 and 2020, the number of British non-employing firms rose by a staggering 94%, whereas large companies recorded the lowest growth of just 8%.

18. Among SMEs, the top UK companies by turnover are in wholesale and retail trade.

The wholesale and retail trade sector (including the repair of motor vehicles and motorcycles) generated 35% of SME turnover in early 2020.

Construction made up over 10% of the total, as did the professional, scientific and technical activities sector. Manufacturing and administrative and support services, on the other hand, accounted for less than a tenth of the total SME turnover for the same period.

19. Most SME employees are in the wholesale and retail sector.

Expectedly, then, the largest proportion (14%) of the UK working population employed by small and medium-sized companies in the UK is in the wholesale, retail and repairs sector. The second biggest share is that of the professional, scientific and technical activities sector, making up about 12% of all SME jobs.

20. The most profitable small businesses in the UK are in the real estate sector.

The real estate sector yielded small businesses the highest median profit of £10,000 in the year to June 2019. Hotels and restaurants were also lucrative options for SMEs in the UK, bringing in an average gain of £9,000, the same amount as sectors like agriculture, hunting and forestry, and wholesale and retail trade (including repairs). Manufacturing, in turn, raked in £8,000 for small and medium businesses. 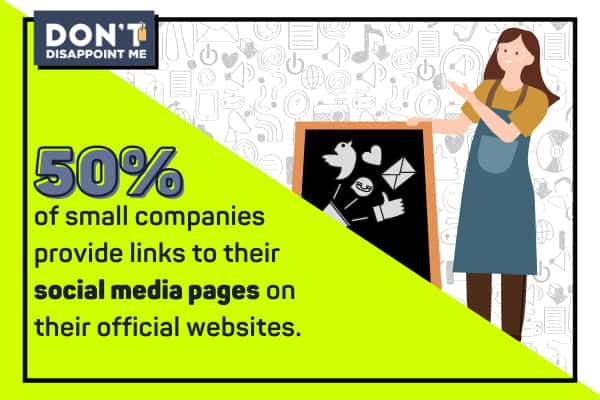 21. 57% of small companies use social media as a digital marketing tool.

Internet marketing statistics impart that more than half of Britain’s small businesses use social media as a tool in their marketing strategy. On top of that, around 50% of companies provide links to their social media pages on their official websites.

The same is true for 10% of the biggest SMEs, i.e. those with 101 to 250 people on staff. Even more surprising, 47% of SMEs don’t have an eCommerce presence, and roughly 23% of them don’t have a website either.

One of the reasons behind this trend, as 14% of small and medium businesses reported, is a lack of related skills and knowledge. 11% cited simply not having gotten round to it, while 3% found the cost of setting up an eCommerce platform prohibitive.

23. 60% of consumers aren’t happy with the mobile experience provided by small companies.

This stat isn’t surprising, since only one in six UK small businesses had a mobile-friendly website in 2019. Despite the fact that this could cost small companies millions in sales as well as lose them customers, particularly among the younger generations, a third of enterprises (33%) believe that their site is fine as it is and doesn’t need to be optimised for mobile use. 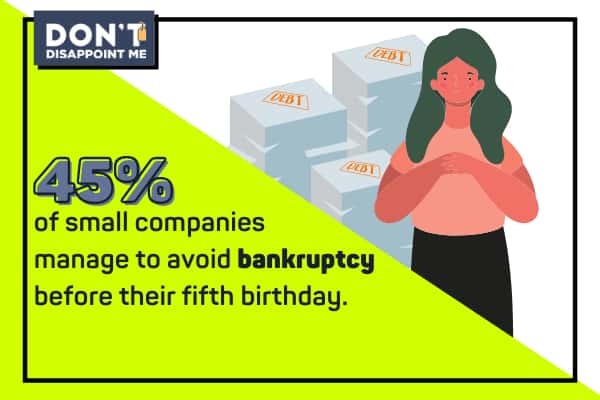 24. How many businesses fail?

A review of the official small business failure statistics stretching across a decade and a half revealed that about half of British SMEs manage to avoid bankruptcy before their fifth birthday, namely 42% of micro, 45% of small and 51% of medium-sized businesses.

25. Financial hurdles were the biggest challenge for small businesses in 2020.

63% of these companies’ owners are self-taught about taxes and invoicing, making finance their biggest challenge at 36% of respondents to a survey. 21% cited technology struggles, 13% referenced changes in society, 12% said that their biggest concern was finding the right employees, whereas 5% were worried about supply and logistics. 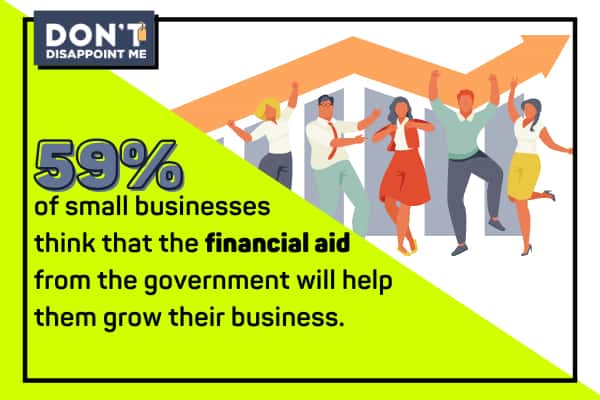 Recent reports indicate that 23% of companies laid people off in the final quarter of 2020, whereas one in seven believed they’d be forced to cut staff in Q1 2021 as well.

Furthermore, the number of small businesses in the UK dealing with reduced profits is at an all-time high. At the start of this year, 58% of small firms expected lower profitability. Even worse, the sector’s confidence index is down 27 points and currently stands at -49.3.

Q3 2020 data reveal that the number of British SMEs that saw their revenue drop increased fourfold compared to the year before the pandemic. Additionally, half of British SMEs planned to or had already applied for the government’s job furlough scheme.

28. 98% of small companies that have received government aid report that it’s affected them positively.

What’s more, as many as 80% think that the support they get from the government is enough to ensure the survival of their business, and 59% believe that the financial aid will help them grow their business in the future. 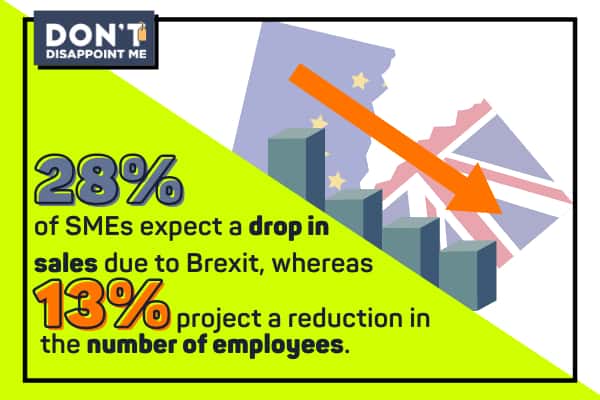 29. 56% of SMEs don’t think Brexit will affect their growth.

They may be in the minority, but the forecasts of those who believe leaving the EU will impact their business are primarily negative. 29% think they’ll grow less due to Brexit, whilst 28% expect a drop in sales. Most of the companies surveyed also projected a price hike (58%), a reduction in the number of employees (13%), and a decrease in investments (12%) and exports (9%).

Almost three-quarters of small companies in the UK want the government to place a greater emphasis on digitalization. Other key areas the administration should focus on include the development of skilled staff, regional economic growth, and promotion of the green economy.

These stats tell us that SMEs may currently be down, but they aren’t out. As we’ve seen throughout history, not even a major economic crisis or world-altering pandemic can snuff them out. Nevertheless, it remains to be seen how many small businesses in the UK will stand the test of time and bounce back from these uncertain times.