26 Car Insurance Statistics in the UK That Have You Covered

Having a car in the 21st century is a necessity. And if you’re a car owner, you already know that buying insurance is mandatory.

Did you know that out of the 26 million households in the UK, almost 20 million have car insurance?

We curated some captivating car insurance statistics for the UK to give you insight into the car insurance market. Let’s dive in!

Ten Fascinating Facts and Car Insurance Statistics for the UK 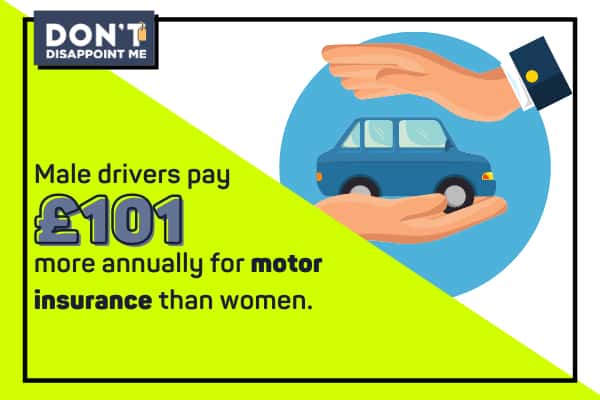 1. Around 75% of UK households have motor insurance.

31.5 million cars were on the roads of the United Kingdom in 2018, or about one vehicle registered per two people and the majority of them (75%) had car insurance. The same year, out of 26.5 million households in the UK, approximately 20 million had automobile insurance.

The cost of comprehensive insurance declined by 14% compared to Q1 2020. In fact, the current price of an annual premium is the lowest recorded in the last seven years. This drop in the cost of auto insurance is the result of the decline in vehicle usage and accident claims, which have stayed under normal levels during the 2021 lockdown.

It’s not just the cost of comprehensive insurance that has gone down. As of May 2022, British citizens paid £935.88 for third-party, fire and theft motor insurance and £1,409.97 for third-party insurance only.

Third-party only and third-party, fire and theft premiums tend to have higher average cost as both plans are more common among young drivers who are considered riskier.

The most important factor that determines your car insurance premium is location. Living in a big city or busy town means more cars on the roads resulting in more accidents and more insurance claims.

East London drivers currently pay the most expensive premiums—approximately £870. Drivers across London have an average car insurance premium of £608, while motorists in Kirkwall in Scotland pay £256 on average—the lowest in the country.

Another critical factor affecting insurance premiums is the driver’s age. The latest data on average car insurance cost by age in the UK show that motorists under 25 pay twice as much as those aged 50 and over. In fact, drivers between the ages of 20 and 24 pay the highest annual premium of £871, while those under 65 have the lowest average premiums.

During the lockdown, the average cost of car insurance drastically dropped for drivers from the 17-19 age group as driving tests were cancelled and the number of new young drivers was reduced as a result. More specifically, annual car insurance premiums for this age bracket now costs £505, a decline of 37% in the last year alone.

Male drivers typically pay £101 more annually for motor insurance than women, i.e. £812 for comprehensive car insurance as opposed to the £711 paid by female drivers. Although insurers are banned from considering gender when it comes to estimating coverage, it’s believed that men drive more and have more advanced cars, which could increase the possibility of accidents and high repair bills.

Based on recent research on automobile insurance by MoneySuperMarket, a comprehensive policy premium for a Triumph car was £108, making it the cheapest car brand made to insure. Lotus cars were on the opposite end of the spectrum with an average premium of £406.

7. A rise in insurance premium tax rates is one of the major factors affecting car insurance costs.

A rise in the Insurance Premium Tax (IPT) can result in a car insurance premium increase. In 2017, the standard rate increased to 12%, whilst the higher rate, which includes vehicle, appliance and travel insurance, went up to 20%. 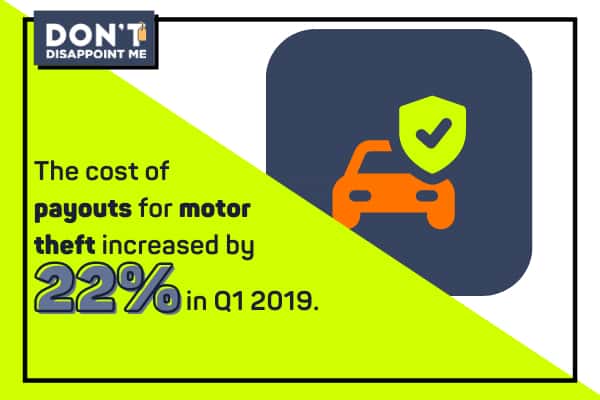 As lockdown measures kept drivers at home, the rate of car accidents and the number of car insurance claims settled reduced. Thus, in 2020, there were 2.1 million car insurance claims, which represents a 19% decrease compared to the year before. The number of claims settled also declined in Q4 2020 to 468,000, down by 13% from the previous quarter.

Estimated at £8.3 billion, total payouts for claims settled dropped by 6% from 2019 thanks to lockdown measures, which in turn led to a 14% decline in road traffic in the first six months of the year. Payouts may have declined overall; however, the average value per claim settled rose by 17% to £4,000 in 2020, reflecting an increase in personal injuries and vehicle repair costs.

A Statista survey suggests that over £29 million were paid out per day in 2018 in domestic motor vehicle claims, compared to just £19.7 million in 2014. As for the commercial sector, the amount paid per day in claims for business motor insurance stood at £7 million.

11. The average value for bodily injury claims from motor vehicle accidents was £10.45 thousand.

1,784 people were killed in traffic accidents on British roads in 2018, and 25,511 were seriously injured. With this in mind, it’s not surprising that the value of bodily injury claims related to car accidents stood at more than £10,000 in the 2017/2018 financial year.

On the other hand, the average value of car claims in the UK for damage to private vehicles caused by motor accidents was much lower — around £3.082.

12. A motor theft claim was settled by insurers every eight minutes in Q1 2019.

13. Fraudulent motor claims worth £3.3 million are detected every day.

Data on car insurance accident statistics from ABI found that in 2019, 107,000 fraudulent insurance claims were made in the UK, worth £1.2 billion. That means every five minutes, a new scam was detected, adding up to 300 scams per day. 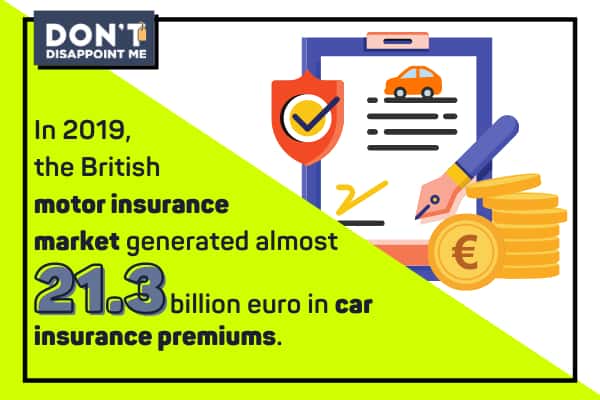 14. The UK’s car insurance market is the third-largest in Europe.

A report by Research and Markets indicates that in 2019, the car insurance market in the UK generated gross written motor insurance premiums (GWPs) of over £14.2 billion—a 2% increase from 2018.

16. Net premium income of the domestic motor insurance market stood at more than £7.5 billion in 2018.

After fluctuating over the years, net income for domestic motor vehicles through premiums amounted to over £7.5 billion in 2018. On the other hand, net premium income for the commercial motor insurance industry in the UK stood at £10.1 billion.

17. The value of domestic motor insurance commission and expenses was almost £1.9 billion in 2018.

2013 was the year with the highest domestic car insurance market value in the UK—over £2 billion.

In 2018, the value of the commercial motor insurance commission and expenses market was a little over £800 million—the highest value on record since 2007.

Between 2016 and 2018, the operating profit margin of motor insurers in the UK went from 7% to 16%. After years of underwriting losses (the most significant of which was recorded at almost £1.8 billion in 2010), the industry managed to finish 2017 and 2018 with a net annual underwriting profit of £258 million and £515 million, respectively.

19. Direct Line and Admiral are the leading car insurance companies in the UK.

The motor insurance market in the UK is fragmented, and some of the major players in this industry include Aviva, Admiral, Direct Line, Zurich Assurance, and The Prudential Assurance Company. A report from Statista reveals that in 2018, Direct Line and Admiral were the major players on the market with approximately 3.2 and 3.5 million plan owners, accordingly.

There were over 94 thousand employees that were directly employed in the UK’s insurance sector (including motor insurance) in 2018 alone. And in 2019, the tax contributions of the industry reached £75.5 billion, making this sector the largest tax contributor in the country. 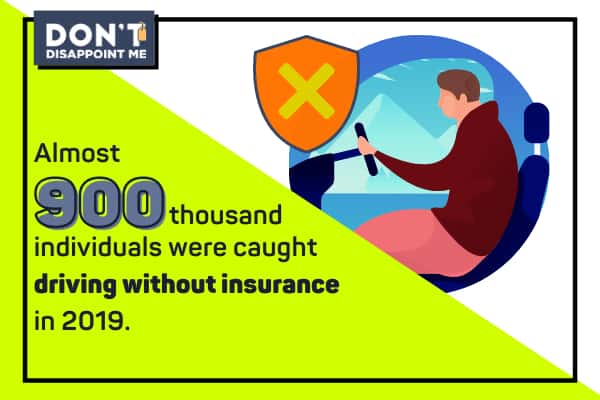 21. How many uninsured drivers are there in the UK?

According to a recent motoring crime report, almost 900,000 individuals were caught driving without insurance in 2019, which is the equivalent of 1.59 offences for every 1,000 people.

At the top of the list was West Yorkshire, with nearly 5,991 uninsured drivers, the highest number of offenders per capita, or 2.58 cases for every 1,000 people. Sussex is at the other end of the spectrum, with an offender rate of 0.71.

The report also shows that 74.2% of uninsured drivers were under 40 years old, while uninsured male drivers were accountable for more than eight in 10 motoring offences.

22. 130 people are killed in collisions caused by uninsured drivers.

More than 130 people die every year, and 26,000 are injured in accidents caused by drivers without insurance. This translates to about one in every five road traffic accidents. What’s more, uninsured drivers are more likely to commit “hit and run” accidents, be involved in the use of a stolen vehicle, or driving under the influence of alcohol and drugs.

23. The fixed penalty for uninsured drivers is £300 and six points off the licence.

Driving a car without insurance is a criminal offence. According to auto insurance facts, if the case goes to court, the offender can get a driving ban and an unlimited fine. If the case does not reach the court, uninsured drivers are usually fined £300, and six penalty points are taken off their licence.

Along with the fine, uninsured drivers could have their vehicles seized or crushed. In 2019, for instance, 137,410 vehicles without insurance were seized, or the equivalent of one seizure per four minutes.

Technology Trends in the Insurance Industry 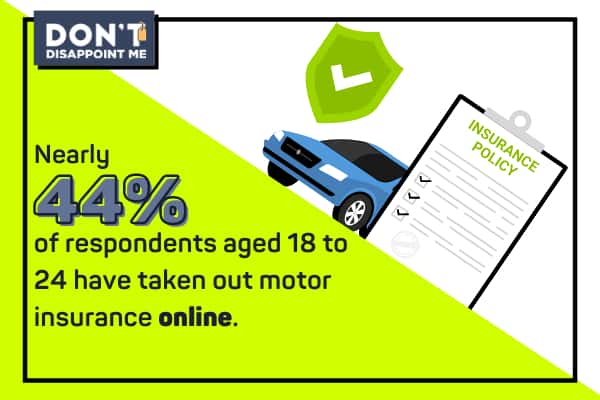 24. Purchasing car insurance online is a growing trend among the younger age groups.

An online survey of over 3,000 Brits suggests that 60% of consumers have taken out automobile insurance online.

At 43.82%, respondents aged 18 to 24 had the lowest rate, probably because people of this age group are the least likely to own a motor vehicle. On the other hand, 62.4% of over 65 year-olds bought car insurance online, which is not surprising given the rising trend of internet usage among older generations in the UK.

25. Black box insurance is mainly offered to drivers 25 and younger.

A survey from February 2020 reveals that black box motor car insurance is mainly offered to drivers 25 and younger, as they are less experienced and more likely to cause accidents. Car insurance premiums with telematics cover can range from £1,774 for 17 to 19 year-olds to £300 for 65 and over.

26. The consumer adoption rate of fintech companies in the UK is 71%.

Between 2015 and 2019, the consumer adoption rate of fintech products in the UK increased rapidly, going up from 14 to 71% in just four years. One of the reasons behind this growth is the increasing number of banks and financial services companies offering fintech products worldwide.

As long as there are cars on our roads, there will be a need for motor insurance. The market is on the rise, and new technology trends like insurtech companies, AI and chatbots are bound to make a strong impact on the industry.

We hope our collection of car insurance statistics for the UK left you better informed about the market’s current condition and its future development.