20+ Artificial Intelligence Statistics that Bring You Closer to the Future

From healthcare to finance, AI is slowly but surely getting incorporated into every field of our lives.

But have you ever wondered where the UK stands when it comes to AI or how it has changed the UK healthcare system?

If you are interested in finding out more about artificial intelligence in the UK, we’ve prepared a collection of fascinating AI stats for you. So, let’s jump right in.

Top Ten Fascinating Facts About AI in the UK 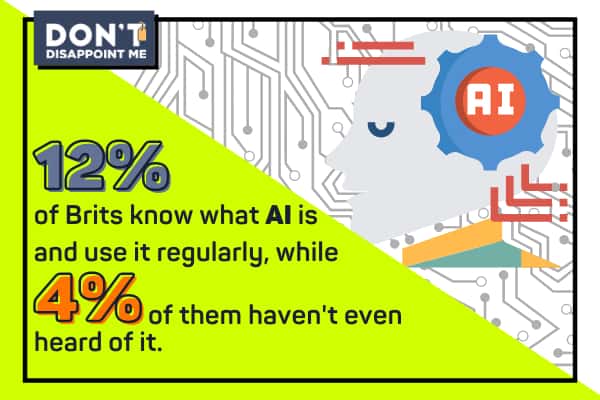 According to a KPMG survey, nearly half of Brits don’t use artificial intelligence but know what it is. 12% of them know what AI is and use it regularly, while 4% have never even heard of AI.

Interestingly, 81% of the ‘aware’ users think that AI is all about robots, whereas 6% associate it with Google search.

AI facts and figures for 2020 show that the UK’s artificial intelligence readiness is in second place globally, behind the US. The UK’s AI adaptability is close to 68%.

Finland and Germany hold third and fourth place, respectively, and are not that far behind the UK.

At the same time, a small part of the companies (12%) has a net worth of more than £1 million.

4. Less than half of the AI companies have 2–9 employees.

The latest information about artificial intelligence entrepreneurship shows that one-fifth of the UK’s AI companies consist of a single person. In contrast, around 3% of companies employ more than 250 people.

For the most part, AI businesses settle in big cities. In 2020, more than 1,500 companies were situated in London. London has also been named the AI European capital.

Cities like Reading, Cambridge, and Manchester had 193, 110, and 96 AI companies, respectively.

6. Who manages AI companies in the UK?

Recent reports indicate that nearly half of the 29 leading AI companies have at least one woman as a co-founder. One-tenth of AI workers are women. What’s more, 24% of these companies have a female CEO, and British women co-author around 27% of published AI research papers. 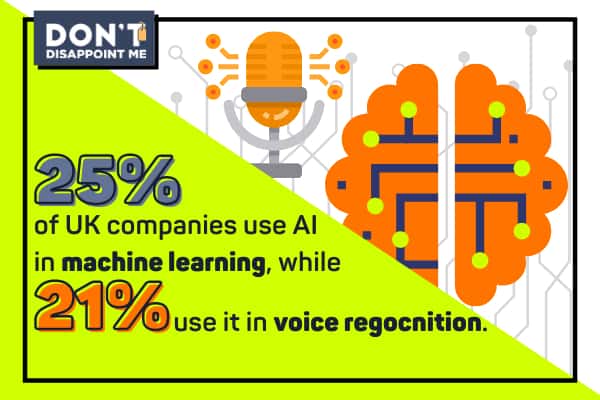 7. What is AI used for today in Great Britain?

The UK leads with AI in the healthcare sector. In 2019, a study of 29 companies revealed that 17% of them are involved in healthtech. AI companies are also serving sectors like mobility (14%), marketing and advertising (10%), and retail (6%).

8. Startup companies account for 89% of the UK’s AI ecosystem.

The UK’s AI ecosystem primarily consists of startup companies with 50 or fewer employees. By contrast, more than half of companies have over 50 workers in the Chinese AI ecosystem.

According to a recent study, nearly half of the leading healthcare companies are using AI in their work process.

One worrying finding is that 96% of the healthcare workers said that they weren’t consulted before the implementation of AI by their employer, while 69% still haven’t finished their AI training.

According to a survey by Microsoft, more than a third of companies are open to new AI technologies. AI in business is primarily used for analytics and big data technologies (38%). A significant part of companies also uses AI in machine learning (25%), voice recognition (21%), and research (12%).

11. 14% of British retailers use AI technologies.

Retail and e-commerce statistics indicate that in 2019, 83% of retailers used AI technologies in e-commerce. AI has also been implemented in warehouse stock management (57%) and warehousing robotics (47%).

12. The time spent categorizing samples in AstraZeneca was reduced by 50% using AI.

Research shows that by using AI, AstraZeneca managed to decrease the time spent organizing and labelling samples by half. Furthermore, the company is developing AI systems aimed at cutting back pathology analysis time by 30%.

According to the UK Biotech Database, the leading sector of the biotech industry is professional services and consulting with over 800 companies or around 20% of total companies in the industry. Next on the list are supplier and engineering (16.5%), biotechnology R&D services (16.2%), and public or non-profit organizations (11.9%). 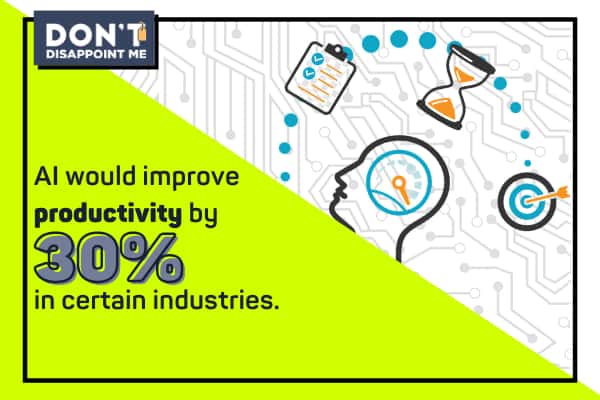 14. AI could add an estimated value of £630 billion to the UK economy.

Artificial intelligence growth statistics reveal that using AI technologies would benefit the UK economy by adding more than £600 billion in value by 2035. What’s more, AI would make savings of up to 25% and improve productivity by 30% in certain industries.

16. One of the major issues with AI in the UK is the availability of data.

Artificial intelligence statistics in 2021 indicate that the main challenge that the AI industry needs to tackle is access to data. What’s more, AI in healthcare needs to focus more on patients’ data privacy. Other issues for the sector are a skills shortage and the high cost of AI technology.

AI and Voice Assistants in the UK 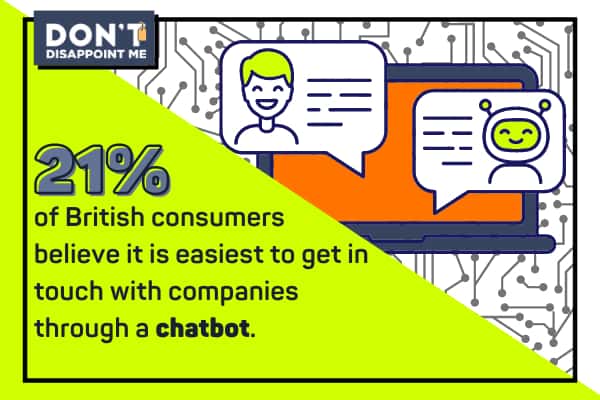 18. 77% of retailers use chatbots for customer service.

Chatbots can help companies with the messages they get from clients—21% of the customers believe it’s easiest to get in touch with companies through a chatbot.

What’s more, over 20% of the surveyed Brits would consider buying something from the company through a chatbot and would be willing to spend an average of £315.

About 6.6 million Brits own a virtual assistant device, and nearly 5 million of them use it daily. 8% of UK households own at least one Amazon Echo, while 2% own a Google Home assistant.

20. 84% of Brits use virtual assistants for listening to music.

A recent report suggests that most Brits use their AI-powered voice assistants to listen to music. Another survey reveals these assistants are used as an egg timer by 24% of respondents and for news and weather reports by 61%. 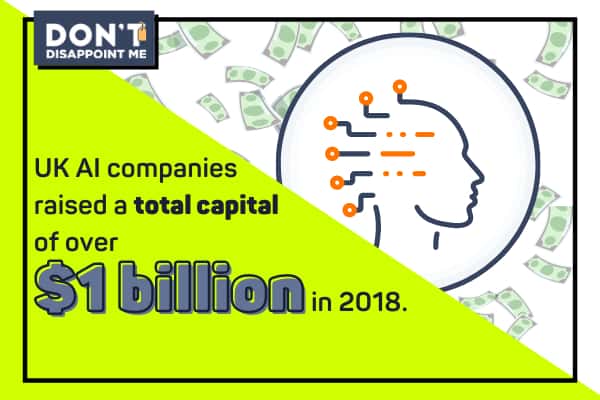 According to a recent report, UK AI companies raised a total capital of around $1.3 billion in 2018. In comparison, AI companies in France and Germany raised $400 million and $300 million, respectively.

The British AI market is expected to increase at a cumulative annual growth rate of 35.9% in the next six years. The growing number of AI start-ups and the adoption of AI in healthcare, finance, and business services are crucial for the growth of AI in the UK.

23. Leading AI companies in the UK raised a total funding of £57.8 million.

Figures on start-up funding reveal that 29 of the most successful companies in the UK raised a total of over £57 million in 2019. LocalGlobe, Entrepreneur First, IQ Capital, Pentech, and SpeedInvest were the top companies that invested in these startups.

The UK’s AI strategy is expected to raise the R&D credit tax rate to 12%. In addition, the government plans to invest £406 million more to address the shortage of STEM skills and boost GDP growth.

With the launch of the AI Sector Deal, the UK government made an investment of roughly £1 billion in AI, AI investment statistics reveal. £300 million of that came from public funding and £700 million from academic and industrial associations.

The Impacts of AI 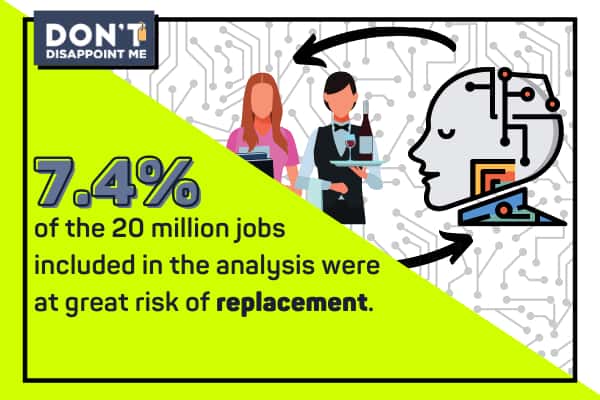 26. What percentage of careers are affected by artificial intelligence?

The latest information on AI’s impact on jobs from the Office for National Statistics tells us that:

The average pay per year for senior leadership roles is around £84,000, whereas student internships’ pay was approximately £25,000. AI jobs pay was 1.6 times higher than the UK’s average salary of £28,450.

28. Around half of NHS trusts are investing in AI.

Brits seem to be aware of the potential artificial intelligence benefits to society. 53% think that AI technology would have a positive influence on the NHS, while 10% of them take the opposite stance. Interestingly, more than half of Brits would trust AI with their personal data.

AI adoption is definitely on an upward trajectory in more than a few sectors and industries. What’s more, reports and analyses point to accelerating future growth.

We hope our carefully curated list of AI stats gave you the insights you were looking for about this groundbreaking technology.