Lewis Hamilton makes getting behind the wheel seem easy, but unfortunately, most of us don’t have the skills of a Formula 1 champion.

Did you know that over 150,000 people are injured or worse in car accidents every year in the UK? Scary, right?

To raise awareness, we compiled a list of some of the most shocking car accident stats in the UK.

Keep reading to find out more! 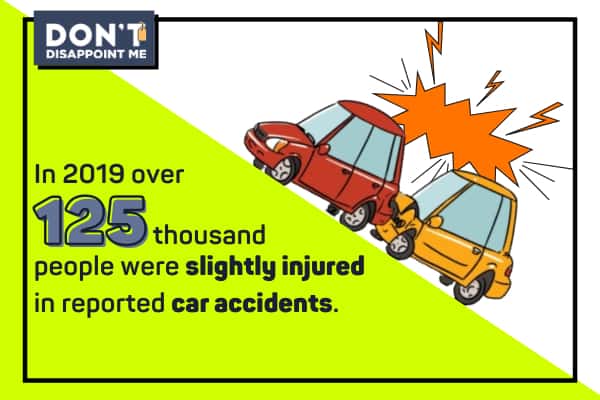 1. In 2019, there were almost 26,000 seriously injured casualties in reported car crash accidents in the UK.

2. How many car accident casualties are there per year in the UK?

3. Where do most collisions happen?

Over half of the casualties in the UK for 2019 occurred on built-up urban roads. More specifically, road safety statistics reveal that 63% of injuries took place on such roads. On the other hand, the majority of fatalities (57%) occurred on rural roads.

4. 39% of road accidents are caused by drivers failing to look properly.

Many factors can lead to car accidents today. But in 2019, almost 4 out of 10 in the UK happened because the driver failed to look properly. Other common causes were the driver not judging the other person’s path or speed (21%), reckless or careless driving (17%) and sudden braking (5%).

5. The average prevention costs of fatal traffic collisions reached £2.2 million per accident in 2019.

The average prevention cost for slight accidents in the same year was considerably lower at £26,840 per accident—still a significant amount.

According to the latest stats and facts, there were over 14,900 car accidents with people travelling to work in 2019. What’s more, 2,213 accidents involved cars taking students to school.

A study for 2017 revealed that 96.5% of all drivers were observed using seatbelts on weekdays in the UK. That percentage was a bit higher during weekends—97.2%. Besides drivers, 93.1% of front-seat passengers and 90.7% of rear-seat passengers used seatbelts.

9. Latest available data shows that 96.5% of drivers used their seatbelts on minor and major roads.

The survey for 2017 also revealed that 96.6% of drivers used their safety seatbelts on rural roads, while 96.4% used them on urban roads.

Car Accidents and Mobile Phones in the UK 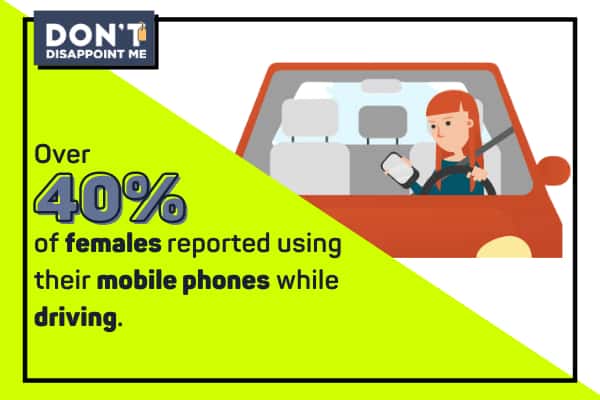 11. There were 420 car crash accidents because of the use of mobile phones by drivers.

12. In 2019, drivers using mobile phones were the main factor for 16 motorcycle accidents.

If we take a closer look at the car accident stats in the UK by vehicle type, we can see that 330 of the drivers that caused an accident because they used their phones were in a car. What’s more, 42 of the casualties involved a bus, and pedal cycle drivers caused 17 accidents.

What’s even more alarming is that this is an increase of 4.8% from 2018. The good thing is only 6.4% of these drivers said they used their hand to hold the phone while driving, while 40.5% stated they used Bluetooth or Voice Command.

Compared to the year before, in 2019, mobile phone usage while driving increased by 5.8% among people aged 25 to 29. In comparison, only 36.3% of people aged 50 and overused their phones while driving. This behaviour seems to be more prevalent among men—49.7% of males reported doing it, compared to 43.8% of females.

15. 1.3% of car drivers handheld their phones while driving during the weekend.

16. 16% of UK drivers text, post on social media, or send emails while in traffic.

As many as 16% of drivers in Britain admitted to sending mobile messages, posting on social media, or exchanging emails while driving. Another 14% even stated that they took photos with their phone while operating their vehicle. No wonder mobile phones are responsible for so many accidents on UK roads. 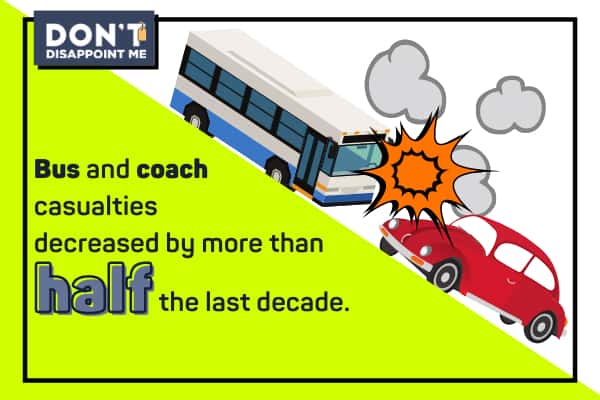 Have you ever wondered how many people die in car accidents every day? In 2019, there were 1,752 road fatalities, which amounts to an average of 4.8 people killed per day in reported road accidents.

If we look at the car deaths per year in the UK, we can see that in 2019, there were 736 fatalities by car occupants. Furthermore, 100 pedal cyclists, 470 pedestrian deaths, and 336 motorbike deaths in the UK.

The number of fatalities in young people aged between 17 to 24 was 248—a decrease of 11% from the previous year. There were 99 young fatalities among car drivers, one young pedal cyclist fatality, and 47 young pedestrian deaths in the UK.

The increase of 9% amounts to a total of 638 fatalities among older people, 203 of which were car drivers and 98 were car passengers.

According to motorway accident statistics, there were 6,603 motorway casualties—a decrease of 10% from 2018. Out of these, 105 had a fatal outcome.

23. In 2018, Harborough had the highest rate of young car driver casualties.

Aggressive driving and excessive speeding can often lead to car accidents with multiple casualties. Harborough has the highest rate of young car driver casualties with 4.16%, followed by the Shetland Islands with 3.93%. In contrast, Cambridge and Oxford had the lowest rate for young car victims—0.49% and 0.50%, respectively.

24. There were 14 bus and coach fatalities, stats from two years ago reveal.

Interestingly, bus and coach casualties decreased by more than half in the last decade, and in 2019 alone, they fell by 19% from the year before. It’s worth noting that older people accounted for 36% of the total bus and coach passenger casualties in 2019.

26. The highest number of child casualties occur during the summer.

This is likely due to the fact that days are longer in the summertime, and more children play outside. July is the month with the highest number of child casualties, while December had the lowest number. 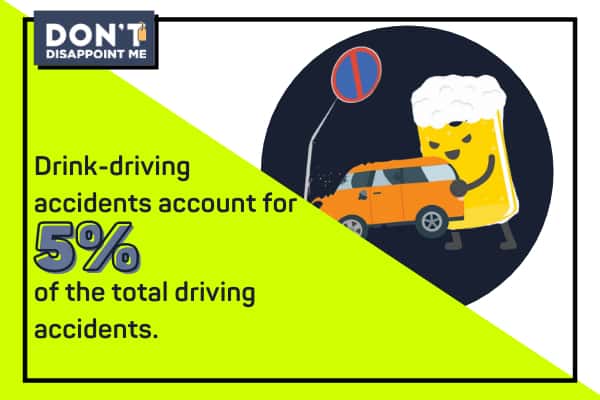 27. Drink-drive accidents accounted for 13% of total fatalities in reported road accidents in 2018.

In 2018, the number of deaths in which at least one driver was above the alcohol limit was somewhere between 240 and 270, representing 13% of total road accident deaths.

The total number of people in the UK that were killed or had severe injuries in accidents that involved at least one driver over the alcohol limit was 8,700 in 2018—a 1% increase from the year before. It’s also estimated that drink-driving accident casualties accounted for about 5% of total casualties in 2018.

The total number of drink-driving accidents in 2018 was 5,900, which is 5% of the total accidents in that year.

30. In 2018, East Midlands was the region with the highest rate of drink-driving accidents.

East Midlands had a drink-driving accident rate of 7.7%, which was the highest of any region in the UK. Right behind were North East with 6.5%, South East with 6.1%, and the South West with 5.9%. London had the lowest rate—3.6%.

31. Wales had the highest rate of drink-driving accidents in the UK.

According to car accident statistics in the UK, Wales had the highest rate of drink-driving accidents among the countries of the UK. Specifically, Wales had a rate of 6.6%, followed by England with 5.4% and Scotland with 4.8%.

32. Males were involved in 80% of the drink-driving accidents.

Only 20% of drunk driving accidents involved female drivers with over the limit alcohol in their blood. But when it comes to drink-driving accident casualties, females accounted for 34%, while males for 66%.

Despite the gloom of these numbers, car accidents have been decreasing slowly but surely in the last couple of years, and we hope that trend continues in the future.

Nevertheless, we should all take these car accident stats for the UK as a warning and be extra careful when we get behind the wheel.

I am a writer and editor, turned co-founder. During my writing days, I came across countless accounts of people trying to find trusted and reliable sources online. That’s when I realised that this was easier said than done. Creating Don’t Disappoint Me allowed me to help other writers out there who struggle just like me, get the most reliable data in no time. Although this website keeps me busy, I am also known to binge-watch a TV show or two or hit the gym, which doesn’t happen that often.