Did you know that while you are reading this, there are over 46 million other people online? And that most of them are on mobile? Impressive, huh?

Want to learn more about mobile internet usage statistics for yourself or your business? Interested to know how many people in the UK rely on mobile internet to do their shopping or check messages?

Keep on reading to find out the answers to these questions and more. 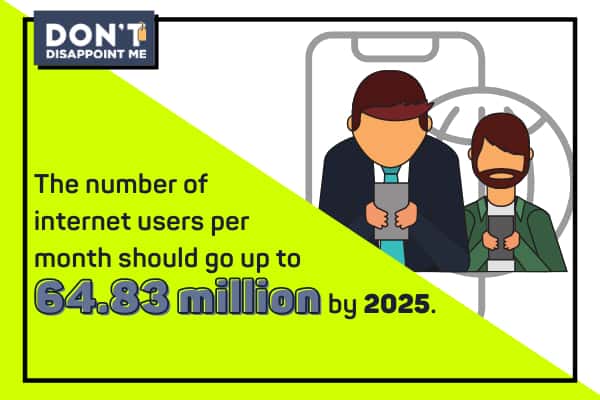 Britain is one of the most connected countries in the world. Broken down by numbers, UK internet usage statistics show that:

Last year, the number of monthly active mobile internet users was estimated at 90.3% of the total population. The share of Brits who use mobile internet is expected to grow, increasing to 93.59% of the entire UK population in 2025.

3. In 2019, 35% of internet users in the UK accessed the internet through a mobile device.

4. Brits spend an average of 2 hours and 7 minutes using the net on mobile devices.

People in the UK spent an average of 5 hours and 28 minutes online from any device. The majority of this time, or a little over 2 hours, is spent on mobile devices.

A 2020 Statista survey reveals that 91% of respondents had 4G on their phones as opposed to 5% who did not have 4G mobile broadband connection. Research from Ofcom on UK internet usage, on the other hand, indicates that 80% of households and businesses in Britain have indoor 4G connection.

6. Mobile devices are connected to WI-FI 65% of the time.

A comparison between WI-FI and mobile connections reveals the former to be by far more popular before and during lockdown when 74% were connected to WI-FI rather than a mobile network. WI-FI connections were also more common in urban areas than rural (66% as opposed to 64%, respectively).

7. The average download speed of mobile internet connections in the UK is 35.57 Mbps.

According to StatCounter, in October 2020 alone, Google had 98% of the search market share far ahead of Yahoo with a 0.7% stake.

In terms of mobile browser usage, Safari took the lead, holding a share of 47.66%. Chrome was ranked second with a market stake of 41.15%.

Ofcom’s official report shows that an average of 2.9GB was used on each mobile data connection every month. Compared to fixed broadband connections, mobile data usage was much lower. Namely, fixed connections used 240GB a month. 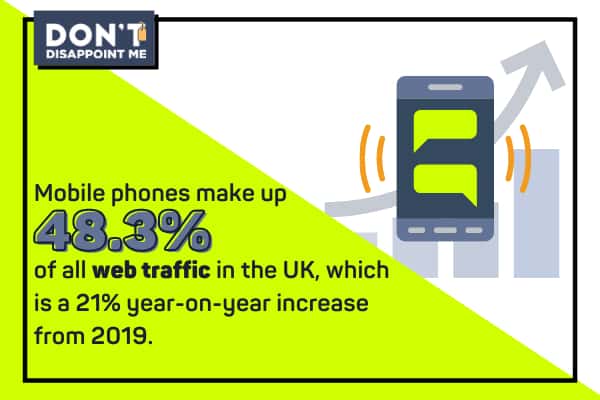 The category of internet-connected devices includes laptops, PCs, tablet computers, and smartphones. According to a 2020 survey, there was a slight decrease in ownership of these kinds of devices. Specifically, 81% of UK adults owned at least one device from which they can access the internet, compared to 82% in 2019 and 83% in 2018.

12. How much web traffic is mobile?

Not only is mobile traffic on the rise, but the share of other devices declined. In 2019, computers and laptops took up a 44.1% share of total web traffic (a decline of almost 10% compared to 2018) and tablets accounted for 7.3% of internet traffic, down by 32% from the previous year.

13. Smartphones are the most used devices to access the internet.

2018 smartphone usage statistics tell us that 78% of UK citizens accessed the internet through their smartphones or mobile phones. These devices were prefered by almost all age groups, with the exception of those aged 65 years and older. From this generation, 42% used a tablet to connect to the net as opposed to 36% who used a mobile device.

The majority of internet users in the UK (60%) still use both phones and computers to access the internet, although this percentage has gone down by 3% between 2017 and 2019. On the other hand, mobile device usage statistics indicate that the number of internet users accessing the net solely through phones and tablets has gone up from 25% to 35% during the same period.

15. The popularity of using computers to access the net is going down in the UK. 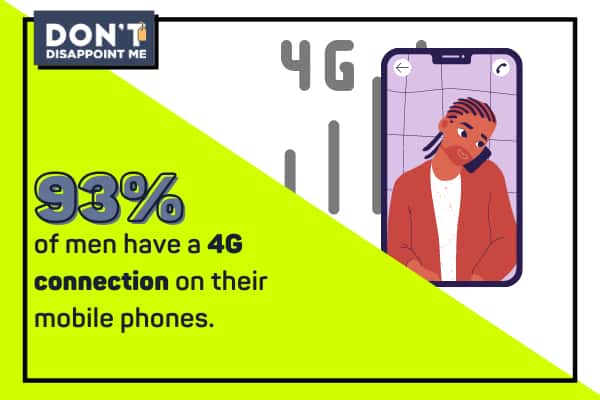 Almost all UK citizens between the ages of 16 and 24 access the net on a mobile phone, making this the biggest age group to use mobile internet in the UK.

25 to 34-year-olds follow with 97% of them connecting to the web through a phone. In comparison, only 40% of people aged 65 and older did the same, mobile data usage statistics collected by the UK’s Office for National Statistics show.

The number of men connecting to the internet via mobile is higher than that of women. According to 2019 data on mobile internet users, 78% of women in the UK older than 16 access the net through mobile compared to 80% of men. What’s more, male internet users in Britain are more likely to have a 4G connection on their phone than women (93% vs 90%).

Ofcom’s report suggests that as children get older, their preferences start to shift from other devices to mobile phones. Thus, over two-thirds of British children from 3 to 7 mostly use tablets to access the net, but half of youngsters between 12 and 15 years of age go online via mobile phone. 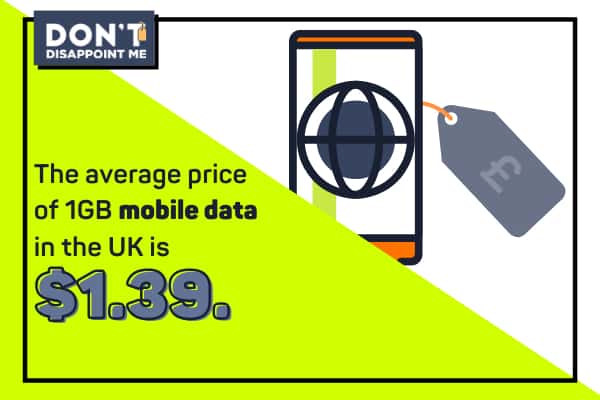 BT was the most popular among UK citizens when it comes to the top mobile broadband services, having 28% of the total market share. The other operators that came close are O2 with 26% and Vodafone with 21%, while the fourth main mobile network operator Three was lagging with a 12% market share.

EE, which is owned by BT, has the biggest 4G and 5G coverage in the country. More specifically, this network provider has almost complete 4G population coverage, although the other four networks are pretty close — all of them have at least 99% coverage.

In terms of 5G, EE also takes the lead, covering around 112 towns and cities in the UK.  O2 ranks second (108 towns), whereas Three and Vodafone are at the bottom of the list—these two operators have 5G coverage in 68 and 57 towns and cities, respectively.

22. The UK is ranked 59th in the world when it comes to the price of 1GB of mobile data.

Regarding the price per 1GB of mobile data, the UK is ranked somewhere in the middle. It’s not one of the most expensive, like Canada or the US, but it’s also not as cheap as China or Russia. In fact, the average price of 1GB of mobile data is $1.39, although bundled mobile data deals in Britain can go as low as $0.22 or as high as $64.65 per 1GB.

Mobile Apps Usage in the UK 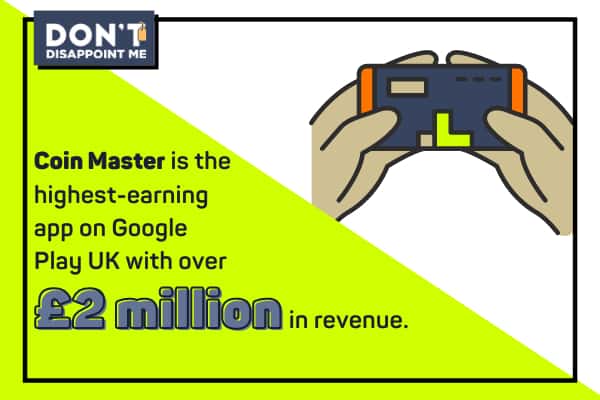 23. 76% of smartphone users use the Internet browser app.

According to app download and usage statistics in the UK, with 76% usage, the internet browser app is the most used app by people in the UK. Interestingly, e-mail services, messenger apps, and social media apps are all in second place with 67%.

With over 20 million downloads on both Android and Apple iPhones, the NHS contact tracing app was one of the most downloaded applications for 2020. In fact, on Apple Store, it came second only to the video communication app Zoom.

Coin Master emerged as the highest-earning app on Google play store in the UK with $3.4 million (over £2 million) in revenue, followed by Roblox, Candy Crush Saga, and Pokémon GO. On the Apple app store, however, Tinder was the most profitable app in 2020, generating around $2.5 million (£1,826). 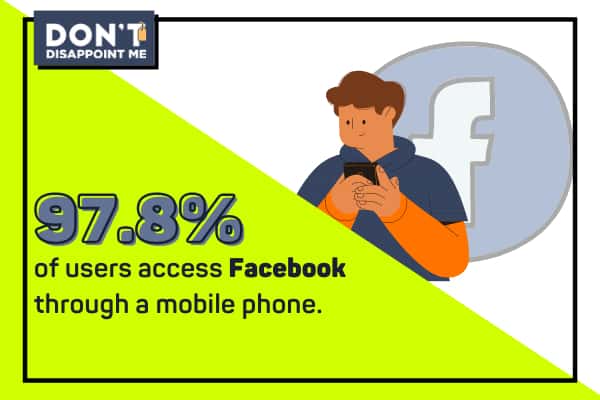 26. 98% of active social media users log in through mobiles.

An incredible 98% of the 45 million active social media users in the UK log on to their social networking accounts from their mobile device.

Mobile e-commerce is growing in the UK. At the start of 2019, 2.49% of online shopping visits through mobile phones were converted into purchases, a number that increased to 3.5% in Q1 2020.

Mobile shoppers, defined as someone who has made a purchase through a mobile device at least once, have been on the rise across Western Europe, including the UK. In 2018, there were over 31 million mobile shoppers in Britain, accounting for 66.7% of all internet shoppers.

29. How many internet videos are watched on mobile?

In 2019, 31 million people in the UK watched a video via a mobile phone at least once a month. However, with over 34 million users, the TV set was still the Brits’ favourite go-to-device for watching videos.

The term navigation app encompasses applications such as Google Maps or Global Positioning System (GPS). Interestingly a 2017 survey of over 900 respondents showed that 36% of people in the UK used navigation apps only occasionally.

Mobile Search Spending in the UK 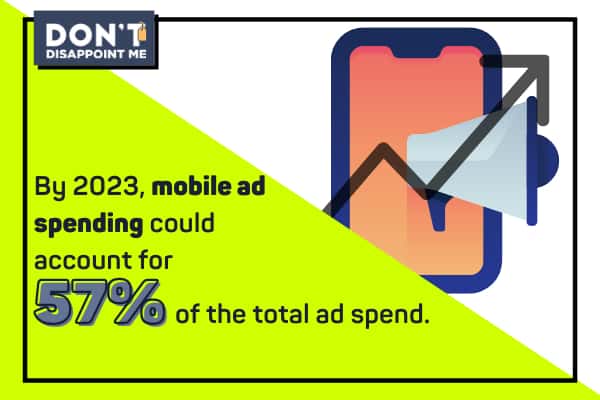 Mobile ad spending recorded the most significant growth in 2019, making up 47% of all UK advertising spending. And that’s not all! Mobile ad expenditure is expected to grow in the future. Actually, by 2023, it could account for 57% of total ad spend, or reach a whopping $21.1 billion (around £15 billion).

33. Mobile video is expected to take over banner ads when it comes to spending.

Research from eMarketer projects spending on video formats to be slightly higher than banner ad expenditure, which has made up the majority of ad spending so far. Today, thanks to advances in 5G technology, mobile search trends in the UK expect spending on mobile video to grow rapidly, reaching up to $6.7 billion (over £4 billion) by 2023.

34. Ad spending growth for desktop should be higher than mobile across several sectors.

Mobile will continue to account for most of the digital ad spending in 2020, but not across all industries. Ad spending growth on computing products, consumer electronics, and finance-related services is expected to be much higher for desktop than for mobile. 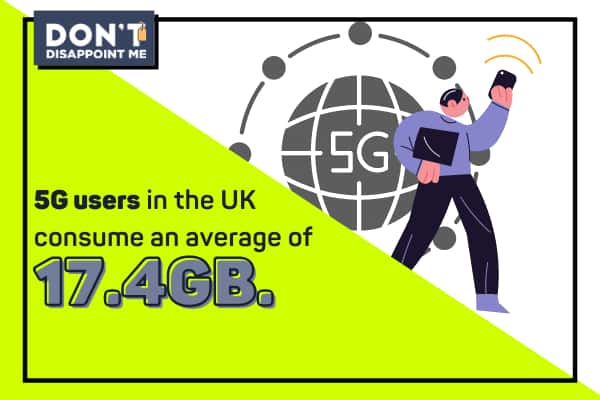 35. The use of mobile data is expected to increase.

It’s now estimated that mobile internet users will consume around 4GB per customer and even higher with the introduction of 5G. 5G users in the UK consume an average of 17.4GB, which is 2.5 to 2.7 times higher than the average mobile data consumption by 4G users.

36. The British government plans to invest £28 million to test new uses of 5G.

The government and businesses will invest £28 million in nine nationwide projects to help industry and improve people’s lives through 5G mobile internet usage, statistics in 2021 predict. One of the projects will see Sir David Attenborough use 5G to show more of the natural world wonders to audiences across the country, while another will attempt to boost tourism sites, like the Eden Project.

5G, a report by Vodafone suggests, could give the UK economy a much-needed boost after the COVID-19 pandemic and its disastrous consequences. Vodafone argues that 5G technology could provide secure access to public services, such as healthcare and education, as well as enable the UK workforce to work remotely.

As these mobile phone internet usage statistics clearly show, mobile internet penetration in the UK is growing rapidly, and it has no intention of slowing down.

So, whether you’re a marketer looking to exploit mobile internet trends to promote your business, or a user searching for more insight into the significance of mobile internet, we hope that the information we collected has given you the answers you need.