Who doesn’t love the excitement of opening a present? Well, that’s precisely the feeling companies that offer subscription boxes are trying to recreate for their customers. What exotic treat, new beauty product or geeky collectable might arrive at your doorstep with the next delivery? Not knowing is part of the fun!

It’s to be expected, then, that subscription box services have become big business in Great Britain. If you’re curious about the latest trends in this industry, you can explore the UK subscription service statistics below and perhaps be inspired to sign up for one yourself.

Let’s have a look.

Statistics on Subscription Boxes in the UK 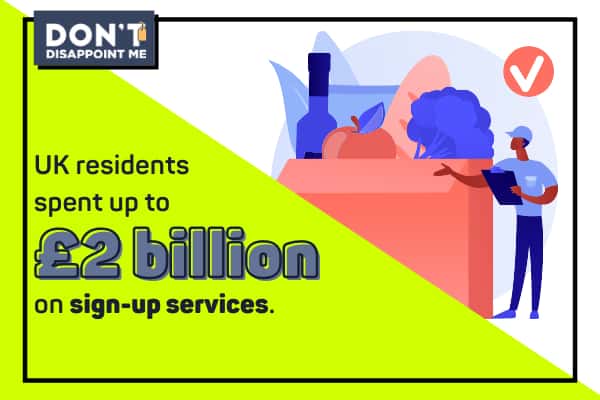 According to subscription box statistics from GlobalData Consulting, over a quarter of Brits responded that they’d gotten a box for themselves or someone else in early 2019. In addition, in the year leading up to October 2020, 14% of shoppers in the UK had signed up for such a service.

2. UK residents spend an average of £2 billion on subscription box services every year.

In a 2018 survey, Brits reported that they’d ponied up £2 billion for sign-up services. That’s spectacular, given that just a year prior, a study commissioned by the Royal Mail Group had put the annual spend on subscription boxes at £583.3 million.

3. The average Briton spends £552 a year on subscription box services.

Compared to 2019, spending on subscription boxes increased the most during the lockdown. At the height of it, the year-on-year increase was as much as 50.2%. In response to the soaring demand, 22% of retailers created new subscription box services, with 10% dipping their toes into this market for the first time, adding to the 28% that already offered this type of product.

5. The average spend on a subscription box in Great Britain ranges from £7.5 to £30.

6. 31.5% of Brits review their subscriptions only once a year.

Once people sign up for monthly subscription boxes in the UK, they tend to set them and forget them. A survey from February 2020 suggests that over a third of UK nationals review their subscriptions once a year or less. In the same study, 56.1% of the respondents admitted to sometimes forgetting to cancel subscriptions after the free trial period has expired.

Most Popular Subscription Box Categories in the UK 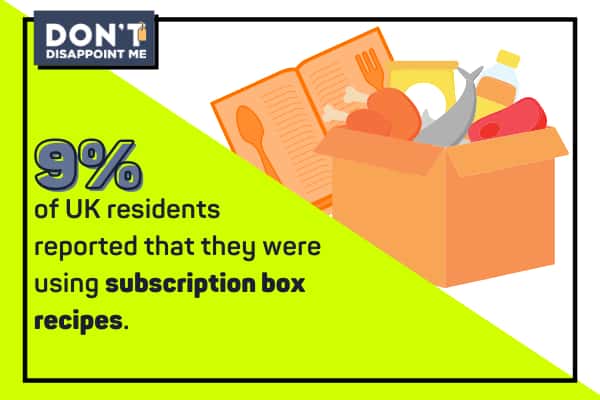 7. Food is the most popular subscription box category in Britain.

The appetite for meal delivery services understandably increased during the lockdown, going from 9% of Britons reporting that they were using recipe boxes in 2019 to 18% saying they’d signed up to receive meal kits in April 2020.

Graze led the pack in food subscription boxes in the UK in 2018, with 12.3% of all subscribers. Other similar brands British residents subscribed to were Hello Fresh, Gousto and Simply Cook.

When it comes to drinks, a survey on delivery subscriptions disclosed that 8.5% of Brits are receiving Pact Coffee’s boxes, whereas 7.6% have a subscription to the London Tea Club. On the other hand, they also like to sample alcoholic beverages through Tipple Box and the Craft Gin Club, with 7.4% and 6.4% of subscriptions, respectively.

9. Netflix is the leader among entertainment subscription services.

According to TV streaming service statistics, in Q1 2020, an estimated 13 million British households had Netflix accounts, making it the most popular monthly subscription. Far behind it in second place was Amazon Prime Video with 7.9 million subscribed homes. The average monthly spend on such online subscription services later that year was £14.09.

10. 31% of people get beauty subscription boxes in the UK.

Research shows that nearly a third of Brits subscribe to skincare, haircare and makeup boxes. The average spend on one of these is £10.99. Unquestionably, the most popular beauty box in the UK is Glossybox, with 8% of people being signed up for it. In turn, Birchbox has an estimated 200,000 subscribers in the country.

11. Shaving gear accounts for nearly one in four subscription boxes in the UK.

Statistics show that razor and shaving kits are among the most common subscription boxes for men, with 3.3% reporting that they’re using them. In 2020, they were the second most popular type of all sign-up services at 24%.

The male grooming subscriptions market’s overall value was an estimated £20.1 million in 2017, but it’s expected to balloon to a whopping £86 million by 2022. The top-rated brands in this category in the UK are Cornerstone, Harry’s and the Dollar Shave Club.

12. 22% of British residents were signed up for clothing subscription boxes in 2020.

Among the biggest subscription services in the UK when it comes to fashion are NextUnlimited and ASOS Premier, which had the highest share of subscribers in 2018 of 9.7% and 8.8%, accordingly.

In addition, another 2% had considered signing up for a petcare subscription box. Young British adults (aged 18-24) had the highest rate of such subscriptions at 5%. As for how much it cost them, the average price of one in 2019 was £12.50. By 2020, these services accounted for 14% of the UK subscription box market.

However, 2.1% of the survey respondents had cancelled or hadn’t renewed them, suggesting that magazine subscription gifts are on their way out. The most popular brand in this category was Stack Magazines, with 6.4% of subscribers. 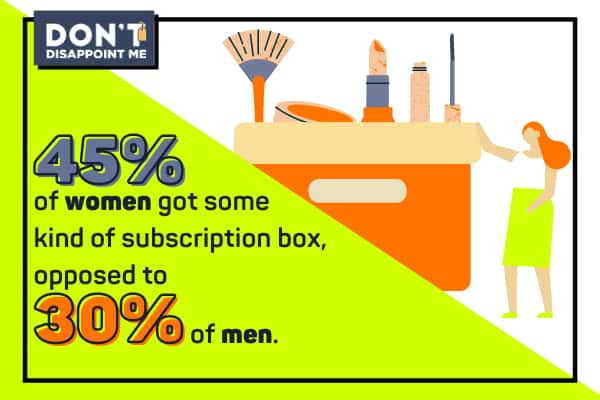 15. British women are more likely to sign up for subscription boxes than men are.

Subscription boxes for women are a hot ticket. A 2019 survey uncovered that nearly half of women (45%) in the UK got some type of subscription box service. On the other hand, subscription services were used by just 30% of men.

The same survey also found that an average of 43% of Brits aged 32-47 subscribed to at least one box or service. Somewhat unsurprisingly, respondents at the age of 65 and over had the lowest percentage of subscriptions at 17%.

According to UK subscription service statistics, in 2019, 45% of London residents used a subscription box service. Conversely, Northern Ireland had the lowest percentage of only 19%. A bit predictably, the capital’s denizens were most likely to subscribe to tea boxes.

18. Birmingham residents were the biggest spenders on subscription box services in 2018.

Interestingly, Brummies emerged as the real subscription box aficionados, dropping a hefty £18 million on them in one year. Sheffield residents tended to subscribe to healthy snacks, as 25% and 10% of them were signed up for Graze and Vegan Kind, respectively.

Reasons for Subscribing to Services in the UK 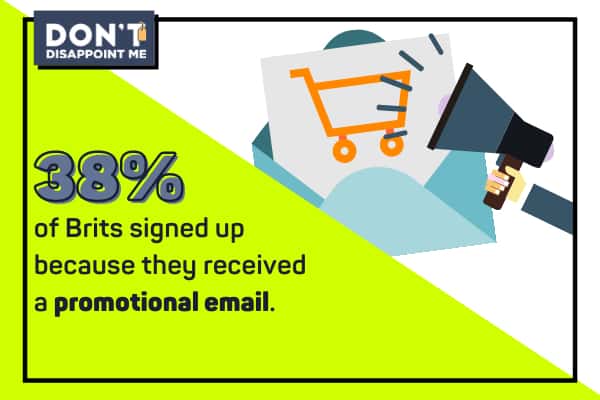 19. Why are subscription boxes so popular in Great Britain?

Subscription surveys show that 60.2% of Brits get subscription box services because of the good deals they offer. For example, they estimate that they save approximately £165 every year by subscribing to a service like Amazon Prime.

Furthermore, getting the goods and treats delivered to one’s doorstep was advantageous for 45% of subscription box users in the UK, whereas around a fifth (18.6%) of them just wanted to discover new things through these services.

20. 47.2% of Brits bought a subscription box based on a recommendation.

A 2019 survey suggests that nearly half of Brits signed up for a subscription box service based on word of mouth. Furthermore, the stats indicate that:

21. Recommendations also inspired 53.9% of purchasers to get subscription gifts.

Britons don’t buy subscription boxes just for themselves, and when shopping for a present, they do their research. Namely, 43.8% bought them as gifts based on good reviews they’d read. Additionally, UK subscription service statistics show that: 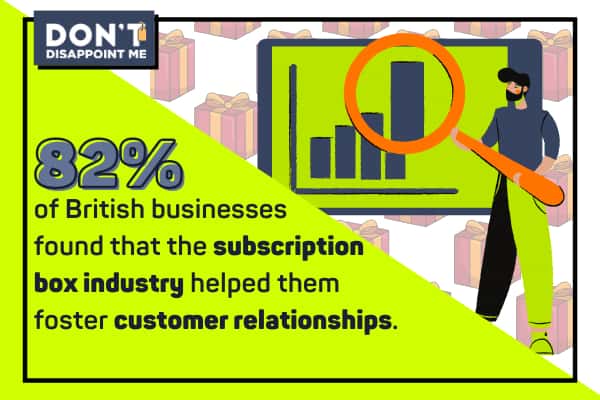 22. How many businesses in the UK plan to add new subscription boxes?

According to a 2019 Royal Mail survey, 58.6% of subscription businesses planned to invest in new subscription boxes or add something new to existing ones, with 51.7% intending to focus strongly on these services in the future.

Less than half (44.8%) of retailers reported that they’d created subscription boxes in the pursuit of greater brand loyalty. Furthermore, they felt that these products offered them more control, namely of their distribution (cited by 34.5%) and marketing and promos (24.1%), while low startup costs enticed this same proportion.

24. The biggest problem for UK subscription businesses is “churn”.

Customer retention and sourcing compelling new products are seen as the top challenges by 20.7% of subscription e-commerce companies. The “churn” rate (the percentage of people who cancel their subscription) in this industry is relatively high, and while nearly 60% of service providers manage to keep new subscribers engaged for up to three months, only about one in ten of them stay signed up for a year or more.

25. Why are so many companies gravitating towards the subscription e-commerce market?

Three-quarters of retailers reported liking sign-up services because they felt they could rely on their subscription box industry revenue more than on one-off sales. Furthermore, 87% believed that joining the UK subscription market helped them stay competitive, while 82% found that it helped them foster customer relationships. 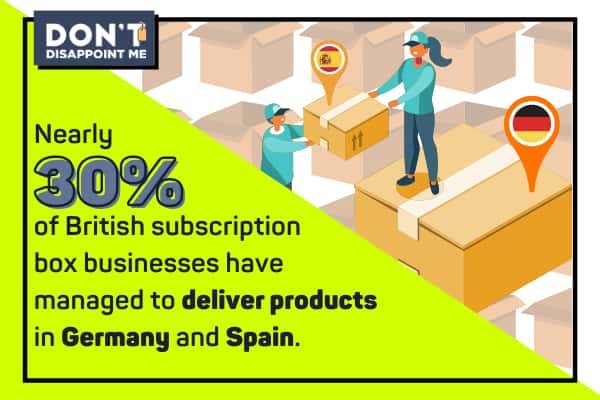 26. 89.7% of British subscription businesses make a profit from international sales.

Are subscription boxes profitable internationally? Reports indicate that nine out of ten of these companies generate at least some of their income from overseas. What’s more, 23.8% of subscription box services make as much as half of their sales outside the country. Small businesses in this industry also highlight international access as pivotal to expanding their customer base.

UK subscription service statistics reveal that 46.2% of these companies make at least a portion of their profit from sales to the Republic of Ireland and France. Also, about a third have managed to sell to customers in Germany and Spain, whereas 7.7% are even shipping to countries outside of Europe. 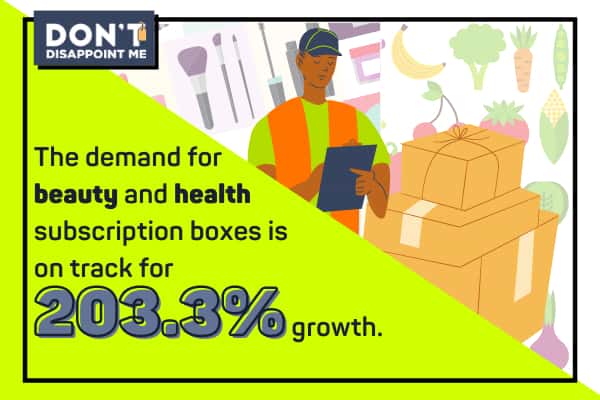 28. The UK subscription market is expected to grow 72% by 2022 across all categories.

According to projections, the various categories of sign-up wellness services are set to shoot up in popularity by 2022. The male grooming box bracket is likely to swell by 328.6% over 2017, whereas the demand for beauty and health subscription boxes is on track for 203.3% growth.

“Unboxing” is a popular way of giving a shout-out to companies, as more than 90,000 people type this word into the YouTube search bar every month. Since it’s the most broadly used platform in the UK, utilising it could prove a solid advertising strategy for British subscription services. In fact, some UK brands like Birchbox and Glossybox are already using social media channels to promote their goodies and boost sales.

30. Innovation in delivery is key to gaining a competitive edge in this industry.

In the increasingly crowded UK subscription box market, one way for companies to remain ahead of the pack is to make their deliveries as seamless as possible. This can be accomplished by making packages small enough to fit through a letterbox, the convenience of which has proven to be a big draw for customers. With a bit of creativity, subscription services have managed to post everything from flowers to wine bottles as if it’s regular mail.

Since we’ve all been cooped up at home recently, it’s hardly a surprise that subscription box services have picked up steam. They’re an affordable and easy way to treat yourself, discover new things, or surprise a loved one on a special occasion, all from the comfort of your own home. And, as these UK subscription service statistics suggest, the possibilities for growth and creating novel products and innovative subscription models in this industry are endless.