30+ Trippy Outbound Tourism Statistics in the UK for 2021

We all miss the days when we could travel without a care in the world, in the hopes of meeting new people, exploring new places, and discovering new cultures. However, now, with the Covid-19 pandemic wreaking havoc, it seems like traversing the globe will be a tricky affair.

Craving a holiday or a break abroad? Why not let these exciting outbound tourism statistics in the UK take you on a virtual tour?

Simply fasten your seat belts and enjoy the ride! 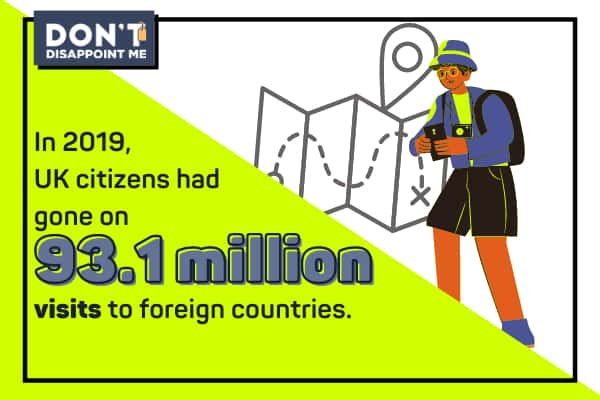 The number of UK visits abroad has plummeted due to the Covid-19 pandemic. However, UK travel statistics show that even though there was a drop of 24% compared to the same quarter of the previous year, Brits still took 13.9 million overseas trips in early 2020. By contrast, in 2019, UK citizens had gone on 93.1 million visits to foreign destinations.

A closer look at monthly outbound tourism reveals that foreign travel by UK residents has taken a nosedive. In fact, the month that recorded the highest number of outbound trips in the last three years was March 2019, when over 8.3 million Brits had travelled overseas.

3. The average length of trips abroad in Europe is eight nights.

The typical British tourist stays an average of 10 nights in other countries. Broken down by continent, Britons spend about eight nights in Europe and around 13 in North America.

4. London Heathrow is the most popular airport for outgoing travel.

In 2019, Brits went on approximately 21.9 million international trips via London’s Heathrow Airport, making it the most commonly used one for outbound tourism. Similarly, Heathrow was the airport of choice for international travellers arriving in the UK.

5. Air travel is the preferred method of transport.

Since it’s the most convenient way to travel on and off an island, it’s no wonder most UK residents choose flying over other modes of transportation. Namely, Britons took over 79.5 million trips abroad by air in 2019. Conversely, far less popular ways to travel were by sea and tunnel, outbound tourism statistics from the UK for that year show. 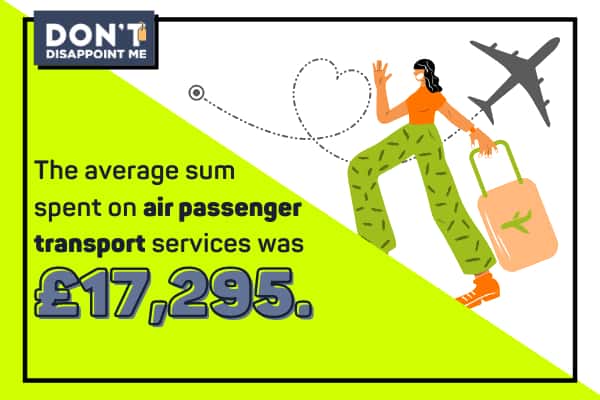 Tourism statistics in the UK show that in the first three months of 2020 alone, Britons spent over £9.2 billion on trips abroad. However, this was a 20% decrease compared to Q1 2019, pointing to the effects of the coronavirus outbreak on UK travel and tourism. The biggest decline in expenditure was recorded in Europe (a drop of 24%), followed by spending in other countries (16%) and North America (10%).

In fact, the total amount of spending abroad was over £62.3 billion in 2019. It’d soared compared to the previous year, when outbound tourist spending was valued at £45.4 billion. Namely, in 2018, Europe accounted for the lion’s share of outbound tourism expenditure, reaching £29.6 billion, whereas in North America it was much lower, estimated at £4.8 billion.

The average spending abroad per trip for any purpose by UK residents was £670. However, Britons tend to spend far more on holiday visits abroad, when their average expenditure is £739, or £843 if they’ve booked an inclusive tour, than they do when visiting friends and family.

When travelling abroad, Brits spend an average of £839 on accommodation services, whereas the average food and beverages tab is £868.

10. British nationals spend the most on air transport services.

Value of Tourism to the UK Economy 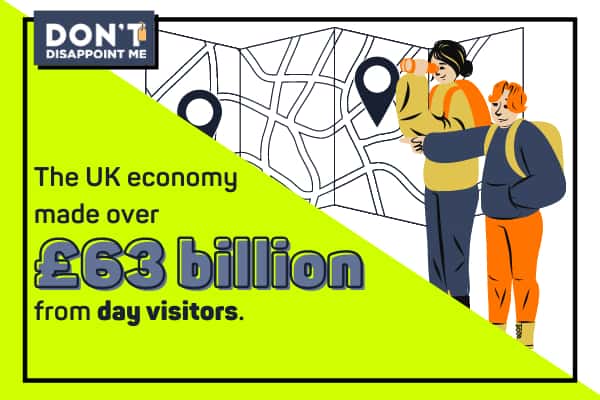 12. Day visitors generated over half of the total revenue from tourists.

Day trippers splurged the most in 2018. Specifically, the UK economy made £63.8 billion from day visitors, whereas the revenue from outbound and inbound tourism was £32.3 and £22.8 billion, respectively.

Outbound tourism plays a vital role in the British economy since its contribution totalled £37.1 billion in Gross Value Added in 2017, accounting for 1.8% of the UK’s GDP.

According to tourism employment statistics, in 2017, outbound tourism supported over 380,000 jobs in EU27 countries such as Spain, France, Portugal, Greece and Italy. Interestingly, UK tourism spending accounted for 52% of all direct tourism sector jobs in EU27 destinations.

15. The outbound tourism sector was expected to sustain over 200,000 tourism jobs in the UK.

Research by Cebr back in 2015 estimated that by 2020, there’d be approximately 200,000 full-time jobs in the outbound tourism sector, an increase of 11% over 2014. However, the coronavirus had other plans. Namely, the number of people whose primary occupation was travel and tourism went down by a staggering 10.8%, a comparison between Q3 2020 and Q3 2019 shows.

16. In three years, the UK government invested £40 million in tourism.

Tourism used to be one of the most successful industries in Great Britain, which is why the government-funded this sector to the tune of £22 million in 2018/19. 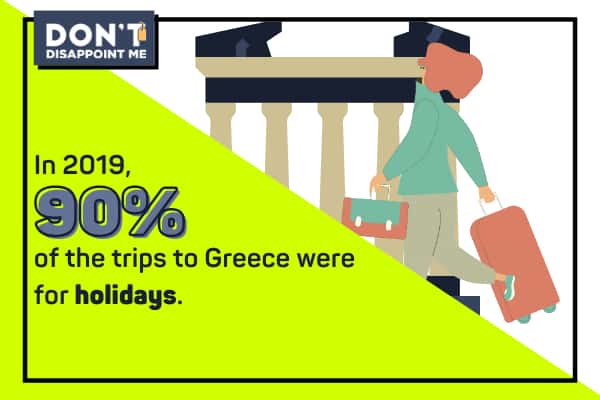 17. Spain was the most visited country by British tourists in 2019.

With 18.1 million trips in 2019 alone, UK outbound tourism statistics by country show that Spain is the go-to destination for Britons. UK nationals mainly visit the country for holidays—87% of trips to Spain were for vacation.

France (10 million), Italy (over 5 million), the USA (4.8 million), and the Republic of Ireland (just under 4.8 million) round off the top five most visited countries by British travellers.

Greece has become one of the most popular destinations for Brits over the last couple of years. Namely, 3.4 million trips to this Mediterranean country were logged in 2019, 90% of which for holidays.

The Gross Value Added by British tourists amounted to €15 billion across the EU27 countries in 2016. As expected, Spain was the country that profited the most from UK outbound tourism, followed by France, Italy, Greece, Portugal, and Germany. In fact, these seven countries generate 78% of the total GVA. 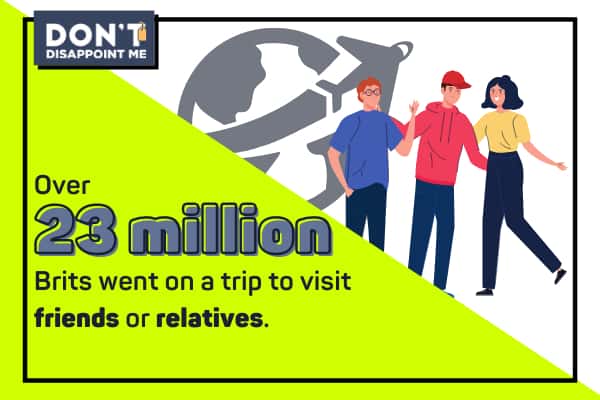 20. In 2019, holidays were the most common reason for going overseas.

Vacation travel accounted for around 58.7 million trips abroad taken by UK citizens in 2019, holiday statistics show. Specifically, 23.79 million visits were made by holidaymakers on an inclusive tour. In addition, 23.52 million people visited friends or relatives, while 8.98 million went on overseas business trips.

21. Spending on holidays far outstrips that on business trips.

In 2019, business trip spending netted £6.3 billion, a decrease of 9% from 2018. On the other hand, the total spend on holiday visits that year was £43.4 billion, approximately £29 billion of which accounted for vacationing in Europe.

22. Travelling is the main reason 35% of UK students take a gap year.

Gap year statistics in the UK show that many young people postpone entering higher education for a year to either work or travel abroad. Consequently, less than 15% of British students take a gap year to work overseas, while 35% do so just to travel. Nevertheless, the majority of UK gap year takers (almost 45%) use this time to stay and work in the country. 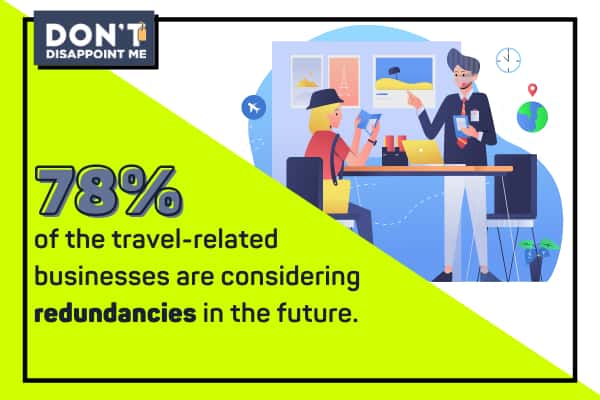 23. The UK could lose up to £22 billion in tourism revenue due to the Covid-19 pandemic.

According to the latest predictive travel statistics by the World Travel & Tourism Council, the UK could lose up to £60 million a day, mounting up to around £22 billion by the year’s end.

24. Nearly 40,000 people working in the travel sector have already been or might be laid off.

The Covid-19 pandemic has affected every industry in Britain, but the latest travel info for the UK reveals that this sector seems to have been hit the hardest. What’s more, the Association of British Travel Agents has warned that:

Outbound travel in the UK during Covid could get a little complicated with all the new safety protocols. That’s why 26% of the respondents in a 2020 Statista survey intended to spend their annual leave or vacation days mainly at home, while a third to go on holiday within the country.

Specifically, £402 million was spent on international travel in the second quarter of 2020, which was a 98% decrease compared to the same three months of 2019. This drop in expenditure was primarily caused by the coronavirus outbreak and the consequent travel bans. 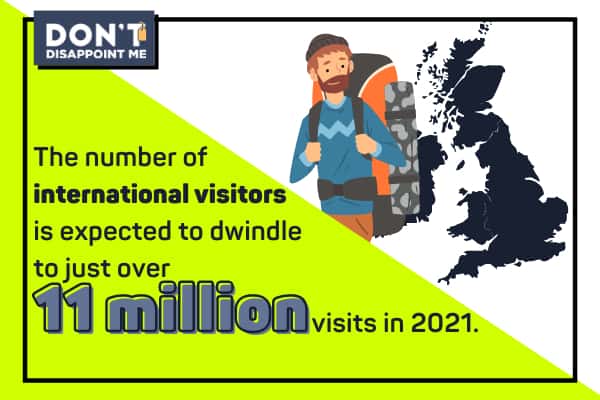 27. How many tourists visit the UK each year?

Visit Britain statistics show that in 2019, there were 40.9 million international visitors to the UK, spending around £28.4 billion. However, due to the pandemic, this number is now expected to dwindle to just 11.7 million visits by foreigners in 2021.

28. How many tourists visit Scotland each year?

The latest statistics on inbound tourism in the UK tell us that in 2018, Scotland was visited by over 15.5 million tourists, of whom 3.5 million were foreign. Additionally, tourist spending amounted to almost £5 billion.

29. London is the most visited city in the UK.

With over 21.7 million visits in 2019, London was the city most international travellers flocked to. Behind it were Edinburgh with 2.2 million and Manchester with nearly 1.7 million visits, respectively.

One of the main reasons why the capital attracts tourists is free admission to museums and the overall cultural experience. Of these, the British Museum is the most popular, attracting 6.24 million sightseers in 2019.

UK domestic tourism statistics show that in 2018 there were 118.6 million such visits, 2% less than the prior year.

The most popular destination for domestic tourism in the UK in 2018 was England, receiving 97.4 million visits and dwarfing Wales’s 10 million. England was also the region bringing in most of the spending (£19.3 billion), while Scottish tourism statistics indicate that this country generated around £3 billion from domestic tourists.

32. The South West region hosted the largest number of domestic visits in England.

The latest facts and figures about tourism in England show there were 19.1 million domestic trips to the South West in 2018, making it the most popular region in the UK. Right behind it were the South East with 16.2 million, the North West with 13.3 million, and London with 11.9 million trips. 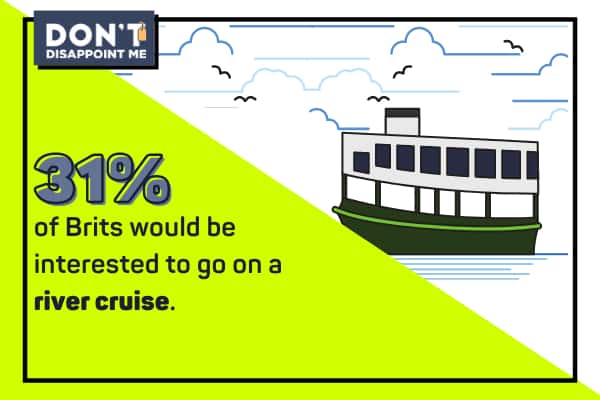 33. Holiday companies could see their costs go up by 58% because of Brexit.

A 2018 survey involving more than 130 British holiday companies on travel and tourism jobs abroad revealed that because of Brexit, over 25,000 UK nationals working in the EU’s travel industry could lose their jobs.

34. Spain remains the most desired destination for UK citizens in 2021.

Although the coronavirus pandemic will have a big impact on inbound and outbound tourism over the next few years, a third of Britons still plan to visit Spain in the near future. Additionally, UK outbound statistics in 2021 point to France (the desired location of 19%) and the USA (17%) as the other two countries at the top of people’s foreign destination lists.

35. 58% of British residents have expressed interest in cruises.

More than half of surveyed Brits said that they’d like to take an ocean cruise, while 31% would be interested in going on a river one. In fact, despite the coronavirus pandemic, people have already started booking cruises for 2022, particularly tours around Europe, the Caribbean and Alaska.

These outbound tourism statistics in the UK understandably highlight the sharp drop caused mainly by the Covid-19 pandemic. Hopefully, we’ll be able to go back to our globe-trotting ways soon and put these grim stats on the decline in tourism and its effects on the national economy behind us. However, until that day comes, we can still enjoy a staycation or two, can’t we?