Most of us do read a review or two before we buy something crucial or expensive.

But, how much of a difference do online reviews make for brands?

To illustrate the importance of reviews to both consumers and businesses, we compiled some facts and stats on usage, impact, and the latest trends on online reviews.

In Rush? Here I Have All That is Important On This Page..! 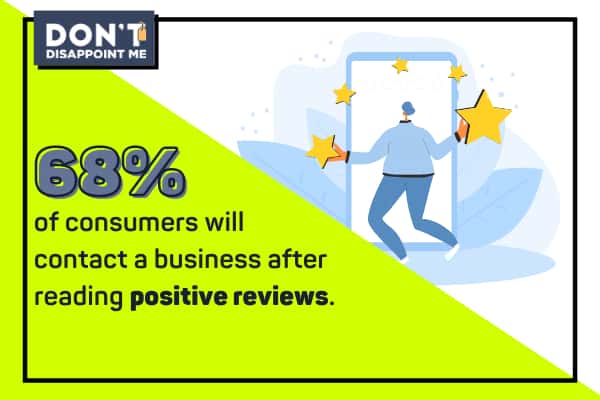 1. So how many people read online reviews in the UK?

The latest data from Reputations shows that in the UK, around 75% of the 62 million adults who use the internet regularly read online reviews.

The latest data from Hubspot’s report reveals that 38% of consumers read reviews now as much as they did two years ago, while 17% don’t rely on online reviews at all.

3. How many consumers read online reviews before visiting a business?

Nine out of ten (90%) shoppers read online reviews before visiting a business or making a purchase, which indicates that the impact of online reviews on customer decisions is very significant.

There isn’t much of a difference between women and men in terms of online review consumption—slightly fewer men (89%) read online reviews compared to women (91%).

According to the Competition and Markets Authority (CMA), approximately £23 billion of consumer spending in the UK is influenced by online reviews. At the same time, consumers research by the Spiegel Research Center reveals that if a product has a minimum of five reviews, it has a 270% higher chance for purchase than a product with no reviews. Plus, when verified buyers share their opinion, the probability of a purchase grows by 15%.

5. Online reviews for travel and hotels influence a purchase for 24% of consumers in the UK.

Statista data reveals that 24% of consumers in the UK have purchased a service related to the hospitality industry after reading online reviews. In the electronic items industry, 18% of respondents bought a product or a service after reading reviews.

6. What are the effects of online reviews?

According to FinancesOnline, 68% of consumers will contact a business after reading positive reviews, and 40% won’t deal with companies because of negative reviews. 36% of consumers feel that location and price are more important factors than online reviews.

7. 50% of consumers are more likely to buy a product after reading positive reviews.

8. 51% of consumers will purchase a product or a service if they see a mix of positive and negative online comments but a positive rating overall.

In fact, this is what prompts British consumers to buy, when reading consumer reviews:

9. 23% of consumers in the UK are not concerned about censorship of negative reviews.

47% of British consumers believe that brands manipulate their image by creating fake reviews, while 40% of consumers are concerned about brands deleting negative online reviews for their benefit. On the other side, 37% of consumers weren’t even aware that brands remove or censored negative reviews on some platforms.

How Many Consumers Trust Online Reviews? 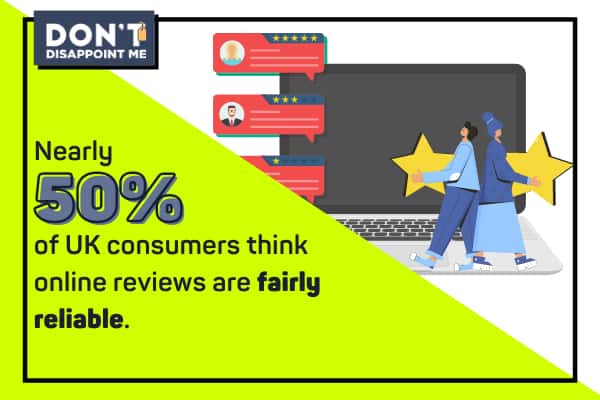 10. How many people trust a business more after reading positive online reviews?

11. Over 50% of consumers in the UK trust online reviews.

12. Consumers aged 35 to 45 are the ones that trust online reviews the most.

But 39% of the shoppers aged 55 and older trust more in recommendations from friends and family. In fact, 31% are doubtful about online reviews, and 8% feel they aren’t trustworthy at all.

Another survey shows that 92% of shoppers won’t trust a business or purchase a product if it has no reviews.

13. 36% of consumers would rather purchase a product or service with a high overall rating and a small number of reviews.

The bigger part of consumers (45%) prefer to make a purchase of a product or service that has an average overall rating but a large number of customer reviews. Seems like this opinion is more strong among men (49%) and consumers up to age 44 (50%).

How Negative Reviews Affect a Business 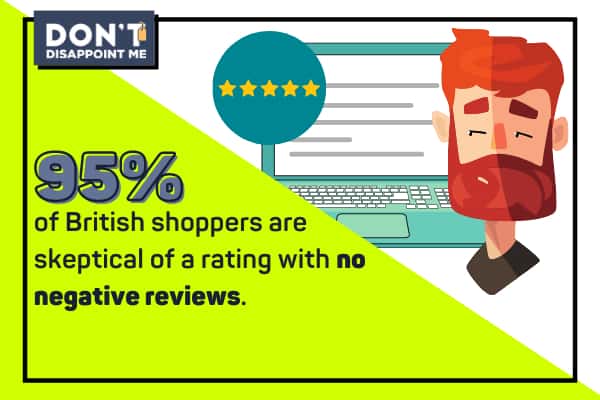 14. 38% of Gen Z consumers will avoid a business after reading a negative review.

The latest data shows that 38% and 34% of UK consumers who avoid a business after reading a negative review are Gen Z and Millennials, respectively. It seems like Baby Boomers are least concerned about negative reviews since only 16% of them won’t consider a product or service after reading negative evaluations.

15. 85% of customers think a perfect rating is hardly believable.

It turns out positive reviews may have a negative side. Here’s what we found about the benefits of negative reviews:

16. How much can a bad review hurt your business? 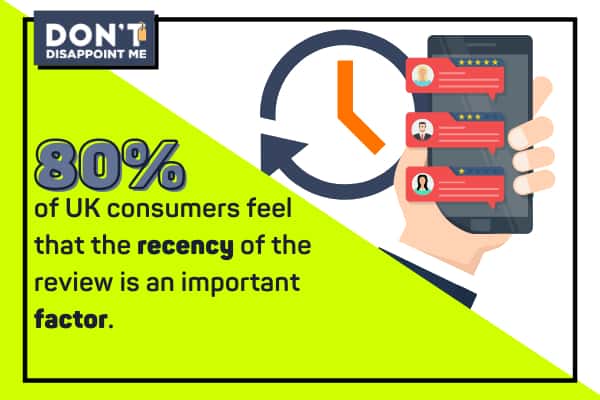 17. 4% of customers read only one review before forming an opinion about a business.

The latest Local Consumer Review Survey reveals that 31% of the consumers read between four and six reviews before forming an opinion about a business. 20% read up to ten customer reviews, and 25% read two or three. The smallest proportion of consumers (3%) read 51 and more.

18. In 2020, the review factor that influenced consumers’ choices the most was the overall star rating.

84% of respondents to the Local Consumer Review Survey agree that the most influential review factor on consumers’ choice is the overall star rating. The legitimacy of the review or how honest it seems is a close second with 81%. 80% of the consumers feel that the recency of the review is also an important factor.

19. 52% of shoppers consider using a business if it has a 4-or-more star rating.

20. 50% of customers read online reviews up to two weeks old.

85% of customers won’t read reviews older than three months, and 40% care only about online reviews less than two months old.

Another survey by BrightLocal, tells us that 50% of the respondents will only consider reading reviews written in the last two weeks. 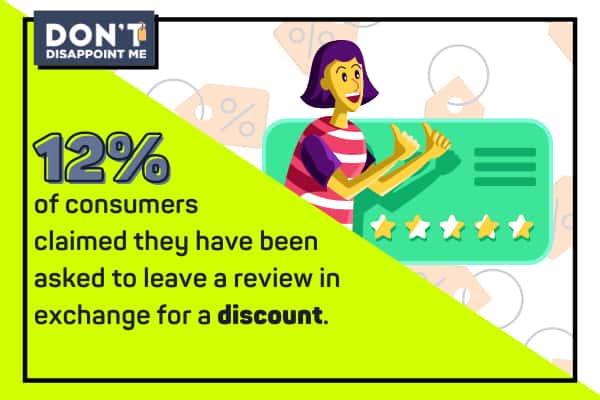 21. Only 3% of UK consumers think that brands should invite their customers to write a review.

51% of consumers think that anyone who has an opinion about a business or a product should be allowed to write a review, except those who are somehow involved with the business. 42% think that only people who purchased a product or a service should write online reviews, while 4% say that no-one should leave reviews since their opinion will be too biased.

22.  What percentage of customers leave reviews?

Practically half of all internet users globally (47%) say they leave online reviews about a business, product, or service each month. Younger people are more likely to leave reviews. For instance, the proportion of internet users aged 25 to 54 who leave reviews at least once a month is 53%. On the other hand, 39% and 30% of those users are aged 45 to 54 years and 55 to 64, respectively.

23. 12% of consumers have never written a review and don’t plan to write one.

24. 45% of customers were asked to leave a review via email.

According to BrightLocal, the most common way customers are asked to write reviews is via email—45% of respondents recall this. 34% of consumers were asked in person, and 30% on a receipt. 26% were approached through social media, while 24% were asked over the phone. The least common way businesses ask customers for reviews is via chatbot with 15%.

25. 9% of consumers have been asked to leave an online review in exchange for cash.

12% of consumers claim they have been asked to leave a review in exchange for a discount, while 8% have been offered a gift or free services. 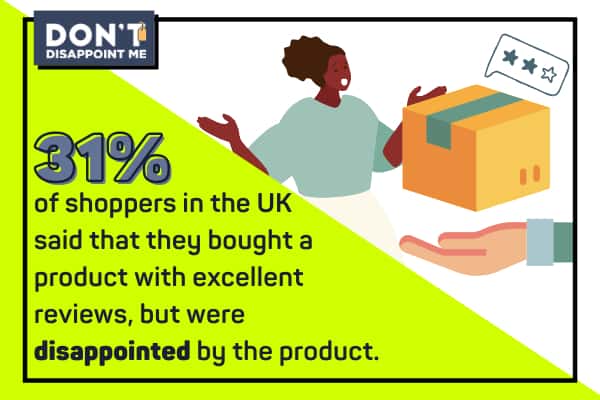 26. Almost every consumer in the UK has heard of fake online reviews.

90% of consumers in the UK have heard about fake reviews, but only 61% of them are concerned about them. 31% of shoppers said that they bought a product with excellent ratings and reviews but were disappointed by the product, suggesting that the impact of fake reviews in the UK may not be negligible. What’s more, over the last 12 months, approximately £63 on average were spent per consumer due to fake reviews.

27. Only 5% of consumers think that fake reviews on social media should not be moderated or dealt with.

28. Consumers aged 45-65 have the least tolerance towards fake reviews.

29. The CMA urged eBay and Facebook to review their sites for fake and misleading reviews.

Between 2018 and 2019, the Competition and Markets Authority (CMA) found troubling evidence that there was a growing market in the UK for fake and misleading reviews.

On Facebook, there were 26 groups in total, in which individuals offered to write fake reviews or businesses hired people to do so. During that time, over 100 listings on eBay offered fake and misleading reviews for sale. Both of the companies agreed to cooperate, and Facebook removed almost all 26 groups.

30. Consumers read the most reviews for services in the hospitality industry.

The latest data suggests that the most commonly read reviews are for services in the hospitality industry. 93% of consumers use the customer ratings and reviews when deciding on using restaurants and cafés, while 90% use them when picking hotels and B&Bs. 89% of consumers read online reviews for healthcare services, and 87% read automobile service reviews.

Where Do Brits Check Reviews? 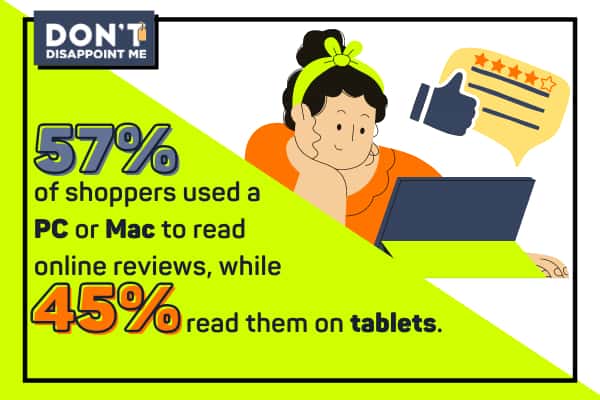 31. Google is the most often used platform for information about businesses.

Based on data from a survey, Google is at the top of the customer review websites list—almost 60% of consumers read reviews for products and businesses on Google. In comparison, approximately 45% of shoppers look for information about the brand on its own website. Almost 20% of consumers learn about a business on Facebook, and over 20% use Yelp.

32. Which are the most popular review sites for people in the UK?

According to SocialBuzzing, the most popular business review sites in the UK are Amazon Customer Reviews, Angie’s List, Choice, Trustpilot, TestFreaks, Which?, ConsumerReports, TripAdvisor, Yelp, and Google My Business.

33. Most consumers read reviews on their mobile phones. 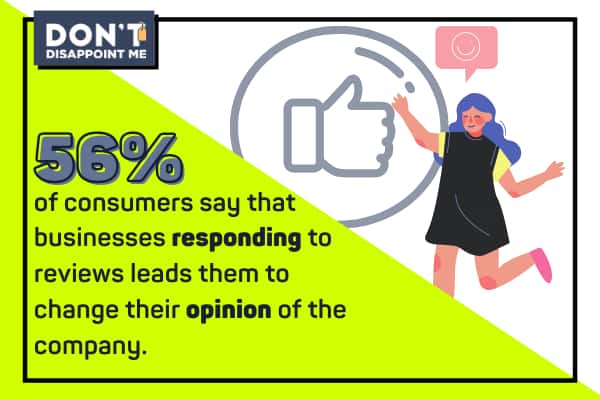 34. How many businesses respond to online customer reviews?

Most businesses (75%) don’t respond to online reviews. Not replying to client complaints puts firms at risk of increasing their customer churn by an average of 15%.

35. Almost 54% of shoppers expect to get a response within seven days.

Take a look at these consumer facts to get a better understanding of how replying to reviews affects shoppers:

How Important Are Online Reviews to Local Businesses 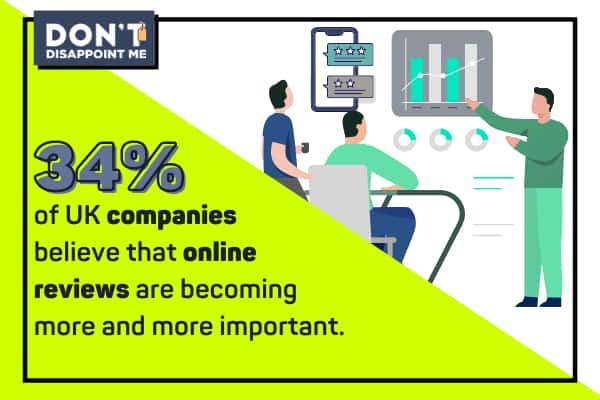 36. Only 9% of consumers search online for local businesses at least once a month.

The latest data from BrightLocal suggests that 93% of internet users search online for local businesses. 73% of the consumers searched weekly, and 34% of them searched every day.

37. Consumers aged 25 to 34 leave online ratings and review most frequently.

When it comes to leaving reviews for local businesses, 47% of consumers worldwide do so monthly. Younger people leave online comments more often—53% of consumers aged 25 to 34 left reviews at least once a month, while 39% of 45 to 54-years-olds did the same. Only 30% of consumers aged 55 to 64 posted online reviews monthly.

38. 17% of companies believe online reviews can make or break their business.

A survey among 1,000 businesses in the UK reveals that 75% of companies believe that online reviews, comments, and ratings are essential for the reputational and financial status of the business.

As these online reviews statistics clearly show, the importance of customer reviews is growing every day. Reviews are so essential that shoppers won’t even consider a business that doesn’t have any.

So whether you’re a consumer who wants to make a purchase or a business owner looking to set up an online reputation management strategy, we hope you found this collection of facts valuable.