26 Freelancing In the UK Stats for More Flexibility in 2021

Lately, a record number of professionals are choosing to freelance over committing to a full-time job. At the same time, various industries have been relying on freelancers to fill the employment gap caused by the recent changes in the working environment.

Want to learn about the latest freelancing in UK stats and trends? The following chapters outline the main pros and cons of freelancing in the UK, along with other important information.

Ten Fascinating Facts About Freelancing in the UK

How Many Freelancers Are There in the UK?

If you are wondering how much of the workforce is freelance, note that freelancers now account for nearly half of the 4.4 million solo self-employed workers in the UK.

2. The UK is the second fastest-growing freelance market.

The UK freelancing lifestyle is drawing an ever-increasing number of workers. Currently, the United Kingdom is ranked second on the top 10 list of freelancing countries with a 59% year on year revenue growth. It is only preceded by the USA, which notes a 68% revenue growth.

The UK’s gig economy is undergoing a radical change. Of the current 2.2 million freelancers in the UK, over 239,000 are in it as a side job besides other employment. Nevertheless, the majority, or 1.9 million, declared that freelancing is their main occupation. 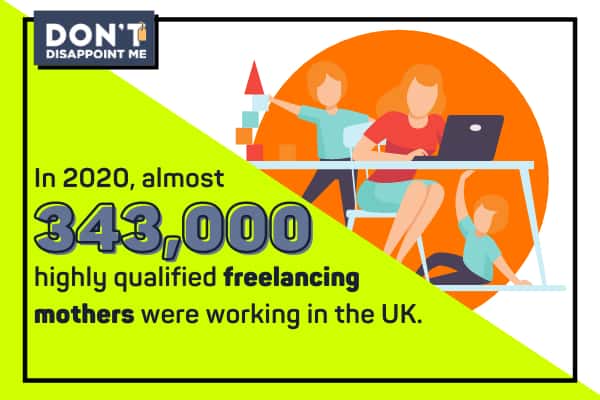 Half of the freelancers in the UK belong to the 40 to 49 and 50 to 59 age groups (24% and 26%, respectively). Freelancing is less common among younger generations—despite growth of 2%, the 16 to 29 age group still accounts for the smallest share (11%) of all freelancers in the country.

5. Disabled people are a growing segment of the UK freelance sector.

What’s more, 2019 data on freelance employment shows a large portion (42%) of the self-employed disabled workers operated in the three most highly skilled occupational categories, such as IT, marketing, and health care.

An earlier freelance industry report from IPSE shows few differences between the self-employed and freelancers demographic in terms of ethnicity. Namely, most of the members of both groups identify as white (88% among freelancers and 89% out of the solo self-employed).

Nevertheless, certain ethnicities, such as the Bangladeshi and the Pakistani, have recorded large increases in 2019—123 per cent and 29 per cent correspondingly.

7. Manchester is the best city for freelancers.

Despite the freedom freelancing offers, this group of self-employed workers still seek an optimal location to set up shop. Similar to the UK solo self-employed, freelancers are situated in the country’s largest cities, with the majority living and working in the Greater London area (24% opposed to 18% solo self-employed).

According to Money Supermarket, Manchester is the best city for freelancers in the UK, considering the work opportunities and low property costs.

8. The number of freelancers in the South West and the Midlands has increased.

Going up by 18%, the South West has seen the highest growth in the number of people working freelance in the UK.

Seen by nations, Wales has witnessed the largest growth with 17%, while Scotland and Northern Ireland also recorded a rise of 6% and 4%, accordingly.

The North tells a different story, though. The number of freelancers in the North East declined by 18% while dropping by 10% in the North West.

9. Women’s representation in freelancing increased in 2020.

Freelance women have been revolutionising the UK economy recently, with the number of women in this sector increasing by 2% from 2019. The 2020 gender ratio across British freelancers counted 44% female and 56% male freelancers. The growth of female representation is the result of several changes:

The biggest increase of 28% was recorded in professional and technical occupations. SOC 2 professional occupations also witnessed a rise of 12% regarding the number of working mothers. However, there were 6,000 fewer freelancing mothers in the highest-skilled occupations, including managers and senior company officials. 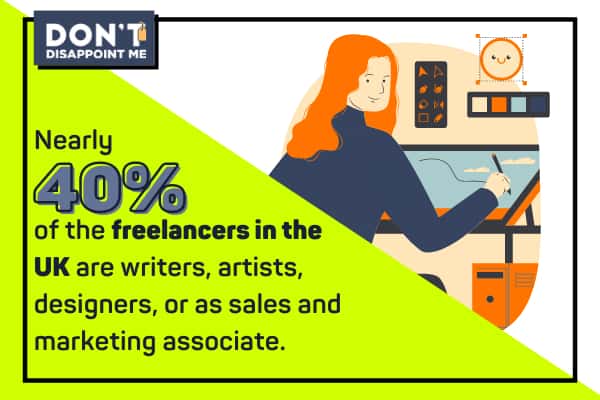 11. 39% of freelancers in the UK work in associate and technical occupations.

The most coveted skill sets requested from UK freelancers are related to the associate and technical occupations. In particular, over 845,000 UK freelancers (39%) work as writers, artists, designers, or as sales and marketing, health, business and finance associate professionals.

The number of freelancers doing professional occupations has gone up by 2% to 784,000 workers, but the percentage of those working as managers has declined by 4%. Today there are 528,000 freelancers in managerial positions.

12. What are the top online freelance jobs in the UK?

According to IPSE’s latest report, artistic, literary & media occupations are the most popular, accounting for 16% of all freelancers in Britain. These jobs are followed by managers & proprietors, who make up 10% of all freelance workers in the UK. On the other hand, teaching and educational professionals account for 7% of the freelance workforce, whilst functional managers & directors (6%) and IT & telecommunications professionals (6%) round off the top five occupations for freelancers.

Research carried out by Glassdoor on freelance work in the UK shows an average hourly wage of around £13.77 for a UK freelancer. Freelance tax consultants seem to be the best paid, making £19.23 per hour, whereas web copywriters are among the lowest-paid—earning around £9.88 per hour.

14. Freelancing as a lawyer is one of the best-paid freelance jobs in the UK.

Protectivity’s 2018 analysis reveals the highest-paying freelance jobs in the UK. As reported by the findings, legal professionals make the most with an annual income of £57,293. Freelance investment consultants and web developers also get a solid annual salary of £50,000 and £42,500, respectively.

Health workers thrived as freelancers with an increase of 19%, while people working as a freelance designer followed closely with a boost of 17%. On the other hand, some occupations recorded a number drop. For instance, service professionals have declined by 15,000 workers, a reduction of a staggering 29% from the previous year.

Other declines were noted among those working as managers and proprietors of hospitality services (18%), engineers (17%), therapists (15%) and those in sales and marketing (8%). 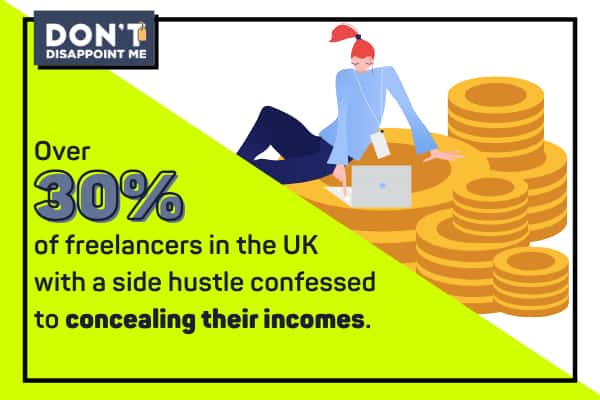 Even though there are no official statistics regarding the exact amount freelancers add to the country’s economy, it is estimated that their collective contribution stands at £146 billion, or 46% of the amount presented by the UK’s self-employed workers. However, IPSE calculates that revenue could be higher, putting joint contribution at an impressive £162 billion.

17. 34% of Brits who have side gigs do not declare the earnings from their projects.

Since freelancers are classified as self-employed, they must fill out a self-assessment return form and pay the corresponding freelance taxes on their income. Generally, UK’s self-employed workers must pay income tax, national insurance contributions (NICs) and a value-added tax (VAT). The annual income tax on freelance work in the UK is calculated on the total earnings and allowable expenses accrued yearly.

Still, according to a 2019 survey, over a third of freelancers with a side hustle confessed to concealing their incomes.

Benefits and Drawbacks of Freelance Work in the UK 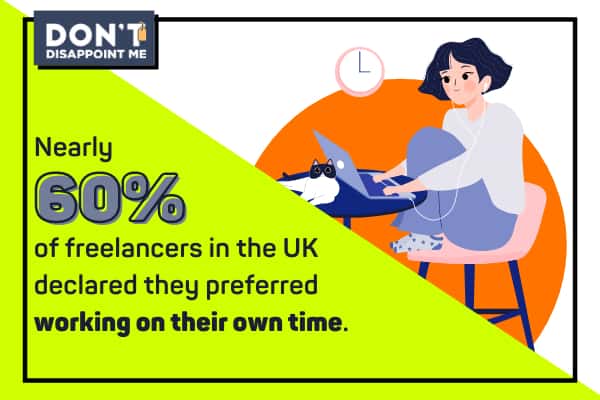 18. Two-thirds of freelancers think they made the right career move.

A significant part of UK freelancers think they made the right choice career-wise. This opinion possibly stems from the frustrations they experienced while employed full-time for a different boss or company. Still, commuting, cited by 13.6% of respondents in a 2019 survey,  was the biggest “hate” of freelancers, followed by stress at the workplace, mentioned by 13.1%. For 9.4% of freelancers, the biggest issue was not being your own boss and choosing the clients you work with.

19. In 2020, the number of freelancers accessing benefits increased exponentially.

Per the 2020 IPSE freelance industry report, an ever-increasing number of freelancers have begun claiming various types of benefits. Q2 2020 data reveals a trend to request almost all types of benefits, except for pension and tax credit benefits, which saw a decline of 12% and 29% in the number of applicants, respectively.

The greatest increase in the number of benefit applicants in 2019 was recorded for freelancers requesting Universal Credit (345%), income support (294%), and sickness or disability benefits (102%).

20. What are the top advantages of becoming a freelancer?

Freelancing is all about flexibility in deciding what to work on and when. Simply Business’s recent survey reveals the following major benefits for freelancers:

21. Inconsistent cash flow is one of the biggest drawbacks to going freelance in the UK.

Despite the various benefits of a freelance career, we must also note the potential disadvantages that may arise. Per Simply Business’s findings, the main drawback for 57.8% of UK freelancers is the inconsistent cash flow. Other disadvantages include the responsibility of finding a new freelancing gig (37.6%) and the lack of a company pension (29.8%).

In addition to the above, freelancers must pay for health insurance, handle their tax affairs, plan a long-term budget, and manage their work-life balance.

Freelancing Trends in the UK 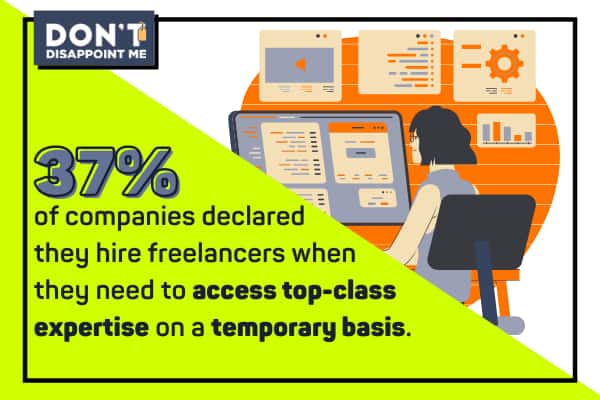 2020 was a difficult year for business, and many companies feel that they would like to avoid staffing issues from their list of worries. For that reason, as many as 57% of managers and owners believe it would make more sense, financially, to outsource services to freelancers. Moreover, 64% stated that they plan to hire more self-employed or freelance workers in the coming year, with most of them (62%) looking for employees across the globe.

23. Why do UK companies turn to freelance employment?

Recent research conducted by Kalido and OnePoll reveals that 64% of firms rely on freelancers, with 43% claiming they partner with contractors to manage their peak activity periods. Furthermore, 37% of companies declared they hire freelancers when they need to access top-class expertise on a temporary basis.

Other reported reasons for engaging freelancers are speeding up the workflow to meet project deadlines (32%) and injecting fresh perspectives into the company’s work processes (16%).

Unlike the assurances of timely payment provided by regular employers, freelancers occasionally encounter some payment difficulties. Once freelancers sign an agreement with a client, they usually expect to receive their fee through a payment portal once they deliver the promised results. However, one of the freelance websites in the UK, YunoJuno, discovered that four out of ten companies consistently paid late freelancing costs in 2019, while IPSE reports that 20 days per year are lost in collecting back payments.

25. Quarterly earnings of freelancers declined by 25% due to the coronavirus outbreak.

In addition to affecting all other aspects of modern life, the coronavirus crisis has had a detrimental impact on the freelancing sector as well. The Q2 2020 IPSE Freelancer Confidence Index shows a drastic decrease in demand for freelancing skills in Q2 2020. Freelancers worked only 5.5 weeks on average, which is half of the quarter’s 13 weeks. Consequently, their quarterly earnings declined by 25% on average.

26. Brexit is believed to have a negative impact on freelance workers in the UK.

The withdrawal of the United Kingdom from the EU significantly affected the UK’s freelance employment sector, especially considering that more than a third of the UK’s freelancers (39%) had at least one EU-based project or contract in 2019.

This significant percentage demonstrates the importance of EU connections to the UK freelancing workforce. The main concerns resulting from Brexit include, but are not limited to, business travel formalities and restrictions to and from the EU, tax and trading, as well as the ability to sell services into EU member states.

Whether you’re doing it for the flexibility of working remotely or as a side hustle for some extra quid a month, freelancing is a great way to get job experience without feeling tied down to a position or company. And with demand growing rapidly in the UK and globally, there is no shortage of opportunities for both freelance workers and employers to explore all the benefits of the market.

We hope that the freelancing in UK stats we curated will give you a better idea of how the sector operates and how it can help your career or business grow.