13 Eggs-traordinary Easter Statistics in the UK for 2021

Are you ready for Easter?

This year, the religious holiday of chocolate eggs and hot cross buns falls on April 4th. You probably know that Easter is a moveable holiday, but you might be surprised to learn that the date is actually determined by the appearance of the first full moon in spring.

What other facts and Easter statistics from the UK are you curious to find out?

Let’s go through the most exciting information together!

The Ten Most Fascinating Easter Statistics From the UK

Easter Facts and Figures in the UK 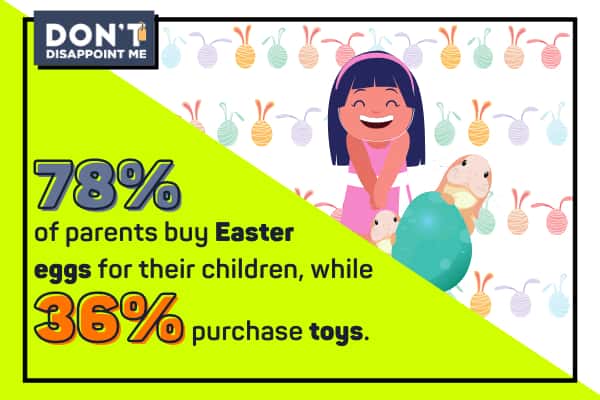 1. 76% of people in the UK associate Easter with chocolate eggs.

After Christmas, Easter is the most important religious festivity of the year. However, despite the apparent association between Jesus and Easter, only 55% of Brits connect the two. 76%, however, associate this holiday with chocolate eggs.

Broken down by age, Easter facts and trivia show that less than half of the UK population under the age of 50 connects Easter with the son of God. More specifically, 44% of 18-24 year-olds and 45% of those aged between 25 and 49.

2. The average child in the UK eats around eight chocolate eggs for Easter.

78% of parents buy Easter eggs for their children, while 36% purchase toys and 43% give them money in addition to treats.

Do parents go overboard for this holiday? Let’s see what figures and facts about Easter eggs tell us:

3. Over 20 million packs of hot cross buns are sold for Easter.

More than 20 million packs of hot cross buns are bought for this holiday in the UK. Furthermore, British shoppers spent £31.8 million more on these delicious treats in 2019, putting total sales at £153.1 million. Four and six-packs were the most responsible for the growth, with £15.6 million and £14.9 million, respectively.

4. Easter egg manufacturers are trying to cut down on packaging waste.

Did you know that 59% of Brits believe Easter eggs are over-packaged and would like brands to address this issue? In response to this, chocolate egg manufacturers have made attempts to reduce packaging.

Other companies are following in the same footsteps. Today, almost all of the packaging from eggs is recyclable. In fact, the only bits that cannot be recycled are individual chocolate bar wrappers and the plastic windows on the Easter eggs.

5. More than 3 million people travelled over Easter weekend in 2019.

According to ABTA, over 3 million Brits were travelling abroad or across the country during the long Easter weekend in 2019. The number of trips abroad, however, declined by 97% in April 2020 due to COVID-19 travel restrictions. This year, with lockdown still in place, Brits are more likely to take a holiday within the country, causing prices in certain popular domestic destinations to spike by 155%.

6. The most expensive Easter egg in the world is worth £5 million.

The Mirage Egg, created by Manfred Wild and worth £5 million, is the most expensive Easter egg in the world. It has thousands of diamonds in the shell and an 18-carat, handcrafted gold globe in the centre. Shame it isn’t edible! 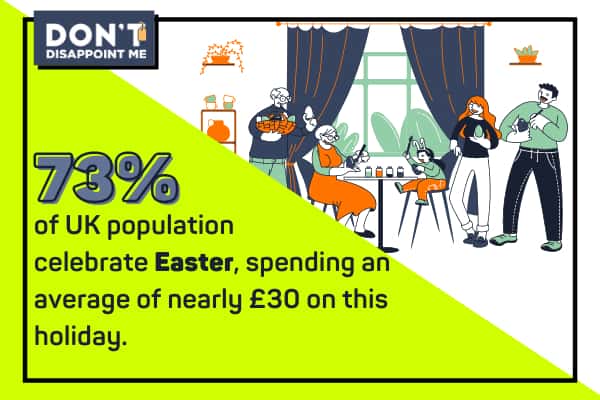 7. 62% of people living in the UK plan to spend money for the Easter holidays.

38.3 million people in the UK, or 73% of the entire population, celebrate Easter. Three-thirds of them intend to spend money, while 5.7 million are planning to observe the holiday without wasting a single penny.

Easter may not be as popular as Christmas, celebrated by 97% of the UK’s population. Still, Easter observances seem to be more widespread than Valentine’s Day festivities—32 million people in the UK celebrate the day of love by buying gifts.

9. How much money is spent on Easter candy each year?

UK consumers spend around £395 million on Easter eggs and confectionery alone. This colossal sum is equivalent to about 1,700 average-priced homes in the UK. That certainly is a lot of expenditure on Easter treats and chocolate!

Men tend to spend more on Easter holidays than women—£29.83 and £25.77, respectively. On the other hand, women are more likely than men to part with a few quids for Easter. A 2020 survey shows that 65% of women in the UK will actually pay money for this holiday, compared to 59% of men.

11. Millennials are the biggest fans of Easter.

What about spending by age? Here is what Easter spending statistics tell us:

12. The North East spends more on Easter than other regions.

Not only are Easter shoppers in the North East the biggest spenders (parting with an average of £39.47), this is also the region with the highest number of people spending money for this holiday. Namely, 73% of people in the North East splurged for Easter in 2020.

On the other side of the spectrum are residents of Northern Ireland, 57% of which are willing to spend money over the Easter holidays.

13. COVID-19 has made an impact on Easter shopping.

The number of people planning to buy gifts for others on Easter declined from 83.4% in 2019 to 80.5% in 2020. Furthermore, retail shopper penetration went down to 66.5%, while leisure spending dropped to zero last year because all leisure and non-essential retailers were closed down during the lockdown.

14. How many easter eggs are sold every year in the UK?

Estimates say that 80 million chocolate eggs are sold for Easter each year. Most of these Easter eggs are given to children, who eat them over four days, i.e. over the Easter weekend. Unsurprisingly, parents have a sweet tooth as well—27% of them admit to eating their children’s Easter treats.

15. Easter eggs make up 10% of annual chocolate spend in the UK.

Brits spend an average of £299 million on Easter egg chocolate every year. Judging by Easter egg facts and stats, this sum makes up 10% of the UK’s annual chocolate expenditure.

However, if you need more proof that British people love chocolate, consider this: The UK is the fourth biggest consumer of chocolate in the world, ranked just behind Switzerland, Germany, and Austria.

A survey on Easter shopping habits shows that parents spend an average of £25 on Easter eggs per child. The rest of the family adds another £31 per child, bringing the total to 56 pounds.

17. What is the most popular Easter egg in the UK?

The best-selling and most popular Easter egg is Cadbury’s Creme Egg. Introduced back in 1971, this delicious Easter treat dominates the world. 500 million Cadbury’s Creme Eggs are made in the UK every year, a third of which are exported to other countries. 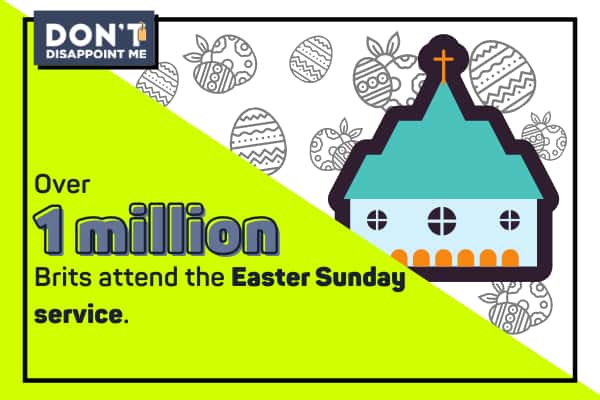 18. What percentage of people go to church on Easter?

19. Half of Brits don’t believe in Jesus’s resurrection.

20. 18% of respondents in a survey give up something for Lent.

Just under one-fifth of participants in an online poll said they gave up something for Lent. The percentage of people who adhere to this Easter tradition is highest among professing Christians and those who consider religion important (24% and 36%, respectively).

The most common things Brits give up for Lent include chocolate, alcohol and takeaway.

UK vs US Easter Facts and Stats 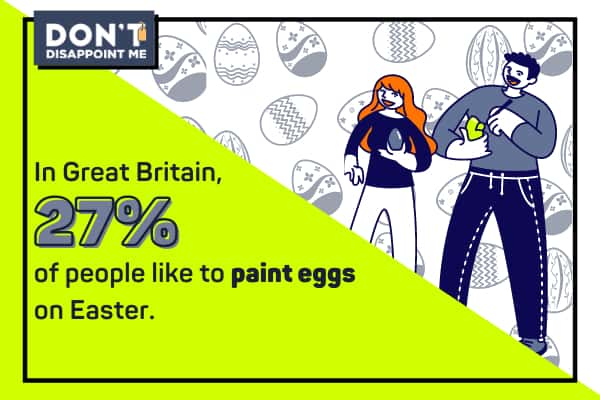 21. How many chocolate bunnies are made each year in the US?

In America, a total of 91 million chocolate bunnies are sold annually. Brits may have their delicious hot cross buns and Cadbury Easter eggs, but Americans seem to prefer gorging on chocolate Easter bunnies for this holiday. In addition to bunny treats, people across the pond consume an average of 16 billion jellybeans and more than 1.5 billion Peeps for Easter.

22. Giving baskets of candy is the most popular Easter custom in the US while eating hot cross buns is the favourite Easter tradition for people living in the UK.

Easter candy facts and statistics from Statista reveals that 60% of Americans give baskets of sweets, making this the nation’s most popular Easter custom. Second in line is the famous egg hunt, cited by 57%, while painting eggs (55%) is third.

23. Both Americans and Brits like giving sweet treats for Easter.

Chocolates and sweets are the favourite gifts of both nations, mentioned by over 70% of respondents in both countries as the best present for Easter. What’s more, 15% of Britons like to give flowers and plants (compared to 23% of Americans), whereas 13% gift coloured eggs (the same is true for 30% of US residents).

Despite lowered interest in this religious holiday, Easter statistics in the UK show that festivities are still observed, whether through the purchase of Easter eggs and treats or attending Church.