UK Divorce Statistics to Keep You Engaged in 2021

Are you looking to book a one-way ticket to Splitsville, but you’re wondering, “How much does a divorce cost in the UK?” Or are you considering getting hitched, but first want to find out what percentage of marriages end in divorce? Look no further—we’ve put together the ultimate collection of UK divorce statistics that will answer all of your burning questions on this topic.

UK Divorce Statistics That Will Give You Cold Feet

Divorce Rates in the UK 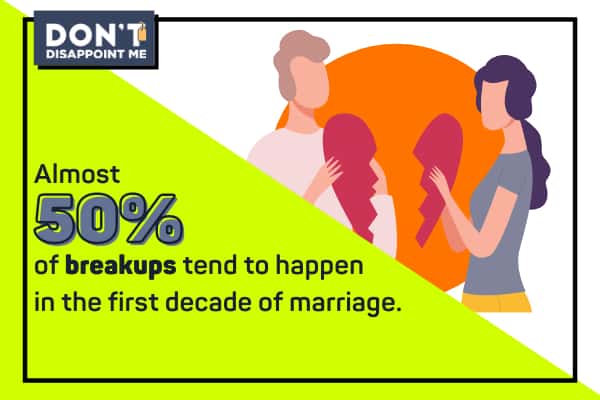 When it comes to the UK divorce rate, it’s at its lowest level in nearly half a century. According to the most recent available statistics, as of 2012, over four out of ten marriages in England and Wales end in divorce. Almost half of these breakups tend to happen in the first decade of marriage.

The number of marriages going through the divorce process grew by almost a fifth in 2019 compared to the year prior. According to the latest ONS divorce statistics, 108,421 couples in England and Wales got divorced in 2019. Meanwhile, the official data show 7,379 divorces registered in Scotland in 2018-2019 and 2,357 in Northern Ireland in 2019.

3. Over 99% of all divorces in Great Britain in 2019 were between opposite-sex couples.

The year wasn’t a good one for same-sex couples either—the number of such divorces in England and Wales almost doubled from 428 in 2018 to 822 in 2019. In Scotland, in turn, rates skyrocketed from just eight same-sex couples divorcing in 2017-18 to as many as 35 doing so the following year.

Expectedly, then, the 45-49 age range had the highest numbers of 10,946 freshly divorced women and 11,169 newly single men in 2019. By the same token, people in their forties had the highest marriage termination rate of all age groups that year, at 1.3%.

In general, men get divorced at a later age than women, both in opposite-sex and same-sex pairings. Specifically, the mean age of men who divorced each other in 2018 was 40.7, while of women who did the same—38.3 years.

5. Nearly two-thirds of divorce petitions in opposite-sex marriages are filed by the wife.

Women have been more likely to file for divorce in opposite-sex marriages in England and Wales since 1949, peaking at 72% of all petitions in 1992. Precisely 62% of opposite-sex divorces in both 2018 and 2019 were petitioned by the wife.

6. Almost three-quarters of same-sex divorces are between women.

The number of same-sex divorce proceedings in England and Wales has been increasing year after year, reflecting the growing size of the same-sex married population since March 2014. Women account for the majority of divorces among same-sex couples every year. Specifically, 74% of the 338 same-sex divorces in 2017 were between ladies.

7. Less than a third of second marriages end in divorce.

People who have tied the knot before are much less likely to get divorced if they marry again. Namely, according to a study by the UK’s Marriage Foundation, if partners were remarrying, they only had a 31% chance of getting a divorce, compared to 45% of splits involving spouses who had walked down the aisle for the first time.

Interestingly, the most crucial factor for a marriage’s longevity was the couple’s age—the older the newlyweds, the better.

8. Getting a divorce in the UK can take as little as 4-6 months.

Uncontested divorces are a relatively straightforward process. If both parties agree to a divorce and the reasons for it, the timeline from filing for divorce to legally finalising the divorce process shouldn’t take more than half a year. However, if the couple struggles to resolve financial, pension, child custody or other matters, it can take much longer.

Civil Partnership in the UK Statistics

10. Female couples account for over half of civil partnership dissolutions.

Since the first civil partnership dissolution was granted in 2007, more of them have happened between female partners than male ones. Female couples were responsible for 54% of all dissolutions in 2019, although historically, a more significant number of men have formed civil partnerships.

Marriage and Relationship Statistics in the UK 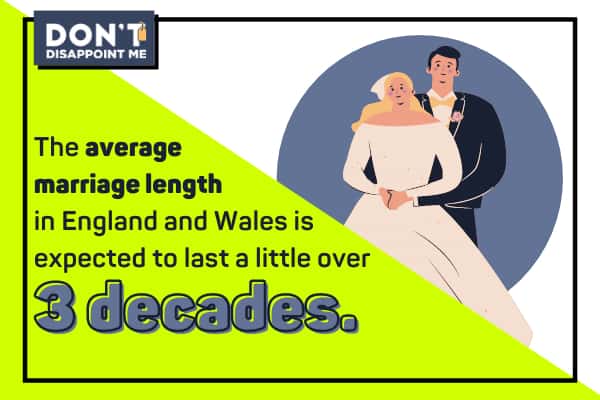 Compared to 2016, this was a decline of 2.8%. According to UK marriage statistics from the ONS, the downward trend correlated with a 9.5% decrease in religious ceremonies and a 0.6% drop in civil unions.

12. The popularity of matrimony has been steadily declining since the ‘70s.

In addition, UK marriage statistics show that 6,932 same-sex couples got hitched in 2017 as well. Male couples accounted for 44% of marriages, while female ones for 56%. On top of that, another 1,072 pairs converted their civil partnerships into marriages.

13. The average marriage length in England and Wales is 32 years.

The average marriage in England and Wales is expected to last a little over three decades before ending in divorce or death. By the 20th wedding anniversary, 34% of marriages will have ended due to the couple filing for divorce and 6% due to the passing of a spouse. Hence, 60% of married couples are likely to reach that milestone.

14. There are close to 3.5 million cohabiting couples in Britain.

If you never marry, you’ll never have to apply for divorce, right? ONS data shows that the number of unwed couples living together is growing faster than that of married couple and lone parent families, having seen an increase of 25.8% between 2008 and 2018.

Behind married/civil partner couple families at 67.1%, cohabiting couple families were the second most significant family type in 2018 at 3.4 million or 17.9%. This is because many partners nowadays elect to simply live together rather than exchange vows or move in together before they do, especially if they’re younger.

Reasons for Divorce in the UK 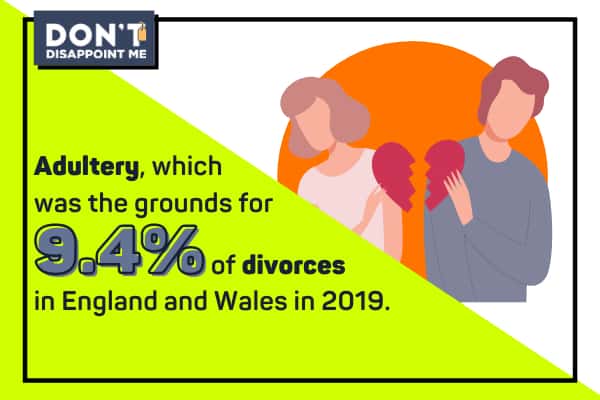 15. Unreasonable behaviour is the most common grounds for divorce in the UK.

Unreasonable behaviour was the reason cited in 44% of divorce forms in England and Wales in 2019, as 35% of husbands and 49% of wives in opposite-sex marriages petitioned for divorce on these grounds. In turn, 70% of male same-sex couples and 63% of female ones stated it as the cause of their relationship breakdown.

Until the new Divorce, Dissolution and Separation Bill comes into force and allows no-fault divorce in England and Wales, when you’re filling out, say, an online divorce form, you must list a reason for petitioning from among the following options (in addition to unreasonable behaviour, which we’ve already covered): 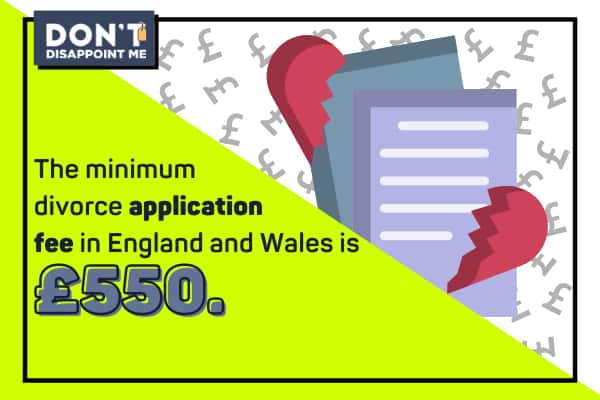 So how much does a divorce cost in the UK as of 2020? The minimum divorce application fee in England and Wales is £550. No matter how you go about it, these are mandatory court fee costs that must be paid, and they cover the court service and cost of divorce processing.

Usually, the person who petitions pays the divorce fee when submitting the divorce papers to court. Low-income petitioners may be eligible for financial assistance.

Divorce solicitors based in central London charge £500 before VAT or even more per hour. Other lawyers based outside of London have a smaller fee that can run between £150 and £350 pre-VAT. The cost of a divorce lawyer depends on the rates charged by the firm and the solicitor’s experience.

Suppose both spouses have agreed to end the marriage and their finances are straightforward. In that case, it shouldn’t be a problem to figure out how to get a divorce relatively quickly and cheaply. Of course, they’ll still need to go through the legal procedure of getting divorced or having the marriage dissolved.

Still, they can skip using the services of divorce solicitors outright. The £550 fixed fee for a divorce still needs to be paid by the petitioner, however. Online divorce services can set them back another £80-800, depending on their level of involvement.

20. Does it matter who is divorcing whom?

The other spouse is the respondent. Their legal fees are generally lower than those of the spouse filing for divorce, the typical cost being between £240 and £600. If both parties agree on all major issues, an uncontested divorce procedure won’t cost them more than that.

21. The adjudication court fee for a contested divorce in the UK is £255.

A contested divorce in the UK is the most expensive route to take. The court fee costs start at £255 for the application alone. On top of that, the counsel’s fee can hike up the cost of the divorce by up to £10,000-£15,000.

And that’s if the matter is settled at a negotiation hearing. If not, there will be further trips to court before the full contested final hearing, where a judge makes the final decision. All of this will amount to a staggering £25,000-£30,000 in solicitor and court fee costs.

22. The average cost of divorce in England and Wales through mediation is around £1,000.

Another way to save on divorce costs is to turn to a mediator instead of enlisting the services of a divorce lawyer since it does away with the need to go to court. An initial fee of £50-£120 is paid to assess whether the case is suitable for it or not.

Depending on how many meetings are needed, the divorce mediation cost can range from £300-£1,500. Nevertheless, it’s a small price to pay compared to the thousands charged if the case goes to court.

According to a 2018 survey by an insurance company on the real cost of a marriage separation, there are hidden expenses that go with it. For example, it found that over two-thirds (68%) of divorcing duos had to resolve financial matters. So, how long does a divorce take in that case? Usually as long as 14.5 months.

Therefore, if you’ve been wondering “How much is a divorce,” you must factor in things like having to buy your own car or going separately on holiday if you want a more accurate assessment. On the other hand, at least you’ll save on Valentine’s Day gifts.

Bringing Things to a Close

A marriage breaking down is never a pleasant thing to go through. However, even the most amicable divorce comes with a high personal and financial toll. How much does a divorce cost in the UK, then? As you saw from these statistics, it varies considerably, based on how complicated the case is and the type of divorce you’re seeking.

Uncoupling from someone isn’t a matter you’ll want to take lightly. The emotional stakes and amount of money on the line are reasons enough to seek skilled counsel for divorce advice. It’d be wise to do your research before committing.