Remember when travelling for work was par for the course? Right, neither can we. Nevertheless, business travel can play a major role in a company’s development, whether through making new connections, creating opportunities or expanding horizons.

If you’re getting itchy feet like the rest of us are and have been curious how much of travel is business related, we’ve put together some comprehensive UK  business travel statistics to give you a sense of what this landscape usually looks like. Who knows, maybe this information will come in handy when we get back to business as usual.

So let’s get this show on the road.

Essential Business Travel Statistics That Are Just the Ticket 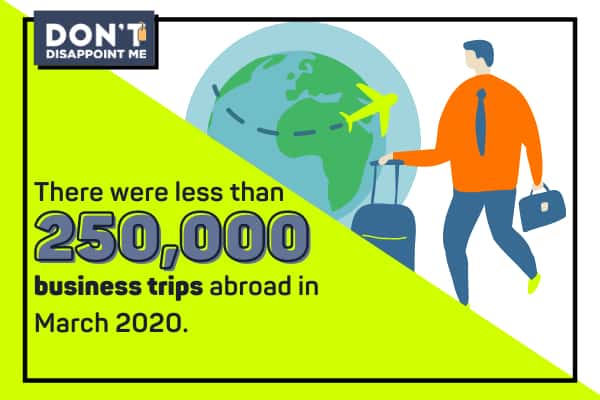 According to recent business travel statistics in the UK, 8.98 million business trips were taken outside of the country in 2019, mostly to Europe. Conversely, fewer than 250,000 visits abroad were made in March 2020, in sharp contrast to the highest number of monthly travels recorded in October 2018, at more than a million.

2. Britons took over a million business trips to the Republic of Ireland in 2019.

Business travel trends suggest that UK residents took 1,176,000 business trips to the Republic of Ireland in 2019. The second most popular destination was France with just over a million, followed by Germany with a little under a million visits. The USA and the Netherlands rounded off the top 5 destinations.

3. International travel for business usually lasts one to three nights.

Business travellers statistics tell us that approximately 4.6 million business trips lasted from one to three nights. What’s more, just over 3 million visits lasted 4-13 nights, whereas only 182,000 more than 28 nights. Cumulatively, Brits spent as many as 47.6 million nights on a business trip in 2019. 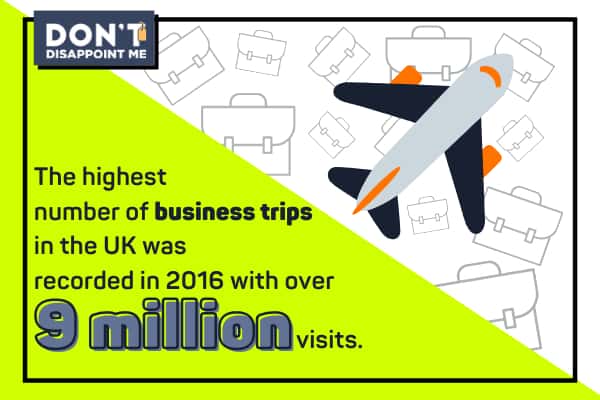 Recent research reveals that the number of business visits to the UK has plummeted. Namely, foreign residents took just under 300,000 business trips to the country in March 2020, down from February’s 751,000.

For comparison, the highest number of annual inbound work trips was recorded in 2016—a hefty 9.4 million.

5. Americans travelled to the UK for business the most.

In 2019, US residents took as many as 808,000 business trips to the UK, international business travel statistics reveal. Right on their heels were Polish and French nationals, who made 743,000 and 726,000 visits, respectively. Not far behind them were Germans, logging 720,000 business trips to Great Britain, while people from the Republic of Ireland visited 606,000 times.

Reports from 2019 show that England was the most visited country in the UK, with nearly 7.4 million business trips. This far outweighs the international business visits Scotland, Wales and Northern Ireland got, namely 371,000, 156,000 and 69,000, accordingly.

7. International business travellers spent over 36 million nights on business trips in the UK.

The latest stats from 2019 suggest that there’s been a decline in the number of overnight stays for inbound business trips, from a phenomenal 40.28 million in 2015 to 36.27 four years later. On average, Australian residents stayed the longest in the UK, for 15 nights, followed by Indians with 12 and Sri Lankans with 10. 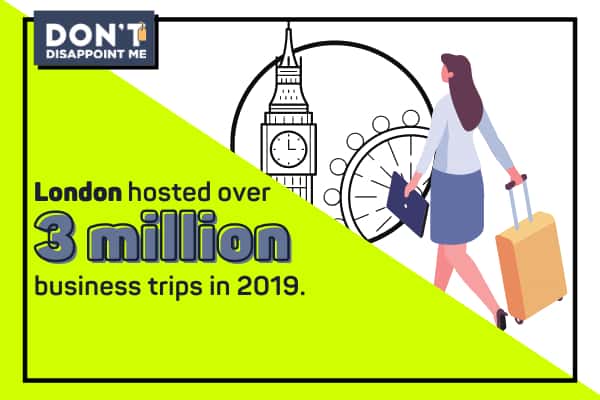 A survey revealed that UK business travellers took about half a dozen trips in the 12 months leading up to March 2017. Over a third of these excursions were international, while the remaining 64% domestic. Also, 72% of British bleisure travellers explored the same city they’d done business in, while 28% ventured further afield.

9. London is the most popular destination for business trips in England.

Business travel statistics counted nearly 14 million domestic business visits to England in 2019, 10.12 million of which to cities and large towns. London hosted 3.37 million or almost a quarter of them, whereas the North West came in second with 2.25 million. North East England was the least visited region for business, welcoming only 710,000 travellers.

A closer look at the 2019 business traveller demographics suggests that the percentage of male international business travellers in the UK was 74%. Nevertheless, the number of women travelling abroad for work increased by 2% over the previous year.

However, the overall ratio of business travellers (domestic and international) was more balanced, at 54% male versus 46% female.

A survey from 2019 further revealed that 4.13 million domestic overnight trips were taken by people aged 35-54 who had no children. However, parents in the same age group didn’t lag far behind (4.04 million). On the other hand, 16 to 34-year-old Brits with children accounted for the lowest number of business trips, at 1.15 million.

Business travel statistics derived from the travel and expense (T&E) app Rydoo reveal that 76% of Brits usually go on a one-day business trip. At the other end of the spectrum, just 2% spend 10 days or more on the road for work purposes. 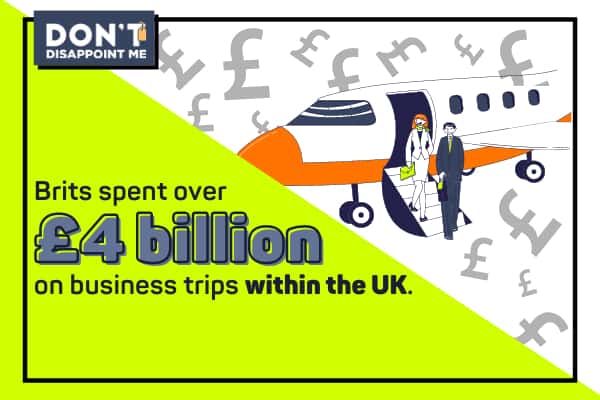 13. How much do companies spend on business travel?

According to business travel statistics, the third highest expenditure for SMEs in Britain is corporate T&E spend. In addition, more than 75% of the corporate travel spend is individual items under 50 euros—mostly meals, train and Uber rides. Furthermore, in 2019, the rate of expenses under 50 euros increased by 2.8%.

14. UK residents spent over £6 billion on international business trips in 2019.

An analysis by the ONS indicates that Brits spent £6.3 billion on business travel abroad in 2019, a decrease of 9% compared to 2018. By contrast, people from the UK dished out £43.4 billion on holiday trips out of the country, accounting for 70% of the overall international travel spend.

Business travel statistics reveal that Britons forked over the most cash—over £1.1 billion—to go to the USA for work purposes, followed by France with £569 million and Germany with £496 million. In addition, business trips within the country set UK residents back £4.56 billion.

16. How big is the business travel industry in the UK?

A recent report on the leading TMCs in 2020 reveals that American Express Global Business Travel was at the top in terms of gross sales with £2.3 billion, whereas CWT and FCM Travel Solutions netted nearly £1.3 billion and £831 million, accordingly. 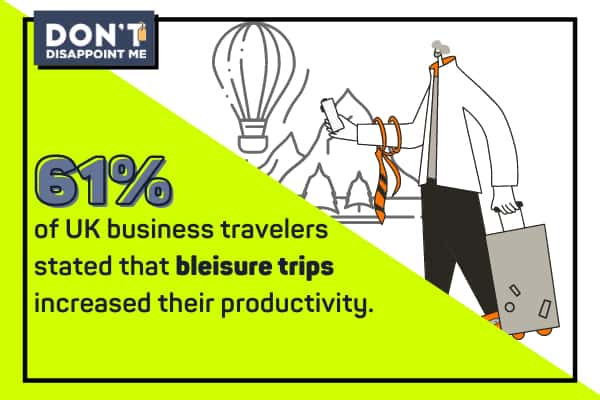 18. 56% of Brits’ business trips turn into bleisure ones.

An 2017 online survey about bleisure travel in the UK revealed that British nationals had turned more than half of their business trips in the previous year into bleisure escapades. Namely, according to business vs leisure travel statistics, to every 3.4 days of work, Brits added 2.8 days of play while away for business.

Nearly 80% of the business travellers interviewed in a 2018 survey believed that well-being improved after returning from a bleisure trip, while 61% reported increased productivity. However, 71% of the respondents pointed out that their employers didn’t actively encourage them to go on such jaunts before or after a work-related trip.

Some Odds and Ends about Business Travel Methods 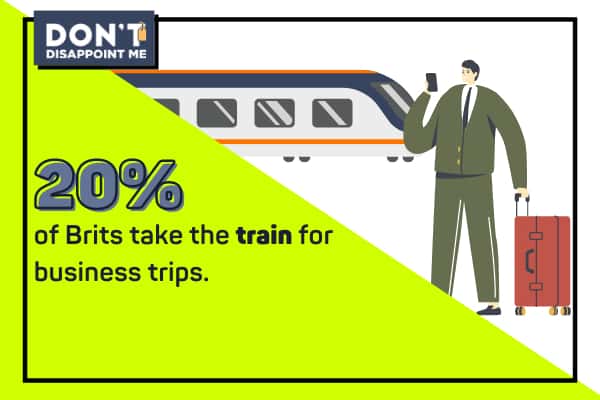 20. What percentage of air travel is for business?

Airline business travel statistics suggest that over the past two decades, flying for business purposes has seen a slight downturn. In 2019, it accounted for 17% of air travel from selected UK airports. For comparison, holiday trips and visiting friends and relatives accounted for 43% and 38% of flights taken, respectively.

According to business travel statistics, nearly a third of Brits go on business trips by car, while over 20% take the train. This would imply that they prefer getting to the continent via the channel tunnel and/or are fonder of travelling within the country than outside of it.

22. The most used airlines in the UK for business travel are British Airways, Air France and Easyjet.

Unsurprisingly, British Airways and Easyjet are the most commonly used UK-based airlines by business travellers, since Brits overwhelmingly travel for work within the country. Reports indicate that these are the only two companies that offer a direct flight to Jersey, which accounts for 11.8% of Britons’ business visits.

23. Every other manager thinks employees are prepared to travel again.

Almost half of travel managers believe that their workers want to get back on the road. However, their employees have different ideas about the future of business travel post-Covid.

Namely, 22% of workers reported that they were unwilling to resume business travel during Covid, whereas just 9% had all but packed their bags. Nonetheless, 60% said that a vaccine being available would make their bosses more likely to dispatch them on a work trip.

On the face of it, these business travel statistics may be all facts and figures, but the true value of travelling for work is measured by the relationships forged along the way. Business trips lend that human touch which, try as we might, we cannot replicate via remote conferences on Zoom.

Here’s hoping that overseas travel can resume as usual in the near future and face-to-face meetings can continue to make their essential contribution to the evolution of companies.