Did you put money in a piggy bank when you were little? Or maybe kept a secret stash somewhere under the bed so that you can buy that new PlayStation game? Think about it: you have been saving your whole life.

And it’s a good thing you did! It turns out that the average savings in the UK today are below £10,000 or far lower than what one needs for a comfortable retirement. Not to mention a medical emergency or an unplanned life-changing event.

Does your savings account need a boost? Then take a look at some of the most important facts and stats on saving in the UK and discover what you can do to ensure a financially stable future for you and your family. 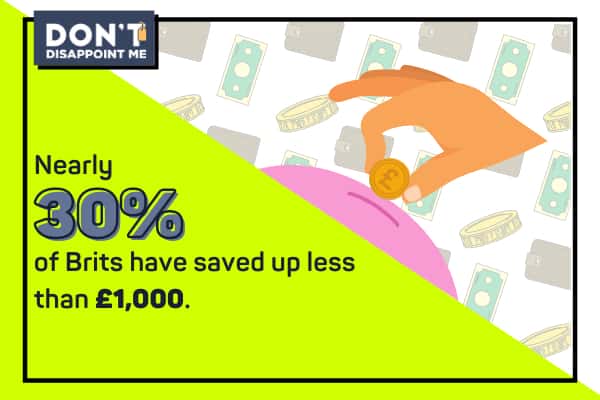 1. How much does the average person have in savings in the UK?

The average savings per person in the UK stood at £9,633 in 2020. According to Raisin’s survey of more than 2,000 Brits, the total average amount of savings in the UK was £35,361.09; however, the average, i.e. excluding the biggest and lowest savers, amounted to slightly over 9 thousand pounds per individual.

While most Brits try to save every chance they get, there are those that can barely get through the month on their income alone. As a result, 6.50% of the Brits surveyed by Raisin reported that they had no savings at all, while another 25.95% had less than £1,000 saved.

3. 21% of UK residents rarely or never save on a daily basis.

(Financial Capability Strategy for the UK)

A 2018 survey examining the financial capability of British people came to some shocking conclusions. Namely, the study discovered that 22% of respondents had less than £100 in savings and investments, and as many as 17% relied on credit card overdrafts and loans to pay for essentials, such as food and bills. No wonder 21% of Brits almost never put money aside on a day-to-day basis.

Like other things in life, the savings ratio, i.e. the average household savings in the UK as a share of disposable income, was also affected by the coronavirus pandemic.

More specifically, data from the Office of National Statistics reveals that:

(The House of Commons Library)

Despite the interest rate going down to an all-time low, bank deposits still increased by £44.6 billion in the second quarter of 2020. Reduced expenditure on non-essential items combined with growing financial insecurity during the lockdown has led Brits to deposit more in bank accounts as well as pay off debts and reduce borrowing. 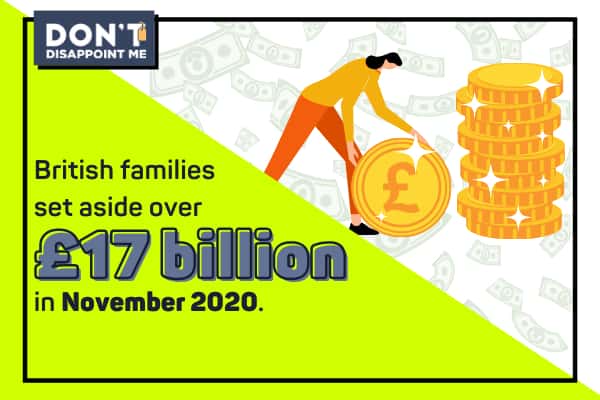 6. 28% of British households saved more because of the pandemic.

A recent government survey on the effects of the coronavirus on savings and deposits discovered that 28% of those surveyed had put away more during the pandemic. By contrast, the savings of 20% of interviewees were hit hard by the outbreak. As expected, the individuals whose savings grew in 2020 were somewhat unaffected by the economic crisis, i.e. they were not unemployed or furloughed.

7. Households collectively saved nearly £17.5 billion a month from May to June 2020.

(This is Money) (The Guardian)

If that wasn’t enough, British families also set aside another £17.6 billion in November 2020. Working from home alone has saved the average person £110 a week while cutting other expenses and scraping holidays abroad has allowed Brits to build quite the nest egg during the lockdown. What’s more, experts predict that these saving habits will continue well into 2021, enabling the nation to face rising unemployment levels with more confidence.

Nevertheless, data on average household savings in the UK show over a third had not succeeded in saving any money since the lockdown started causing 53% of Brits to worry that they might run out of savings.

8. The average UK resident saved about £2,879 during the first 13 weeks of quarantine.

The biggest reserves were built up from retail therapy, with British households saving an average of £34.39 a week on clothes purchases. They also saved £34.14 on car expenses and £33.57 on meals out. Cancelled hair appointments and cosmetic treatments helped Brits save around £25 a week while avoiding work lunches and coffee on the go put another £21 into their weekly reserves.

9. Londoners increased their average savings by missing a few visits to the local pub.

Brits across the country managed to save around £27 a week by not going out for a pint during the first lockdown. Staying at home instead of nipping down to the pub saved people in London considerably more—an average of £39 a week.

10. 36% of pensioners had increased their savings during the lockdown.

Apart from people with more disposable income, the savings of retirees also increased as a result of the coronavirus outbreak. Over a third of pensioners in the UK boosted their savings compared to just 13%, whose reserves dwindled in 2020.

11. Just 10% of the households that accumulated savings during the pandemic will spend their money.

On the other hand, 70% plan to deposit savings in their bank account. The rest intend to use the extra money to invest in some favourable opportunity, top-up their pension pots, or pay off debts.

Stats and Facts on Average Savings in the UK 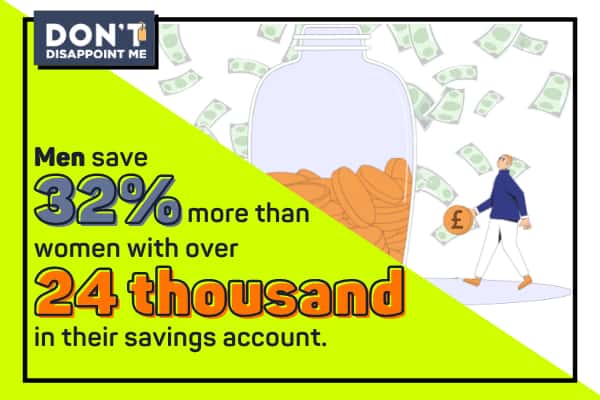 The latest consumer study by VoucherCodes shows the average British man to have £24,880 in savings or 32% more than the average woman who has put away £8,038. The gender difference is most evident among millennials, with men from this generation having 60% more in savings than their female counterparts.

This difference is not that surprising, considering there is a 17.3% gender pay gap in the UK right now. What’s more, women are more likely to be in debt, which naturally affects their ability to save and invest.

13. Younger generations have the least amount of money saved.

In the UK, people between the ages of 16 and 24 are the worst savers, having stockpiled only £2,481 in average savings. This age group is also the most likely to be without any financial backup for the future—as many as 10.83% of them have no savings at all.

14. Low-income households have around £95 in savings.

Lower-income British families have less than £100 in savings, while those with higher earnings have put away an average of  £62,885. The gap in average savings by income in the UK has become even wider in the wake of the ongoing pandemic. In 2020, 42% of high-income households saved more during the Covid-19 pandemic as opposed to just 22% of low-income families who did the same.

Somewhat unexpectedly, the residents of the capital reported the highest amount in savings—almost twice as much as the West Midlands, the second-ranked region.

2020 saving statistics put the East Midlands on the other end of the spectrum—average UK savings in this region stood at £6,438.

Seen by countries, data on personal savings shows the following:

Most Common Savings Accounts in the UK 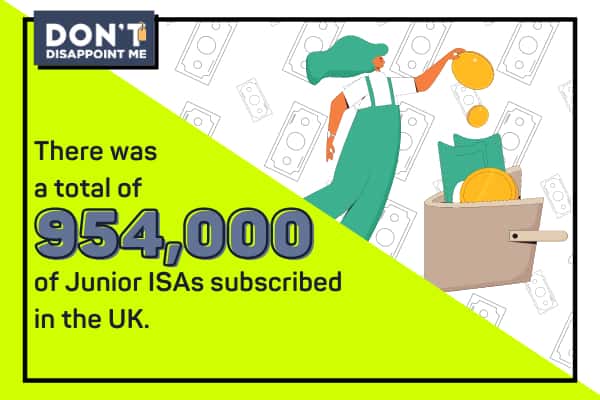 16. ISAs are the most popular type of savings account in the UK.

These tax-free savings accounts are by far the most common way for Brits to set money aside for a rainy day. There are four major types of ISA, including cash savings (the most popular), stocks and shares and the newly-introduced innovative finance ISA and Lifetime ISA.

Up by 1.1 million, the number of Adult ISAs stood at 11.2 million for the 2018/2019 financial year. Judging by reports on average UK personal savings, the amount subscribed to an Adult ISA was estimated at £6,049, bringing the total amount invested to £67,516 million.

Cash savings have made a comeback in the 2018/2019 financial year, with cash ISAs increasing by 1.4 million accounts to reach nearly 8.5 million.

Although the number of subscribers to this type of ISA is far from the 12.3 million recorded in 2008/2009, the average cash savings in the UK have increased considerably. Namely, Brits invested an average of £5,187 in a cash ISA in 2019, up from £2,483 a decade earlier.

Despite the early surge in popularity, a recent decline in the number of stocks and shares ISAs has been noted. More specifically, there was a 16% drop in subscriptions in 2019, going down from 2.9 to 2.4 million over the course of one year. Average values per account also reduced from £9,685 to £9,331 during the same period.

Lifetime ISAs have been slowly gaining in popularity. Namely, the number of Lifetime ISAs increased from 154 thousand to 223,000 in just one year since their introduction. The average savings per account was £2,709 in 2019, or 2,000 pounds less than the subscription limit of £4,000 a year.

21. The number of Junior ISAs is on the rise.

22. The number of ISA holders and the amount they have saved varies according to age and income.

Official government data on ISA holders according to gender, age and region report: 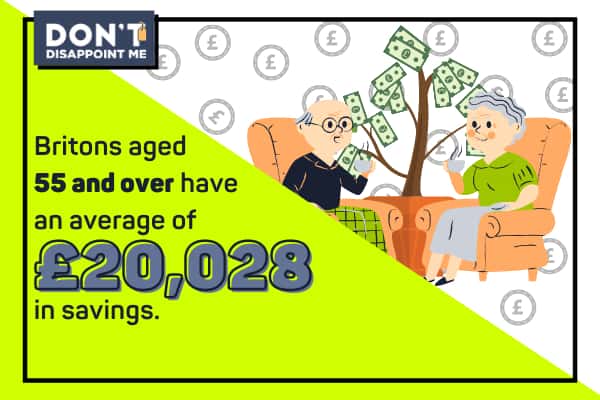 Judging by savings statistics curated by Rasin, most of the UK senior population is not ready for retirement. It’s estimated that Britons aged 55 and over have an average of £20,028 in savings, which is £8,000 less than the average salary of a full-time worker. What’s more, a quarter of 45 to 54 year-olds have just £1,000 or less in savings.

Even though these figures don’t include other assets, such as investments and property, they do show that many of the UK’s older adults are not financially prepared for retirement.

24. The average pension pot in the UK is about £50 thousand.

A couple expecting a comfortable retirement with an annual pension income of £26,000 will need a pension pot of almost £210,000. This is, however, under the assumption that they both retire at State Pension age, i.e. 66 years, choose an annuity, and receive the full State Pension, which is currently valued at £179.60 a week.

To reach this goal, an average 30-year-old should start setting aside £198 a month.

26. Brits are saving less for retirement, but more people actively contribute to their pension pot.

In the 2017/2018 tax year, UK residents made an average pension contribution of £2,700, slightly lower than the £2,900 recorded the previous year. The number of people actively making contributions, though, has increased to 10.4 million, or a million more since 2016/2017. This means that the increasing number of pension scheme participants has lowered the average annual contribution, resulting in employees putting less in their pension pots every year.

As of April 2019, the total minimum contribution into a pension scheme is 8% of earnings, 3% of which is provided by the employer, and 5% by the worker.

How Much Savings Should I Have Before I Retire?

It may be the question on everyone’s mind, but as these stats and facts on average savings in the UK show, the answer is not that simple.

That said, there are some things you can do to ensure a comfortable retirement. Consider your annual income and expenses to devise a plan on how to make the most of your salary. Consult a financial advisor if necessary. Make smart investments in an effort to boost your nest egg. And above all, always have a little something stashed away, just in case!