22 Personal Loan Statistics in the UK Everyone Should Know

Did you know that just a few Brits have money on hand to pay for significant purchases upfront? That’s why it’s not unusual to use personal loans to pay for home renovations, medical bills, consolidate debt or even plan the wedding of your dreams.

But what exactly is an unsecured loan? Will it help me save on interest? Or will it get me more into debt?

To answer all your questions, we compiled some personal loan statistics in the UK that will help you manage your finances. 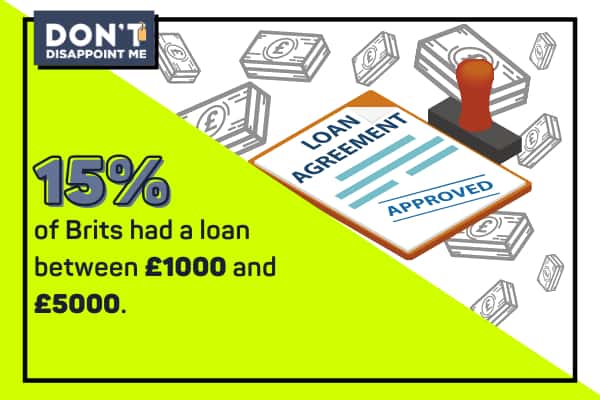 If you think you are alone in borrowing money, think again. In 2017 alone, around 39.6 million Brits had some kind of consumer credit or loan. From these, 31.6 million had a credit card, and 6.3 million had taken out an unsecured loan. Furthermore, 12.9 million had an overdraft on their accounts, while 3.1 million were stuck with a high-cost loan.

And that’s not all! 3.6 million people living in the UK have borrowed money from friends or family, whereas another hundred thousand have taken out a loan from an unregistered lender.

A Statista survey reveals that more than half of respondents had personal loans in the UK valued between five and twenty thousand British pounds. It seems that credits with lower value are less popular as only 3% of the participants in the same survey had borrowed less than £1000, while 15% had a loan between £1000 and £5000.

3. The number of personal loan products in the UK has declined since the start of 2020.

4. How many personal loans can you have in the UK?

British residents can apply for more than one personal loan, even in some cases from the same lender. Alternatively, they could secure a loan from multiple lenders. However, borrowers should be aware that taking out several personal loans at the same time can have a negative impact on their credit score and damage chances of securing a loan in the future.

The amount one can borrow depends on a personal credit check, needs and income. The credit score, in particular, can determine how much one can borrow and how high the interest rate will be. In the UK, personal loans usually start at £1000 and can go up to £25.000.

If you’re wondering how long do personal loans take to process, the answer once again depends on the client’s credit score and history, as well as the lender and their conditions. Sometimes a loan is approved right on the spot; however, in some cases, the procedure can take up to 5 working days.

6. 28% of personal loan applicants wanted to borrow half of their annual income.

7. Corby in the East Midlands has the highest number of personal loan applications in the country.

With 75.5 personal loan inquiries, or 47% higher than the rest of the UK, Corby has the biggest rate of loan applicants. Personal loan statistics in the UK indicate this town in the East Midlands is followed by Hatton in the North West and Flintshire in Wales.

There are many reasons why people opt for personal lending. Surveys show the following:

9. The UK unsecured lending market contributes about £23 billion to the economy every year.

As seen above, personal loans are taken out for various reasons. However, the money usually goes back to local economies across the country, driving growth among communities and businesses. Thus, it is estimated that the country’s personal loans industry annually contributes approximately £23 billion to the UK economy. 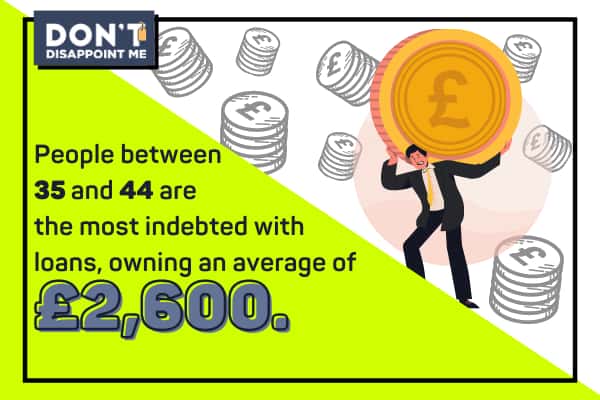 (The Office for National Statistics) (BBC)

The latest estimates show that total household debt in Britain stands at £1.28 trillion, 91% of which is property debt. Financial debt, amounting to £119 billion, is the second largest segment.

Data from the Office of National Statistics further reveals that the UK’s financial debt has increased by 11%, or by 12 billion pounds from the £107 billion a few years back, primarily fueled by an increase in student loans and hire purchase debt.

In the third quarter of 2019, unsecured household debt reached record highs, going up to £14,540 or £430 more compared to the previous year. In the same period, total unsecured borrowing increased to a staggering £407 billion. This is the highest amount of unsecured debt recorded so far, even higher than the £286 billion registered at the peak of the 2008 financial crisis.

When it comes to debt to income ratio, statistics paint a grim picture. Two years ago, the TUC estimates, personal debt accounted for 27.5% of total household earnings—almost as much as it did at the height of the financial recession.

13. The younger population has the highest amount of personal loan debt.

People between 35 and 44 are most indebted with loans, owing an average of £2.600. The amount of debt in personal unsecured loans in the UK, however, goes down with age. Thus, those in the 65 to 74 age group owed an average of £670, whereas people aged 75+ had the lowest debt by age with an average of £240.

14. People in Wales are more likely to owe money in personal loans.

Scottish clients owed more in personal loan debt (the average was £7,241 in 2019); however, the percentage of borrowers was lower than Wales—51% of StepChange’s clients in Scotland had a personal loan. 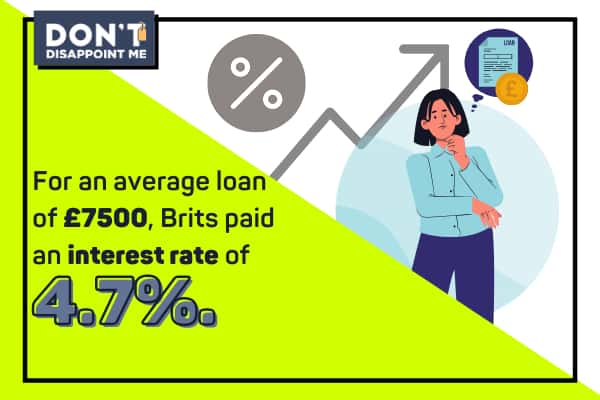 The average loan interest rate in the UK has been on the rise since the start of 2020, going down slightly in the second quarter before spiking again in August.

A closer look at the data shows that:

In addition to the average interest rate, borrowers should also consider the loan’s annual percentage rate and choose a lender accordingly.

So, which bank has the lowest average loan APR in the UK?

According to Moneyfacts, Tesco Bank offers the lowest interest rate on personal loans worth £5,000 (payable over three years). On the other end of the spectrum is Santander, providing an APR of 4.5%.

In terms of higher-value loans, cahoot has the lowest interest rates on £7,500 loans—2.8%, while Hitachi Personal Finance has the highest at 3.3%.

Paying off Personal Loans in the UK 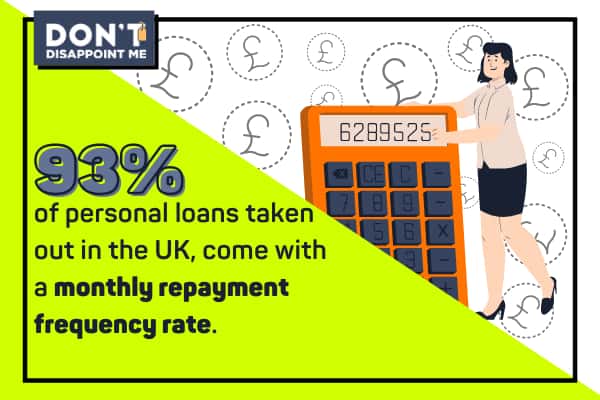 Personal loans in the UK are usually repaid between one and five years. Borrowers take out a fixed amount typically repaid in monthly payments, generally ranging from one to five years, although some lenders offer a repayment period of ten years and longer.

18. Most Britons choose to pay off their personal loans at a monthly rate.

Almost all, or 93%, of personal loans taken out in the UK, come with a monthly repayment frequency rate. On the other hand, only 3% came with a single repayment required. 2% were repaid weekly, and just one per cent of borrowers made repayments every four weeks.

To help people struggling with finances amid the coronavirus crisis, lenders have issued nearly 1.6 million payment holidays on credit cards and personal unsecured loans in the UK. More specifically, UK Finance members gave 608.000 payment holidays on personal loan payments, which is an increase of a whopping 30% from the start of May 2020.

How Much Do Brits Know About the Personal Loans Market 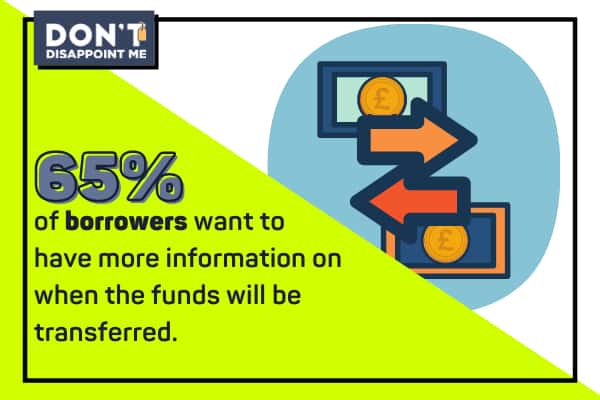 20. Borrowers could save up to £400 million a year by shopping around for the best deals on loans.

It seems that UK residents do not have the complete picture when it comes to the UK unsecured lending market. Surveys reveal that 40% of people who have applied for a loan didn’t know their lender carried out a credit check as soon as they made inquiries, resulting in a mark on their credit score.

21. 39% of borrowers who had received a personal loan were not sure if they were entitled to a repayment holiday.

On top of that, personal loan statistics demonstrate that 27% did not know if they could make overpayments or not, whereas another 27% were not aware that they would get an Early Repayment Charge if they paid off their loan sooner than expected.

22. 78% of people who have a personal loan want more transparency from their lenders.

A large share of borrowers want providers to be more open in terms of fees and charges, and 10% would like more clarity on the interest rates offered. Another 65% want to have more information on when the funds will be transferred, and 61% are asking for greater transparency regarding the number of applicants who get the advertised interest rate for a loan.

Taking a personal loan is definitely a cost-effective option if you want to get extra funding. But before signing on the dotted line, it’s always wise to compare the personal loan statistics in the UK  as well as offers by various providers, interest rates, extra fees and all other charges. This way, you can compare the benefits and drawbacks of different lenders and make the best possible decision for your budget.