33 Insightful Investment Statistics in the UK

Almost everyone who likes to plan wants to invest in something worth their money, dedication, and time.

But what should you invest in? How soon will you see returns? Who is investing and saving in Britain?

We have the answers. Here you’ll find the most important investment statistics in the UK that will help you make the most of your money. 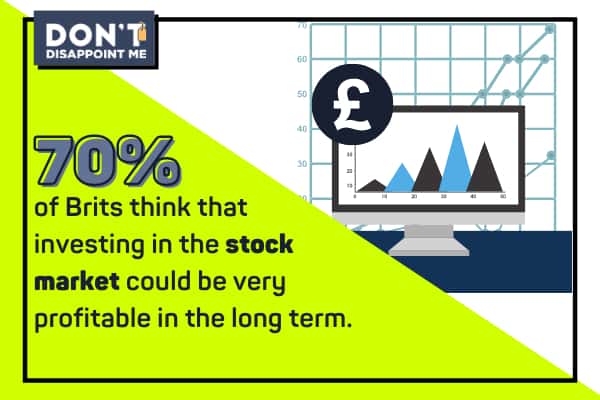 What are some of the most popular ways to invest in the UK? Tech companies, of course! In 2018 alone, 11.864 new tech companies were opened in the UK, which is 14% more than the previous year. On top of that, the UK’s new software companies attracted 5% of the global technology scale-up investments, higher than other countries in Europe.

3. Investing in stocks and shares can produce higher returns than cash in 90% of the cases.

Investing is not just about getting returns; many are doing it for the emotional benefits as well. Thus, 74% of respondents in a survey reported they got a “buzz” from seeing a return on their investment, while 35% and 31% said they were feeling satisfied and secure, respectively.

4. What are the most popular ways to invest in the UK?

Apart from stocks and tech companies, Brits have other investment options at their disposal, such as pensions (workplace and personal), investment bonds, and property investments.

Property, on the other hand, can be a very lucrative personal investment, statistics show. In December 2019, the number of buy-to-let mortgages increased by 3.6%, while estimates show that landlords can earn up to £8,400 a year in rental yields alone.

Stats and Facts on Stocks and Shares ISA in the UK 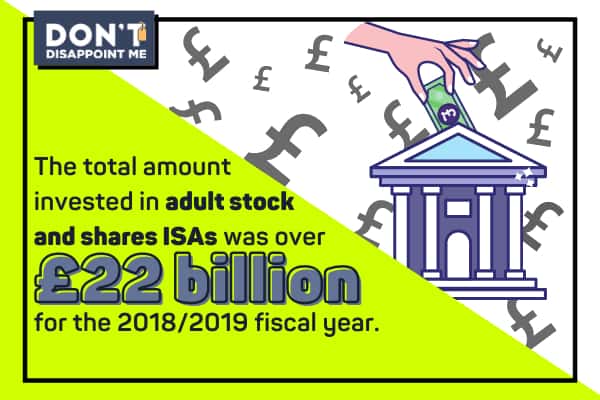 2.2 million British people held stock and shares ISAs (Individual Savings Accounts) in 2019. This number can seem impressive; however, considering that there are over 66 million people living in the UK, it is not a lot. To be more precise, this is only 3% of the UK population or 1 in 30 Brits.

Individuals looking to invest their money into a stocks and shares ISA can contribute a maximum of £20,000, investment statistics from 2021 inform. This limit applies to all ISA accounts an individual may have. Since Brits are allowed to hold more than one type of ISA, they can split up the allowance and contribute to any of the four available individual savings accounts.

This means that a monthly investment of £25 in a stocks and shares ISA would generate savings of £11,951 over a period of 25 years. However, savers and investors should be aware that the average rate of 5.14% is just that—an average rate, meaning that past performances do not guarantee future returns.

11. Fidelity Worldwide Investment manages the biggest number of ISA funds in the UK.

As of July 2019, Fidelity Worldwide Investment managed funds valued at over £9 million, making it the UK’s biggest fund management company. It is followed by Legal & General (Unit Trust Managers) Limited, managing funds worth over £7 million, and HBOS Investment Fund Managers Limited, which is in charge of funds valued at more than £6 million.

Who Invests in the UK? 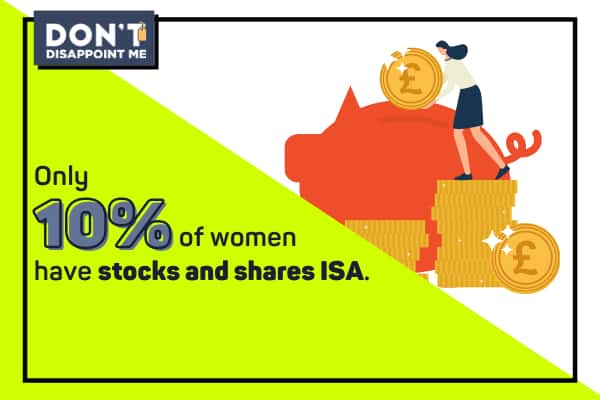 Who is willing to invest more in the UK? Men or women?

UK investment statistics say it is the former as 17% of men have a stocks and shares ISA, compared to just 10% of women.

Why are women reluctant to invest? Perhaps these stats will provide some insight:

13. 75% of young people in the UK have invested or are considering investing.

The generation most likely to consider investing in stocks in the UK is young people aged 23-38. More specifically, three-quarters of millennials and Gen Z stated that they were planning to invest in the following year. On the other hand, the number of likely investors goes down with age as 60% of boomers, and 41% of the Silent Generation are willing to invest.

14. Over 25% of millennials and Gen Z are encouraged to invest by the coronavirus market crisis.

The initial coronavirus crash that hit markets in March 2020 has actually inspired over a quarter of young adults in Britain to invest. These generations are also more likely to invest in struggling firms on account of lower share prices. Investment facts from the UK show that due to the COVID-19 market crisis, there is now a fair share of companies to pick from. 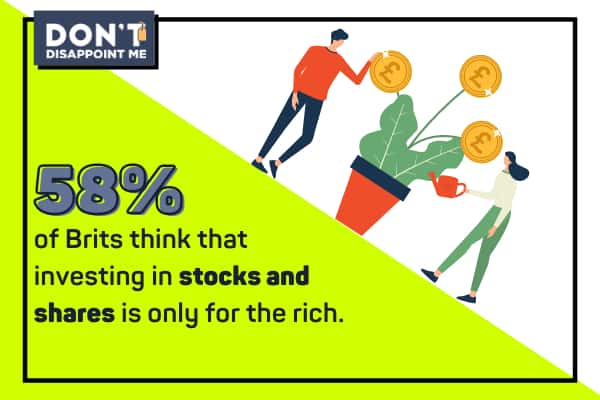 The worldwide financial crisis from 2008 left many countries, the UK included, with high inflation and high unemployment rates. People tend to remember things like that, thus the fear of investing.

Although the situation has since stabilized, 66% of people living in the UK still won’t invest or do anything that might put their hard-earned capital at risk, while 58% believe that investing in stocks and shares is only for the rich.

16. 39% of the UK population are not confident in managing their finances, investment in the UK statistics reveal.

39% of the UK population are not confident in managing their finances, which is probably why 22% have less than £100 in savings and/or investments. What’s more, 47% of Brits don’t feel confident when it comes to making financial decisions about products and services.

17. 59% of the UK population who don’t invest still put finance-managing as their top priority.

It’s not that Brits aren’t interested in managing their finances. In fact, finance-managing is still the top priority to 59% of the UK population that doesn’t invest. 27% of Brits would even prioritize it before booking a holiday. 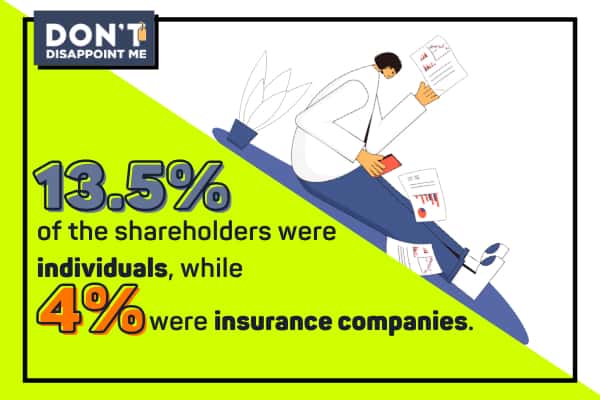 Over half of the shares on the UK market are held by foreign inventors. When it comes to other shareholders, data from the Office for National Statistics reveals the following:

How many retail investors in the UK are interested in domestic equity funds?

20. Investors own their shares for about 0.8 years before deciding to sell them.

The stock market changes a lot over time, and so does investor’s behaviour. Today, investors in possession of UK stocks keep them for about 0.8 years before deciding to sell them. 40 years ago, it was a different situation. Back then, investors kept their shares for about 9.7 years before selling them.

21. As of January 2021, the market value of companies trading on the London Stock Exchange was £3.59 trillion.

The market value of companies trading on the London Stock Exchange was hit hard by the coronavirus crisis, particularly in March 2020. Namely, between December 2019 and March 2020, the London Stock Exchange market value went down from £3.925 billion to £3.00 billion. This drop of a staggering 900 billion was primarily due to the massive sell-off of shares caused by coronavirus-induced recession fears. 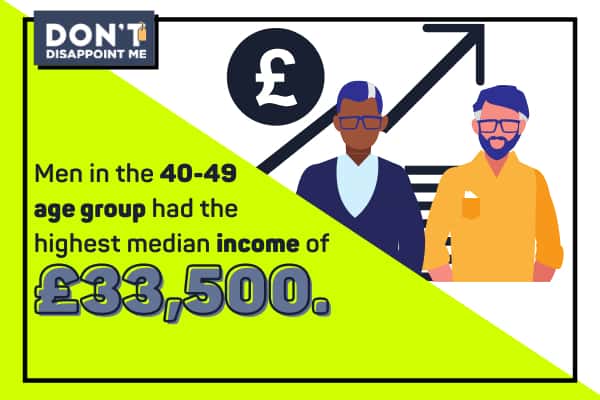 However, this trend was not meant to last. Annual pay growth reduced by 1.3% in May 2020, which experts believe will most likely bring on a downward trajectory affecting income growth rates in 2021.

24. British men have a higher median income than women.

According to 2020 UK personal savings statistics, the average Brit has £9,633.30 in savings. Although this might seem like a suitable nest egg, it’s actually not that high when compared to living expenses and annual income. Even more concerning, 25.95% of UK adults have less than £1,000 in savings, and 6.50% have no savings at all.

26. Higher wealth deciles hold most of the UK’s total wealth.

When it comes to the distribution of personal wealth, statistics clearly point to inequalities across the richest and poorest groups in the UK. Thus, in 2018, the top three wealth deciles held 76% of total wealth in the UK, whereas the bottom three held only 2%.

27. The average individual in the UK is around £30 thousand in debt.

According to research by the Money Charity, as of November 2020, the average debt per UK household was £60,720.  Estimated per individual, the typical Brit owes £31,940, which is about 108% of average earnings. 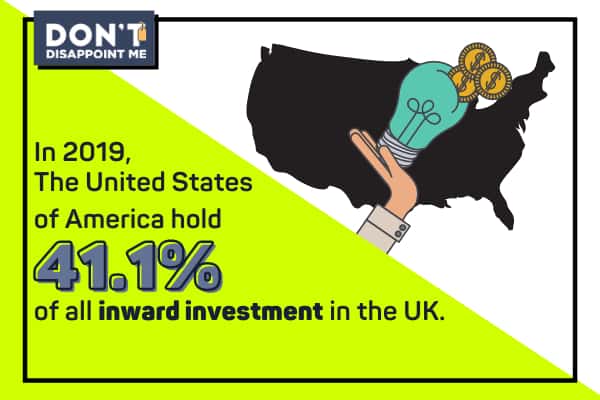 Inward flows of direct investments into the country stood at £35.6 billion in 2019, a drastic decline compared to 4 years ago when the value of foreign direct investment into the UK was £192.0 billion. Inward FDI has been on the decline for some time now, going down to just 2% of the country’s GDP in 2019.

29. The USA is the biggest foreign investor in the country.

Unsurprisingly, the main investor in the UK is the United States of America, holding the majority, or  41.1% of all inward investment in 2019. Further data on foreign direct investments by country show that France is second, accounting for £7.2 billion, or 20.4% of inward flows, followed by the Netherlands (19.5%) and Germany (16.9%).

Nearly a third of all UK investments go to the USA, much higher than other countries. To compare, France gets 9% of the UK’s investments (or three times less than the USA), Germany receives 7%, and the Netherlands is in third place with 6%. Japan and Luxembourg round off the top five destinations for UK investments with 5 and 3%, respectively.

Nevertheless, this increase is much lower than the estimated 14.5% growth in Q3 of 2020. Furthermore, business investments in the country witnessed a 10.3 year-on-year decrease, going down by 10.7% throughout 2020.

32. The coronavirus pandemic had a negative impact on the flows of equity investments into private businesses in the UK.

According to private investment statistics in the UK, in the first quarter of 2020, there were only 334 announced equity deals in private companies. This is significantly lower than in 2019, or a decrease of 32%, to be more precise.

Furthermore, in March 2020, there were only 95 deals announced. These deals totalled £595 million, a drastic decrease compared to one year earlier when equity deals into private companies were valued at £1.46 billion.

GFCF, also known as gross domestic fixed investment, applies to all land improvements, including the construction of roads, as well as commercial, industrial buildings, and private dwellings. It also encompasses plants, machinery and the purchase of equipment.

In terms of volume, GFCF increased by 2.1% from Q3 to Q4 in 2020, with transport equipment making the biggest positive contribution.

Putting money aside or investing it is not always easy, and there are many factors to consider, as we can clearly see in the investment statistics from the UK listed above. Only by having the full picture can you make an informed and wise decision that will help you turn your modest income into a nice stockpile for the future.