30 Cryptocurrency Statistics in the UK to Help You Cash In

Are you sick and tired of that one friend who’s always telling you that cryptocurrencies are the future and that you can’t miss out on such a lucrative investment opportunity? Well, they might just be onto something since currently, over 2 million Brits own cryptocurrencies.

So, if you want to get in on the action and decipher the crypto world, keep reading for the latest cryptocurrency statistics in the UK and see what all the fuss is about. Let’s dig in!

Invaluable Cryptocurrency Facts and Stats for 2021 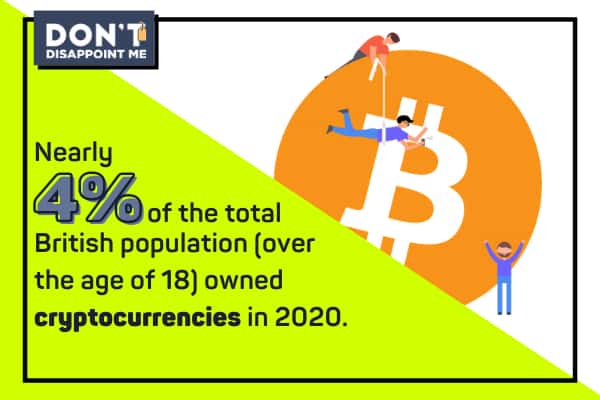 1. Nearly 2 million adults in the UK owned cryptocurrencies in 2020.

Cryptocurrency statistics in the UK showed that in 2020, around 1.9 million British adults owned cryptoassets, amounting to 3.86% of the country’s total population over 18 years of age.

2. How many people use Bitcoin?

A 2019 survey by CryptoRadar of over 2,500 adults across the UK revealed that around 5.3% of them owned Bitcoin. Further, these Bitcoin stats tell us that 6.8% of the respondents didn’t own a cryptocurrency but intended to buy some.

The percentage of individuals who held or had held cryptocurrencies in 2020 was 5.35%, up 2.35% year-over-year. This sole fact means there are approximately 2.6 million Britons who have bought cryptocurrencies, an increase of around 1.1 million from the previous year.

4. 57% of cryptocurrency owners bought just one type of it.

A 2019 survey by the Financial Conduct Authority (FCA) on cryptocurrency ownership revealed that 51% of UK cryptoasset holders had opted to purchase Bitcoin. Brits also gravitated towards Ethereum with 34% and Litecoin, Bitcoin Cash and XRP (Ripple) with 20% each, rounding off the top five most popular cryptocurrencies.

Knowing that Bitcoin is the largest cryptocurrency right now, it comes as no surprise that nearly four-fifths of Britons had heard of it in a 2020 survey. Interestingly, even though it’s yet to launch, Libra was the second most common cryptocurrency people knew about with 22%, while Bitcoin Cash came in third with 20%.

6. Nearly half of cryptocurrency owners say they bought it as a gamble.

Recent FCA cryptocurrency statistics in the UK from 2020 demonstrate that 47% of UK cryptoasset holders purchased it in an attempt to make (or lose) some money. However, a quarter bought it as part of building an investment portfolio. In turn, 22% didn’t want to miss out on the chance to buy some, while 17% did so as part of a long-term savings plan.

7. Approximately two-thirds of ad-influenced cryptocurrency owners were mistaken about its protection by regulations.

In addition to these 65%, 61% of consumers who were convinced to purchase cryptocurrencies by advertisements in 2020 experienced buyer’s remorse, while over half (53%) had wrongly defined what cryptoassets were. Nevertheless, 85% of crypto owners didn’t regret buying it at all.

Half of the respondents in a 2020 survey said that the value of their UK crypto wallet was £260 or less. This group of crypto owners also tended to come from a more affluent household. Nine out of ten disclosed holdings no higher than £4,300.

9. Only 5% of British crypto owners who bought it online did so exclusively on UK-based exchanges.

According to the same 2020 FCA survey, 77% of respondents had bought cryptocurrencies through an online exchange. In addition, 12% of them had used both UK and non-UK based cryptoasset trading platforms, while 83% had used solely non-UK based ones.

Fewer than one in ten surveyed cryptoasset owners had purchased it only using borrowed money, mostly from financial firms, friends and family and other sources or put it on their credit card. This would correspond to a total of 215,000 people, half of whom had acquired less than £120 worth of crypto. Nevertheless, the overwhelming majority or 91% of respondents had used their own money to purchase a cryptocurrency.

11. Almost half of cryptocurrency owners have never used it.

An FCA study revealed that 47% of cryptocurrency users had never made use of it. However, 27% of them had purchased goods and services with it, 25% had exchanged it for other cryptoassets, whereas 12% had traded it for other financial products.

12. Some 500 shops and bars across the UK accept Bitcoin as a payment method.

Cryptocurrencies remain a niche means of exchange since as of 2020, you can only spend Bitcoin at approximately 500 indie shops, bars and cafes across the UK. Unfortunately, none of the major high street companies or online retailers accept any of the vast number of cryptocurrencies. It’s no surprise, then, that so many people still think of crypto as funny money.

Around one in eight UK crypto owners kept an eye on their holdings’ value in 2020, whereas in 2019, that proportion was 35%. By contrast, the percentage of cryptocurrency holders who at the time of the survey monitored cryptocurrency exchange rates daily was 13% in 2020, down from 22% the year before.

14. Almost half of UK cryptocurrency owners store it at the exchange they bought it from.

According to cryptocurrency statistics in the UK, 46% of Britons who own any type of cryptoassets prefer to keep them at the same exchange from which they purchased them. However, 34% figured that the best thing to do was transfer them to a different crypto wallet (online), while 24% decided to store their cryptos offline.

15. In 2019, 27% of British residents reported knowing what cryptocurrency is.

The various regions across the United Kingdom reported different rates of basic cryptocurrency knowledge in 2019. For instance, around a third East Midlands, South East, Wales, East of England and Northern Ireland residents displayed awareness of crypto. Not so in Scotland, however, where no more than 20% of the population could define what a cryptocurrency is.

16. Over a fifth of Britons have never heard of cryptocurrencies.

Although more and more people are looking to purchase cryptocurrencies nowadays, nevertheless 20.3% of Brits had no idea what they were in 2019.

What’s curious is that 25.5% of males between the ages of 25 and 34 questioned in the same survey said that they’d never heard of them—the highest proportion in cryptocurrency demographics. 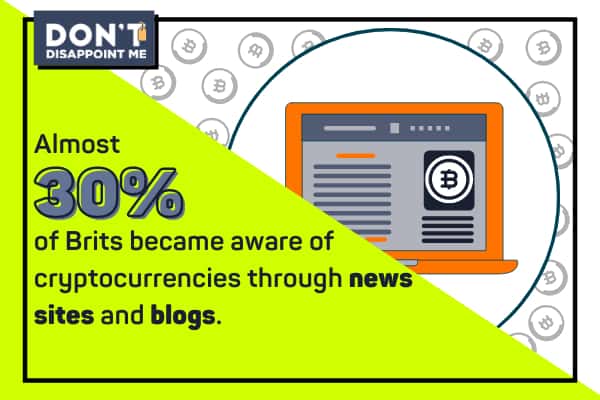 17. In 2020, 27% of UK residents learned of cryptocurrencies through traditional media.

There was an increase of 5% in cryptocurrency awareness through traditional media in 2020 from a year prior, primarily because of their increased presence on TV, in the papers and on the radio.

Another 27% of Britons became aware of cryptocurrencies through news sites and blogs, while 15% did so through social media platforms. Only 7% had seen an online ad about them.

18. 45% of current and former cryptocurrency owners had seen a crypto-related ad.

According to cryptocurrency statistics in the UK, 90% of users had done some form of research before buying it, a year-on-year increase of 6% over 2019. Further results showed that 8% had conducted in-depth research, but 16% hadn’t bothered to do any whatsoever. Moreover, 4% went in blind, looking into cryptoassets only after acquiring some. 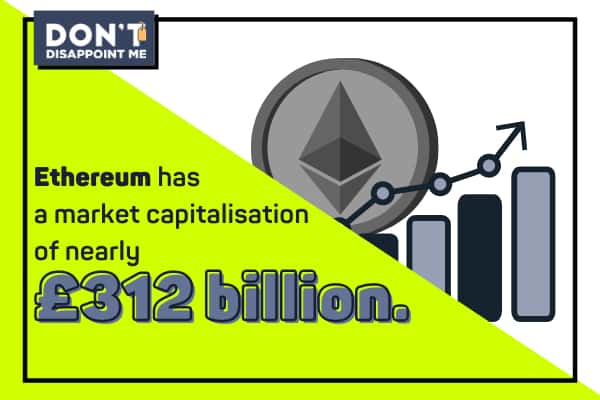 20. How many digital currencies are there?

There were nearly 5,400 different types of digital currency traded in 2020 alone, with their total market capitalisation being a staggering $201 billion. The top five most well-known cryptocurrencies globally at that time were Bitcoin, Ethereum, XRP, Tether and Bitcoin Cash.

21. Binance is the world’s largest crypto trader with nearly $50 billion in volume.

In the spring of 2021, Binance had a daily crypto trading volume of $49.31 billion, roughly double that of the runner-up exchange on the list, Upbit, which reached $24.63 billion. Huobi Global was third with a comparatively modest trading cryptocurrency volume of $19.31 billion.

As volatile as the crypto market can be, these last few years have shown a somewhat stable growth of cryptocurrency prices. Since 2016, among thousands of digital currencies, Bitcoin has been the one that’s really taken off. Namely, its price in October 2016 was only $693, but by March 2021, it was over $58,700 after prices started skyrocketing in September 2020.

23. Bitcoin accounts for about two-thirds of the total crypto market’s capitalisation.

In 2020, Bitcoin had a 66% cryptocurrency market share in terms of capitalisation, up from 53% the year prior and 48% in 2018. However, these figures are far from its peak in 2015, when it reigned supreme on the crypto market, with a staggering 86% of the total cap.

Bitcoin has the highest cryptocurrency market cap—no doubt about it. There are, however, smaller “giants” on the crypto market as well—there’s Ethereum with a market capitalisation of £311.90 billion and Binance Coin with £65.59 billion.

25. Who are the actors in the cryptoasset market?

In the ever-evolving world of cryptocurrencies, there are nevertheless a number of constant actors that keep it going. These include:

The Impact of Cryptoassets 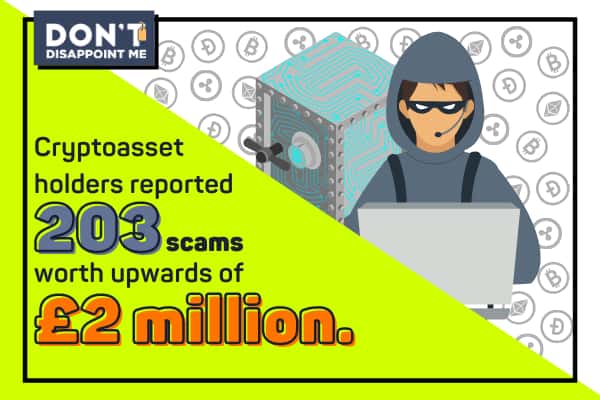 26. What are the benefits of using crypto?

An FCA report from 2018 looked into the potential positive impact cryptocurrencies could have when used in particular ways, namely as a means of exchange, for investment, and as a capital-raising tool. It reached the conclusion that, unfortunately, the overall risks outweighed the benefits at the time.

27. Cryptocurrency ICOs used as a capital-raising tool have the highest potential benefits.

28. What are the risks of using cryptocurrencies?

In the same way that there are benefits, there are also many risks that go hand in hand with using cryptoassets. Some of them include:

29. Over half a billion dollars were lost to cryptocurrency theft in 2020.

A recent Statista survey revealed a drastic decrease in cryptocurrency theft and hacking in 2019 and 2020 from 2018, when crypto-related theft caused losses to the tune of $950 million. However, cryptoasset theft was almost half that in 2020, amounting to a relatively moderate $513 million worldwide.

Nevertheless, fraud and cybercrime risks exist. In the UK, in June-July 2018 alone, cryptoasset holders reported 203 scams worth upwards of £2 million or an average of over £10,000 per case. Therefore, if you’re wondering which cryptocurrency to buy, be very careful and do your research regarding the issuer.

Furthermore, a quarter of ICOs analysed in a study were suspected of being fraudulent, while 46% of those issued in 2017 had gone bust within a year. Scammers were found to use cold-calling or target victims over social media with get-rich-quick investment schemes.

What do you think? Is the crypto craze just a fad? Or are digital currencies the payment methods of the future? While it might be too early to tell just yet, we hope that these cryptocurrency statistics in the UK have taught you a lot about the cryptic world of mining Dogecoin and such.

If we’ve learned anything from Bitcoin stats, however, it’s that it’s best to jump on the bandwagon early and potentially set yourself up for a very comfortable retirement. Now that you have all this information, we’re sure that you can wade into the crypto-waters confidently and successfully.