Did you know that the average debt in the UK per adult is around 108% of earnings?

Debt is one of the major contributors, even perhaps the leading cause of everyday stress. As unemployment rates and financial insecurity are rising, we can’t help but wonder how grim the UK economy is? How many Brits are in debt and how much do they owe?

To provide you with the information you need, we put together some of the most relevant facts and figures on liabilities and debt in Great Britain. 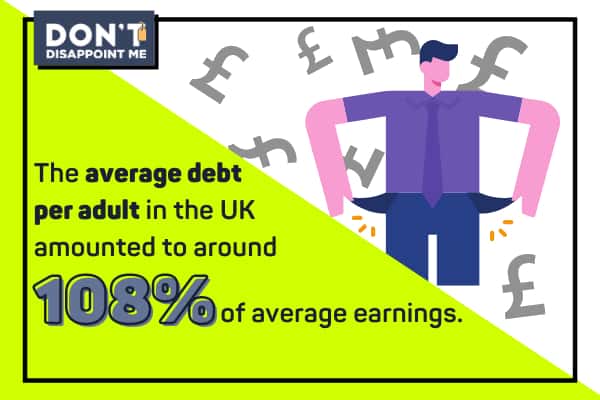 Calculated per individual, in November 2020, the average debt per adult in the UK amounted to £31,940, or around 108% of average earnings.

Compared to the same period the previous year, the average debt per household increased by £897. The amount of average debt per person was lower in 2019 as well (£31,485), but it made up a higher percentage of earnings (111.4%).

According to forecasts by the Office for Budget Responsibility, UK household debt will go up to £2.373 trillion in 2025, significantly higher than the total debt of £2.062 trillion recorded in 2020.

The latest UK personal debt statistics indicate that British people owed £1,692 billion by November 2020. Sadly, this is an increase of £21.6 billion compared to November 2019 when personal debt amounted to £1,671 billion.

4. Personal debt increased by more than £240 billion in just one decade.

In the last ten years, personal debt in Great Britain has drastically increased. To be precise, debt went up by roughly £241 billion from £1,451 billion in 2011, historical household debt statistics indicate.

Total net lending by British banks and building and loan associations made to British individuals increased by £3.77 billion in November 2020. According to revised data from the previous month, this is an increase of about £126 million per day.

Q2 2020 data on written-off loans reveals that the gross worth of these write-offs was £851 million. This might seem like a considerable amount of money, but it’s actually the second-lowest value to be written-off in a quarter. The highest was back in Q4 2014 when more than £3.6 billion in loans was written off by British banks and building and loan associations.

Reports indicate an increase in household debt to income ratio in the UK, meaning that British households had more debt than income. Even though the ratio stood at 128.5% in the second quarter of 2020, the rate of nonperforming loans in the UK is still relatively low.

8. Household debt in the UK rose to £6 billion because of the global pandemic.

Affecting 4.6 million households in the UK, the coronavirus pandemic has wreaked havoc upon the financial security and stability of citizens. A study carried out by StepChange on UK household debt statistics shows that in May 2020, the affected households had accumulated more than £6 billion in arrears and debt.

It’s not all bad news, though. Spurred by financial insecurity and forced to cut costs during lockdown, Brits were also able to save quite a lot during the initial stages of the pandemic. Thus, household bank deposits increased by £16.2 billion (three times higher than the average monthly increase), while families repaid £7.4 billion in credit card debt and personal loans.

Debt Demographics in the UK 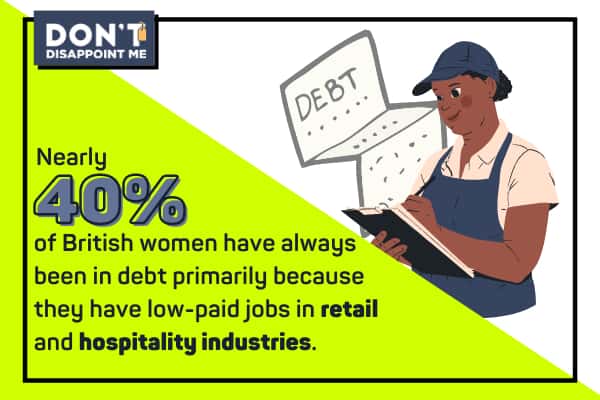 9. People between the ages of 35 and 44 have the highest amount of debt.

When we take a look at the average debt by age in the UK, we can see that Brits aged 35-44 had an average of over £2.6 thousand debt in loans, the highest of all age groups. Interestingly, older people, i.e. those over 75-years-old, had the lowest amount of debt — an average of only £240.

Reports on gender demographics imply that women have more trouble with debt. Nearly 40% of the women living in Great Britain have always been in debt primarily because they have low-paid jobs in the retail and hospitality industries.

11. Cities and towns in Wales and Northern England have the highest consumer debt.

People who live in Warrington, Swansea, Sunderland and Wigan had the highest ratio of debt to income, around 21% in 2018. Problem debt (when people are unable to pay their debt) is a big issue in these cities, as well as other towns that have lower wages and high welfare benefits.

12. Households that are less well-off have a higher percentage of debt. 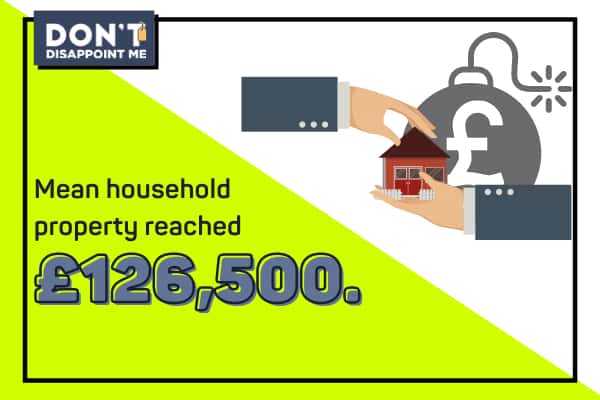 13. 9.2 million households in the UK have property debt.

From 2016 to 2018, total property debt increased to £1.16 trillion (or 91% of total household debt of £1.28 trillion) with over 9 million households facing this issue. The increase in property debt is mainly caused by more families taking out mortgages as well as the growth of the average levels of property debt. 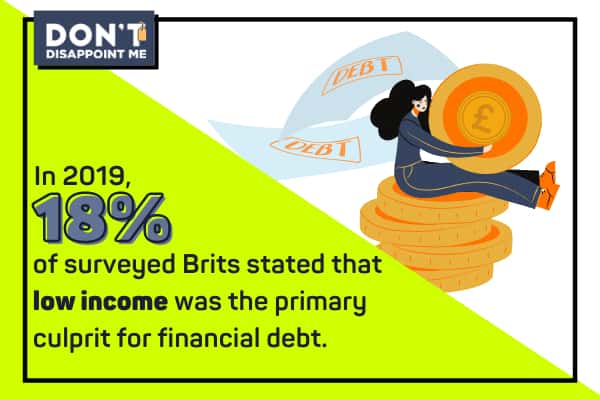 Going up by 30% to £25 billion, hire purchase debt was a real issue for 4.6 million households in the UK. Credit, store and charge card debt also increased between 2016 and 2018, although the growth was much lower —  this component of financial debt went up by 4% to £22 billion.

19. Reduced income is the main reason for having financial debt.

In 2019, 18% of surveyed Brits cited low income as the primary culprit for their financial debt. Also, 16% of them pointed to unemployment, while another 16% mentioned injury and illness as one of the top causes of debt in the UK.

Over half of the people aged 25-34 had some kind of financial debts, excluding mortgages, which is the highest among all other age groups. By contrast, 23% of British people from 16 to 24 and just 15% of those aged at least 65 were in financial debt. 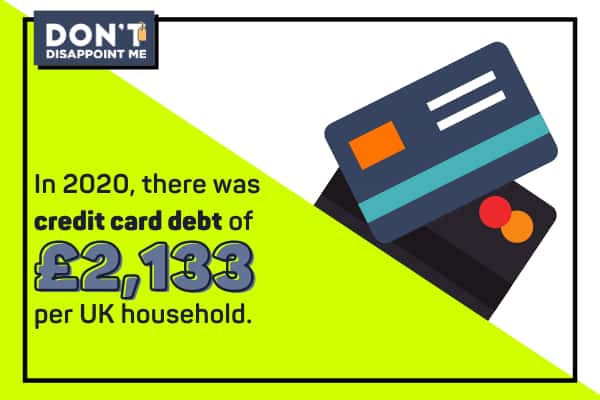 Representative rates on credit cards are much higher compared to other forms of lending, and they keep on increasing throughout the years. Thus, 2018 credit card debt statistics point to the average interest rate on credit cards coming to 18.26% only to rise to 20.65% two years later.

23. Credit card debt takes an average of 25 years and a month to repay. 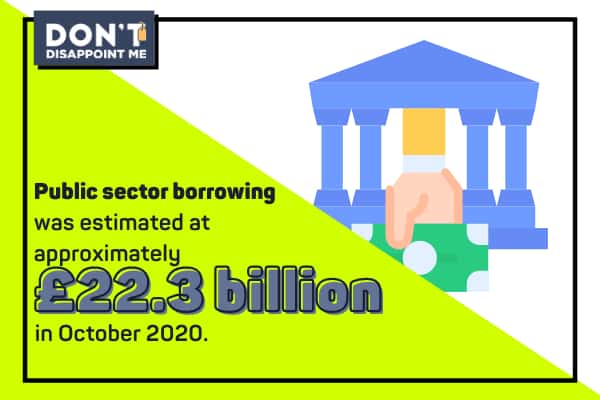 According to the Office for National Statistics, in just seven months, the total value of net public sector debt, excluding public sector banks, stood over £2,000 billion. Public sector borrowing, however, was estimated at approximately £22.3 billion in October 2020.

The amount of debt as a percentage of GDP in the UK reached over 100% last year. Interestingly, this was the highest ratio of debt to GDP the UK has ever seen since the early 1960s.

Net borrowing by the government in the first seven months of the fiscal year was around 9.9% of GDP, whereas gross UK government debt stood at 104.7% of GDP at the end of October last year.

26. Japan has a higher percentage of national debt than Great Britain.

Despite the crushing amount of national debt, the UK is not as bad as some other countries in the world. For instance, Japan’s national debt stands at 225% of GDP, and Italy’s is about 120% of the country’s gross domestic product. The US, on the other hand, has a lower national debt than the UK — 80% of GDP.

UK debt statistics for 2021 suggest that national debt could go up to £250 or even £350 billion, depending on how the coronavirus recession develops.

Government coronavirus support schemes will definitely increase public sector debt considering that the UK government has allocated loans of about £350 billion to businesses and offered to pay 80% of the annual salary to people made redundant by the coronavirus crisis.

In the past, the majority of the UK government debt was held by the private sector, i.e. insurance and pension funds. Today, the Bank of England holds around a quarter of the country’s public sector debt. Other banks and building societies have 9.30%, whereas overseas investors and insurance companies hold 30.7% and 23.10%, respectively.

Debt and Interest Payments in the UK 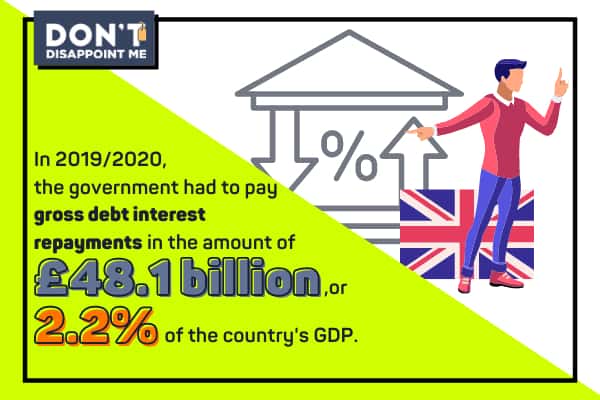 When weighing up the pros and cons of borrowing money, the UK debt interest payments is one of the most important factors to consider. As of 2020, the Bank of England has set the base rate, or bank rate, at 0.1%.

Figures from October 2020 indicate that the total annual interest payments on Brits’ personal debt would reach £44,964 million, or around £123 million per day. In terms of households, annual interest repayments could amount to £1,613, or £849 per person.

31. The government spent close to £40 billion on interest payments.

Problem Debt Statistics in the UK 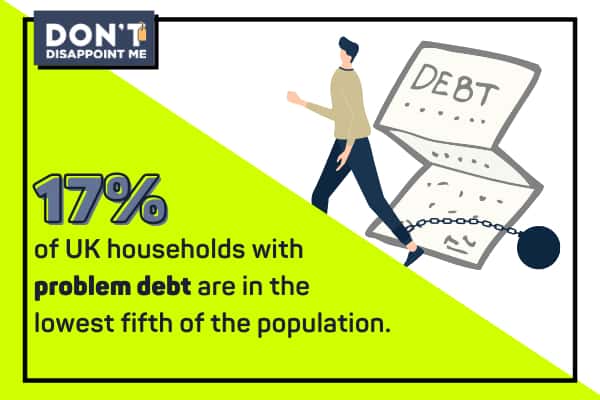 32. 7% of British households had problem debt.

According to debt statistics from 2018/19, an average of 7% of UK households had a debt that they couldn’t pay. Moreover, 17% of the households with problem debt are in the lowest fifth, and only 1% are in the wealthiest fifth of the population.

33. 14% of British adults see their financial debt as a heavy burden.

7% of households with property debt saw it as a “heavy burden, while 30% thought of their debt as “somewhat of a burden”. Regarding financial debt and individuals, 14% of adults with this kind of debt considered it as a “heavy burden” and had problems with debt management.

In October 2020 there were more than a thousand bankruptcies in England and Wales. Interestingly, this is a decrease of 25% compared to October 2019 thanks to a 17% reduction in debtor applications and a 67% drop in creditor petitions.

These UK statistics reveal there are more than 700 debt collectors, which employ around 12,897 people. Debt collection agencies in the UK typically provide two kinds of services: they can collect debt on behalf of a third party, or they can acquire a debt portfolio, i.e. a ledger of debts that are collected afterwards.

36. The debt collection market in the UK was worth £2 billion.

Growing at an annual rate of 1.8%, revenue in the debt collection industry has been incredibly volatile in the past five years due to changing debt recovery rates and demand for services. Forecasts and debt statistics in the UK reveal that revenue will grow at a lower rate of 1.7% and fall to £1.4 billion this year.

Throughout the years, the finance and economy sector has gone through many changes, especially as the UK and the world face the financial implications of the pandemic. It remains to be seen just how much the coronavirus recession will affect the average debt in the UK for both households and the government. The best we can do in the meantime is to plan finances accordingly and try to boost savings as much as possible.