Ever since the beginnings of broadcasting, television has been a constant source of entertainment for people of all ages, genders, and education levels.

However, many aspects of the television industry have changed over the years, starting from content and target audiences to technology and major players in the business.

So, what does the world of television in Britain look like today?

Take a look at these fascinating TV statistics from the UK to find out.

TV Viewing Habits and Statistics in the UK 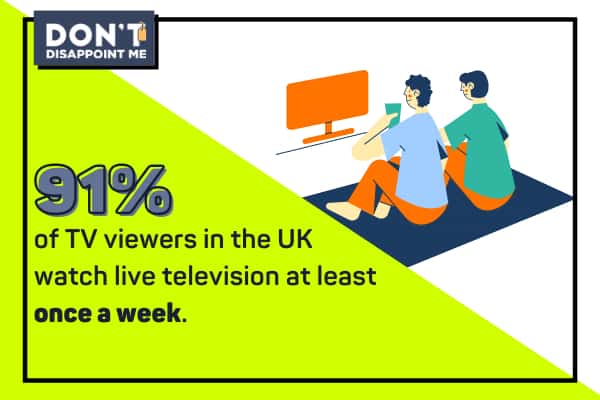 1. How many people watch TV in the UK?

In March, public service broadcasting (PSBs) witnessed an increase in monthly viewing share, primarily thanks to a rising interest in news. What’s more, March TV viewing figures in the UK had the highest monthly share in the past six years, capturing 58.8% of all broadcast TV viewing.

3. People in Great Britain watch an average of 3 hours and 46 minutes of TV daily.

According to Ofcom’s latest report, people in the UK watch TV for almost 4 hours per day. This number, which increased by half an hour compared to 2019, includes live, recorded, and on-demand TV.

4. The average time spent watching TV per day in the UK nearly doubled during the lockdown.

In April 2020, while the country was in nationwide lockdown, time spent watching audiovisual content went up to 6 hours and 25 minutes a day. This is almost double the average time Brits spent watching TV in 2019. The BBC, Channel 4, and ITV channels were widely used as a source of news about the new pandemic, spiking numbers in TV viewership.

27.68 million people in Great Britain stood in front of their TVs and watched the Prime Minister’s announcement on lifting lockdown restrictions, making it one of the most-watched television moments in history.

On the other hand, the Queen’s Christmas speech was the number one watched broadcast on Christmas day — 8.2 million British viewers followed it.

6. Tiger King: Murder, Mayhem and Madness is the most popular TV show on Netflix in Great Britain.

TV viewership data as of April 2020 point to the famous documentary Tiger King: Murder, Mayhem, and Madness as one of the most-watched TV programmes on Netflix by Brits. By contrast, in 2019 and 2018, Friends was the number one watched show on Netflix in the UK.

7. Normal People is one of the most-watched TV shows in the UK on BBC’s iPlayer.

Reports indicate that the number one TV show on BBC iPlayer for 2020 was Normal People with more than 62 million views. This Irish drama surpassed both the hit show Killing Eve (in second place with 39 million streams) and the culinary reality show MasterChef (which got over 22 million views). 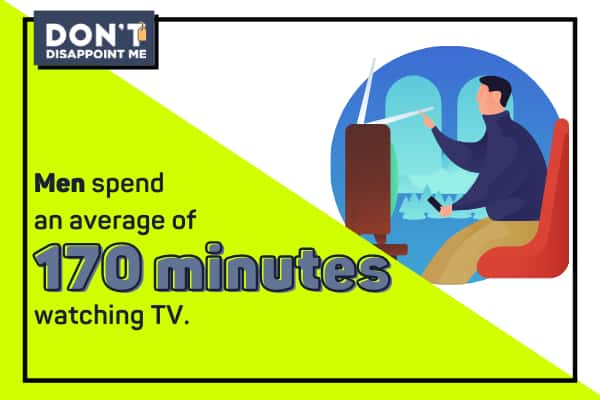 8. What age group watches the most TV?

A closer look at age demographics shows that Brits aged 75 or older spend more time watching regular broadcast TV per day than youngsters do. Young adults, by contrast, spend most of their time watching subscription video-on-demand services (SVoD). Data on daily viewing TV time by age reveals that younger generations, mainly between the ages of 16 and 34, watch streaming services for an average of two hours.

9. Like the rest of the UK, older adults in Wales watch the most TV.

Seniors from Wales (aged 54 and over) watched around 5 hours 36 minutes of television per day. Average TV screen time declined with age. Thus, 40 to 54 years olds watched 3 hours 35 minutes of TV a day, whereas children (from 4 to 15) only spent 67 minutes in front of the TV set every day.

According to 2019 TV viewer demographics, women in Britain spent an astounding 196 minutes a day watching television. On the other hand, men spend less time watching TV — an average of 170 minutes.

11. Scots watch more broadcast TV than any other nation in the UK.

Last year Scottish people were watching TV for about 3 hours and 22 minutes every day — the most compared to other UK nations. Live TV in Scotland also makes up for the largest share of daily TV viewing, despite the prevalence of streaming service subscriptions.

TV Ownership Rates in the UK 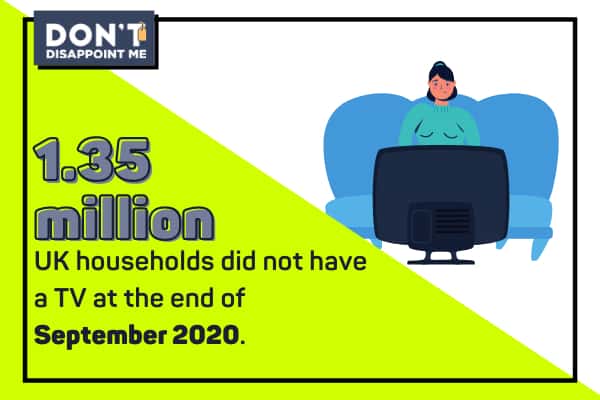 12. Over 26 million households in the UK have at least one TV set.

Judging by these television statistics, 26.8 million people living in Great Britain own at least one television set. Interestingly, 80% of them had either an HD ready or HDTV as their primary television set, while 13% didn’t watch television in high-def on their main TV set.

Smart TVs, which can connect to the internet and run various apps, have been gaining in popularity. The penetration of smart TV sets in the UK witnessed a staggering increase — from 12% four years ago to nearly 50% in 2018. One of the reasons behind the growing popularity of connected television, statistics show, is internet access. To illustrate, smart TVs account for 26% of time spent online in the UK.

Although the average price of a TV set in Britain is between £300 and £500, around 915 thousand people spent at least £1500 on their television set, 2020 facts and figures indicate.

16. Samsung is the best selling TV brand in the UK.

When it comes to popular TV brands in Britain, Samsung held the number one place in 2019 with an average of 15.8 million customers. In addition, 11 million users owned an LG TV set, and 7.4  million had a Panasonic television set — the second and third most popular brands. 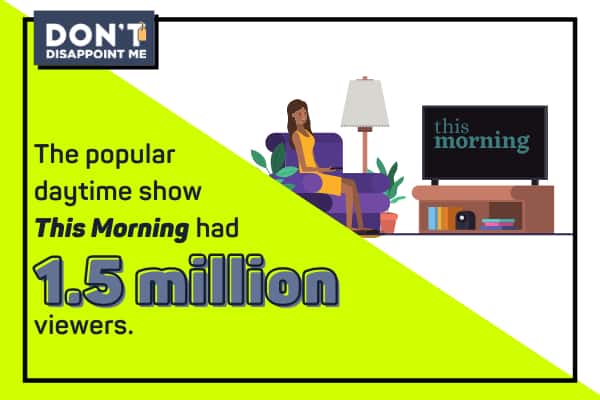 17. The average linear TV viewing time in the UK is 3 hours and 23 minutes.

Linear TV refers to traditional viewing or watching a TV programme on a  specific channel at a particular time. Data shows that in 2017, people in the UK watched almost 4 hours of linear TV programmes every day.

18. 3.98 million British households pay for cable television in the UK.

According to TV facts and stats, in the third quarter of 2020, 3.98 million households paid for cable television in the UK. Most of these households are customers of Virgin Media, which is the most popular cable TV provider in the UK.

In the UK, households must have a TV licence if they want to watch and record programmes as they are shown by UK broadcasters. They also need a licence to download or watch programmes on BBC iPlayer. A total of 25,527,840 TV licenses were provided to the people living in the UK in 2019/20, or 200,000 licenses less than 2018/19.

20. BBC One is the most popular TV channel in the UK.

As of August 2020, 76% of surveyed people living in the UK gave positive ratings to BBC One. Some of the most-watched programmes on BBC One include BBC News At Six, A Perfect Planet, Antiques Roadshow, and Doctor Who.

The biggest commercial TV channel, ITV, saw a surge in audience viewing figures for daytime programming and news during the lockdown. The channel’s two most popular daytime shows Loose Women and This Morning had a whopping 1.3 million and 1.5 million viewers, respectively. ITV Daytime, on the other hand, saw a 32% increase in the number of viewers in 2020 compared to the same period last year, daytime TV statistics reveal.

Streaming Subscription Services in the UK 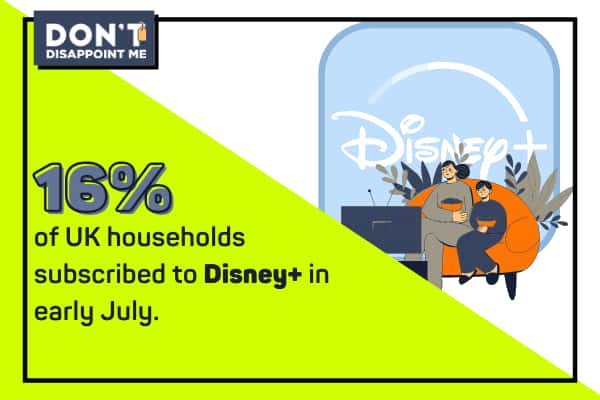 22. How many UK households have at least one streaming subscription?

By the end of September 2020, 17.52 million British households had access to on-demand subscribing services. SVoD services in the UK grow in number every year. However, they broke records in the third quarter of 2020 with over 17 million UK households subscribing to an SVoD service — an increase from 13.67 million in the same period of last year.

23. People in the UK spend an hour and 11 minutes watching SVoD services.

According to TV streaming service statistics, in April 2020 British people spent an average of 1 hour and 11 minutes a day watching Netflix, Amazon Prime Video, or Disney+, which is 37 minutes more than in 2019.

24. How many people have Netflix in the UK?

15.24 million British households had a Netflix subscription in Q3 of 2020. This is up by almost 2.5 million compared to the Q1, and an increase from 11.77 million in Q3 2019. According to Ofcom’s media report, by early July 45% of adult households subscribed to Netflix, making it the most popular SVoD service in Britain.

25. 10.18 million households living in the UK have Amazon Prime Video.

Amazon Prime Video was the second most subscribed SVoD in Great Britain with over 10 million households. Interestingly, 10% of the programme-library that Amazon Prime Video offers is UK-based content, while only 8% of Netflix content is UK production.

26. With 3.89 million subscribing households, Disney+ is also listed as one of the most popular streaming services in the UK.

Since its launch date in March of 2020, Disney+ saw high-speed growth with over 16% of the household subscribing to it in early July. Thanks to these numbers, Disney+ managed to overshadow NOW TV and become the third most popular SVoD service in Britain. Unsurprisingly, the most-watched content on Disney+ were children’s programmes.

27. 23% of Great Britain’s population subscribed to a new SVoD service during the lockdown.

Before lockdown, more than 50% of British households already had access to at least one streaming service. The numbers continued to grow very fast when the first lockdown came in place with up to an estimated 12 million adults paying for a new SVoD service in this period. What’s interesting is that 5% of these Brits, or 3 million, watched on-demand subscribing services for the first time.

In the early stages of lockdown, British people between the ages of 55-64 watched more SVoD programmes. 32% of this age group had access to SVoD service after the lockdown was initiated compared to 25% in the pre-lockdown period. The number of over 65-year-olds streaming content also increased slightly before and after restrictions, from 12 to 15%.

29. BBC iPlayer had 1.4 billion requests for its programmes in the first quarter of 2020.

30. 35% of the adults living in the UK binge-watch TV shows weekly.

TV statistics show that 35% of adult Brits are bingeing a TV show every week. From all adults in the UK, the 16-24 age group takes up the highest percentage (82% as opposed to only 29% of those aged 65 and over). Strangely enough, only 4% of British adults are binge-watching TV shows daily, whereas 19% report that they never watch an entire TV series in one sitting.

TV Advertising Statistics in the UK 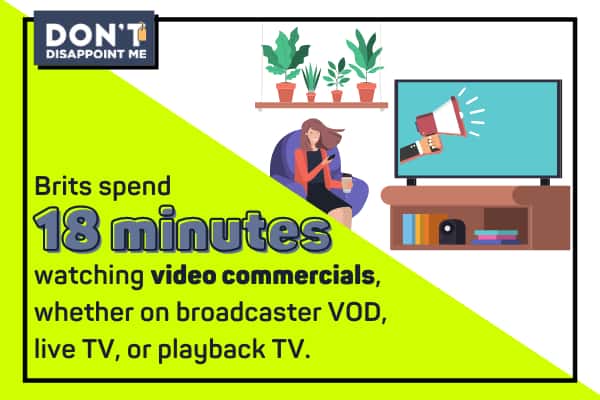 31. How many commercials do people watch annually?

32. Sky TV is the most viewed TV advertiser.

Sky TV was rated the most successful and viewed TV advertiser for 2019, with an astounding number of 21.5 billion broadcast views.

According to the forecast of GroupM, advertising expenditure will decrease by 14.8% in 2020, going down to £3.7 billion. While the pandemic will undoubtedly take a toll on television advertising revenue, TV will not be hit as hard as other media formats. Radio, cinema, and news brands are projected to experience a far bigger drop in revenue than TV.

TV Trends in the UK 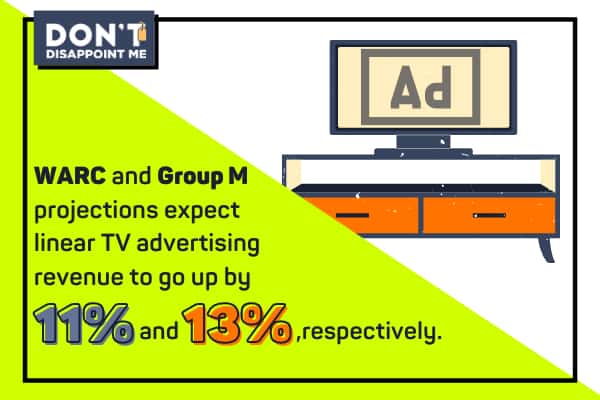 As a result of production houses being shut down due to COVID-19 prevention measures, both broadcast and on-demand services are expected to see a shortage of video content. This effect will impact autumn and winter schedules the most, as well as schedules for the first half of 2021.

36. There will be an increase of 13% of revenues for linear TV advertising.

According to data for 2021, the UK will spend over 4 billion on TV advertising. By contrast, TV advertising spend was only £3.95 billion pounds in 2018.

The subscription streaming channel BBC Select will be launched by BBC Studios for American and Canadian audiences in the first few months of 2021. It will be part of Amazon Prime Video and Apple TV, and it will also include various UK content from culture to politics. This move by the BBC only goes to show that streaming services will continue to be one of the leading TV trends in 2021.

The television industry has a huge impact on everyday life from providing us with the latest information to introducing the newest products and services available on the market. Not only does it provide entertainment and news, but it’s also a significant source of revenue for marketers, production houses, and other stakeholders in the industry.

We hope that these TV statistics from the UK have shown you how important the TV business is and how much it contributes to the day-to-day lives of millions of Brits.