20+ Thought-Provoking Texting Statistics for the UK

Have you ever found yourself in a situation when you just don’t feel like taking a call?

Texting might just be the answer to your problems.

Mobile texts are not just for younger generations anymore. With over 60 billion messages being sent a year, texting has become a vital part of everyday life and an essential tool in marketing and ecommerce.

Want to know how it works? What do Brits like and dislike about texts? Who sends the most messages?

These texting statistics from the UK will give you the answers. 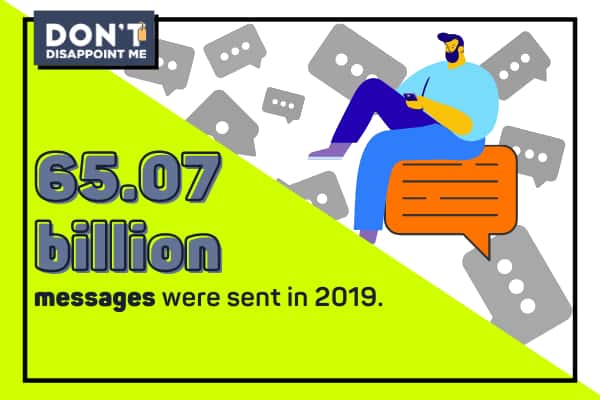 This number might seem impressive, but SMS stats indicate it’s actually a drastic decline from the 16.50 billion SMS and MMS sent back in Q2 of 2019. The significant drop is primarily due to the popularity of messaging apps like WhatsApp and Facebook Messenger.

But how many text messages are sent a year in the UK?

2. 76% of Britons send texts a couple of times during the day.

Undoubtedly, texting has become a daily activity for British people.

According to text messages statistics, the majority of the Brits surveyed sent SMS and MMS a couple of times a day. On the other hand, 4% stated they never took part in this activity.

According to a 2019 survey by Statista, 57% of women sent or received mobile messages at least a couple of times a day. The same is true for 53% of men.

On the other hand, 20% of female respondents said they texted every day, opposed to 18% of men.

Research suggests the average person in the UK sends about 50 messages a week. However, texting statistics by age point to 12-15 year-olds as being the biggest fans of texting—sending around 200 messages weekly.

Girls are keener on texting than boys—British girls aged between 12 and 15 send around 221 text messages a week.

5. People in the UK open 95% of the messages they receive.

A study shows that almost 75% of people read every message they get, while a third only read SMS from known senders.

18 to 24-year olds account for most of the opened text messages, as only 5% of this generation don’t read the texts they receive.

6. Texting makes up a third of all activities on smartphones.

Other fascinating data about texts revealed that:

7. Almost a third of British people use EE.

EE is the most widely used mobile provider in the UK, Ofcom’s report shows. In the first half of 2020, 27% of those polled chose this as their preferred network. Since it provides an impressive 96% coverage and great prices, it’s not surprising why so many Brits would use this company’s services and pick it over other mobile and SMS companies in the country.

8. In the second quarter of 2020, SMS and MMS generated £120 million in revenue for telecommunication companies.

This number is a significant decline compared to the same period of 2019 when text messages raised £138 million in revenue. Recently, income from mobile messages has gone down primarily owing to the widespread use of messaging apps.

Texting Statistics in the UK 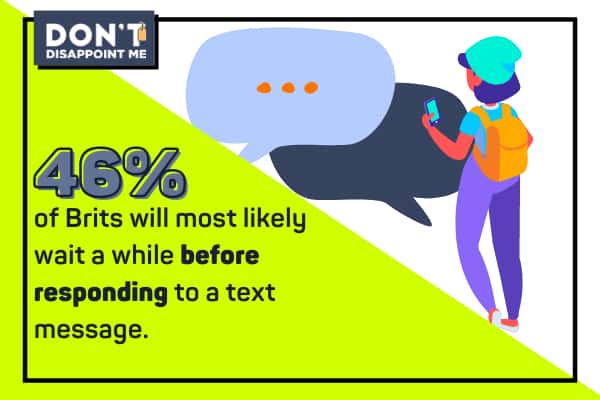 9. 55% of British people would rather text than receive a phone call.

Texting vs calling statistics from the latest YouGov survey reveals more than half of Brits would rather send messages than talk to someone on the phone. By contrast, only 31% said they prefer voice calls to mobile texts.

The survey also reports that:

For a third of people in the UK, the average text response time is a couple of seconds so as not to offend the sender. A higher percentage (46%) will most likely wait a while before sending an answer. 3%, on the other hand, never bother to send an answer at all.

11. People in the UK expect a reply to their text within an hour.

35% of Brits said they couldn’t care less about the text messages’ response time. However, 19% of both men and women think the best response time is no later than an hour.

12. 22% of Brits don’t appreciate slangs and abbreviations in their texts.

UK texting statistics revealed that 24% of British men are most irritated when receiving texts with slangs or acronyms. Similarly, 19% of women find it annoying when they receive several messages instead of one straightforward text.

Further facts on likes and dislikes indicate that:

13. 66% of UK people don’t stress about the number of messages they have to reply to.

66% of Brits don’t stress about the number of messages they have to answer. By contrast, 20% of them have trouble keeping up with the increasing number of texts they receive, while 10% tackle the stress of too many messages by ignoring them.

14. 45% of people texting use sarcastic messages.

Viber’s research from 2018 implies that almost half of Britons interviewed used sarcasm in their text messages, BUT knew when they were misunderstood. Still, 23% of them don’t use sarcasm in their messages, knowing that it can be easily misinterpreted.

A typical Brit is usually a member of six chat groups, and a small percentage (2%) are part of at least 50 groups. Texting in such a big number of group chats is more common among youngsters—7% of people aged 18 to 24 join 50+ group chats.

On the other hand, 33% of Brits said they dislike group chats.

Texting statistics indicate that 30% of British people think it’s fair to sext one person, whereas 16% believe it’s OK to sext as many people as you want (provided you message them separately).

35% of British people have done more drunk texting than Americans (24%). For the most part, drunk text messages are sent by people between the ages of 24-39. What’s interesting is that 44% of the men polled in Britain account for drunk texting. 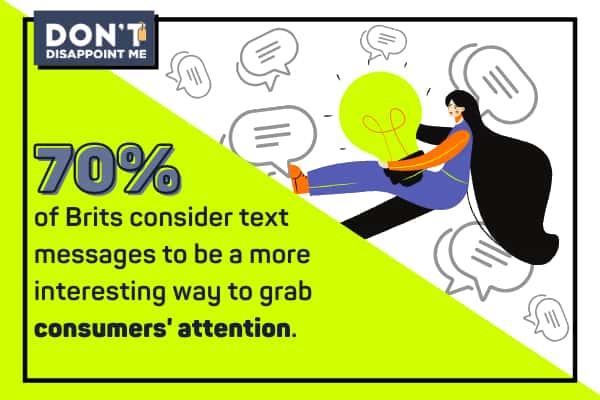 18. 38% of British businesses are expanding their SMS marketing strategies.

Not only do 64% of Brits want to see more SMS marketing, but 70% also consider text messages to be a more interesting way to grab consumers’ attention.

On top of that, data indicates that:

20. Despite the popularity of SMS, 73% of marketers still see email as the best digital channel for ROI.

In fact, email statistics show that 86% of marketers find this digital channel to be “very important” for their marketing strategy. This data is not surprising, considering that email marketing generates approximately £29 billion in retail sales annually in the UK alone. 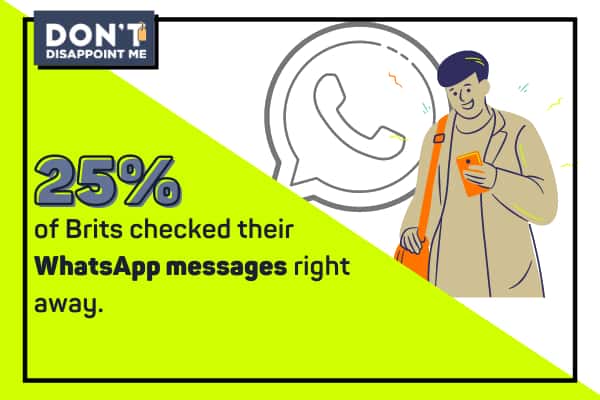 21. WhatsApp is the most used messenger app in the UK.

81% of adults under the age of 64 use WhatsApp regularly, making it the most popular messenger service in Britain.

More WhatsApp stats in the UK reveal that:

Facebook Messenger is the second most popular messaging service in the UK, used by 75% of adults between the ages of 18 and 64. With a 25% penetration rate, Snapchat is ranked third, while Skype (15%) and Discord (6%) round off the top five messenger apps among British adults.

As of 2020, Snapchat reaches an advertising audience of 18.70 million people, going up by almost 5% in the last quarter. However, even this increase is not enough to take WhatsApp down from the number one position. 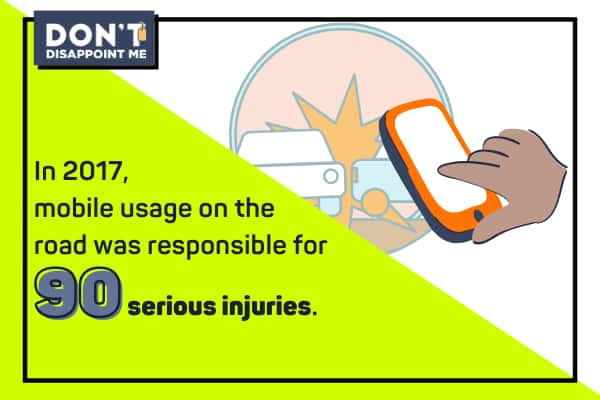 24. 16% of the UK drivers admitted they used their phone to text while driving.

Texting can significantly contribute to the number of road accidents.

In 2017 alone, mobile usage on the road was responsible for 308 small injuries, 90 critical injuries and 33 fatalities.

On the other hand, texting while driving statistics indicate that 90% of respondents think texting can cause a distraction while driving.

Even more disturbing is the fact that sexting carried out by children has increased by 183% during the lockdown, with 55% of texting taking place during school hours.

Are mobile messages a thing of the past? According to the texting statistics we just read, the answer is a definite ‘no’. Billions of SMS and MMS are still sent every year in the UK, whether to communicate with friends, reach out to customers, or boost conversion rates. It seems that despite the growth of online messaging services, texting is here to stay.